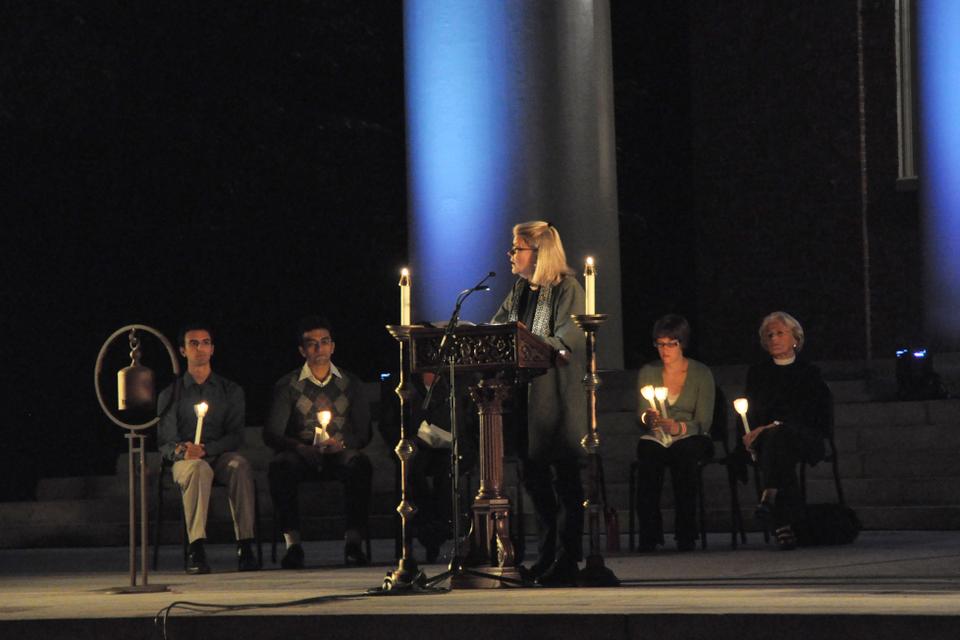 As attendees bowed their heads in a moment of silence at a prayer vigil Sunday night, a plane roared by overhead. The sound of jet engines provided a haunting reminder of the terrorist attacks that a crowd of several hundred people had gathered to commemorate in Tercentenary Theater.

With the columns of Memorial Church illuminated in blue lighting, students gathered before its steps holding lit candles and listening to the testimonies and reflections of Harvard students and faculty members. The University Choir sang several hymns, and the Kuumba Singers opened the program.

“This event allowed us to realize that our borders are just dotted lines,” Professor of Comparative Religion Diana L. Eck said. “There is no strength in bricks and stone, but only strength in the relationships that we build.”

During a series of events Sunday, the University commemorated the terrorist attacks of September 11, 2001, mirroring similar events around the country as it remembered a day that has become a defining moment of the past decade.

In a sermon at Memorial Church that began the day’s events, Harvard Kennedy School Professor David R. Gergen encouraged a renewed sense of compassion in America in spite of a decade characterized by wars, economic shock, and “political lunacy.”

“We have entered a dark wood, as Dante would call it, and we are yet to see the light,” he said.

ith standing room only, the service drew a crowd of both regular churchgoers and other members of the Harvard community.

After September 11, 2001, Americans sought to embrace their own families—but Gergen argued that in the future Americans should demonstrate their compassion by seeking to embrace a broader community. Social challenges such as rampant unemployment and economic inequality often escape the discussion at religious centers, Gergen added.

“These are challenges we talk about in classrooms around Harvard,” he said. “But do we talk about them enough at Memorial Church?”

Considering how America should move forward in the next decade, Gergen said that compassion for one another will be essential.

“The larger threat comes from what we are allowing to happen to each other,” he said.

At the Harvard Interfaith Collaborative and Harvard Chaplains’ “Conversations on the 10th Anniversary of 9/11” event later in the day, students and religious officials agreed that Americans still have a long way to go in aftermath of 9/11.

“We are still talking in terms of a very polarized world—and of ‘us’ and ‘them,’” said Samir Selmanovic, the founder of the inter-religious community “Faith House Manhattan” and the event’s keynote speaker.

In the “post-post 9/11” world, Selmanovic said that Americans need to change the nature of current discourse about the attacks.

“A lot of interfaith discussion has been about the past instead of looking to the future and actually providing some kind of prototype or some ideas or new experiences—a new history that we can refer to,” Selmanovic said. “We want forward-looking people to have new stories.”

Attendees had the opportunity to share their stories with one another during breakout sessions at the end of the event.

“It was really nice to hear people’s individual 9/11 stories,” said Yacine Fares ’15. “It touched on a lot of questions that I’ve had for a while and gave some answers.”

“Being a Muslim in America did not mean the same thing,” said Lutfeali, a Shi’a Muslim, referring to discrimination faced by members of her religion in the attacks’ aftermath. “Muslims were not considered people.”

Like earlier speakers during the day, Director of the Mahindra Humanities Center Homi K. Bhabha instructed audience members at “The Art of Survival: A Tenth Anniversary Observance of 9/11 in Words, Music, and Dance” in Sanders Theatre to continue to consider the societal implications of the terrorist attacks.

“This is an opportunity not only to remember, but also to reflect upon the state of the world and the meaning of survival and solidarity for us today,” he said.

Bhabha’s remarks preceded a series of readings and performances portraying individuals’ varied experiences in the wake of the “day that began like any other and ended like no other in recent history.” Speakers interpreted the testimonies of the first emergency response workers to arrive at the scene of the terrorist attacks, in addition to reading the letters of deceased American soldiers written to their families while serving overseas. These interpretations were punctuated by musical selections.

“The wanton and willful violence turned the public spaces of civic life into a theater of war,” he said. “The everyday is eclipsed and estranged by a sense of disorientation and exposure from which there is no place to hide.”

As a testimony to the sense of chaos experienced as a result of the attacks, Elizabeth R. Moroney ’12-’13 described the confusion that she felt in witnessing the violent reprisals that occurred in the days that followed 9/11.

“I cannot find a productive reason to support the pernicious, contagious bargaining tool that not only breeds terror but also incites the terrible bigoted responses to it,” said Moroney, whose father died in the attacks, during remarks at the prayer vigil.

A short hymn from the University Choir signaled the vigil’s end. As the singers slowly exited, few people moved, lingering for several minutes as the candles were put out one by one.