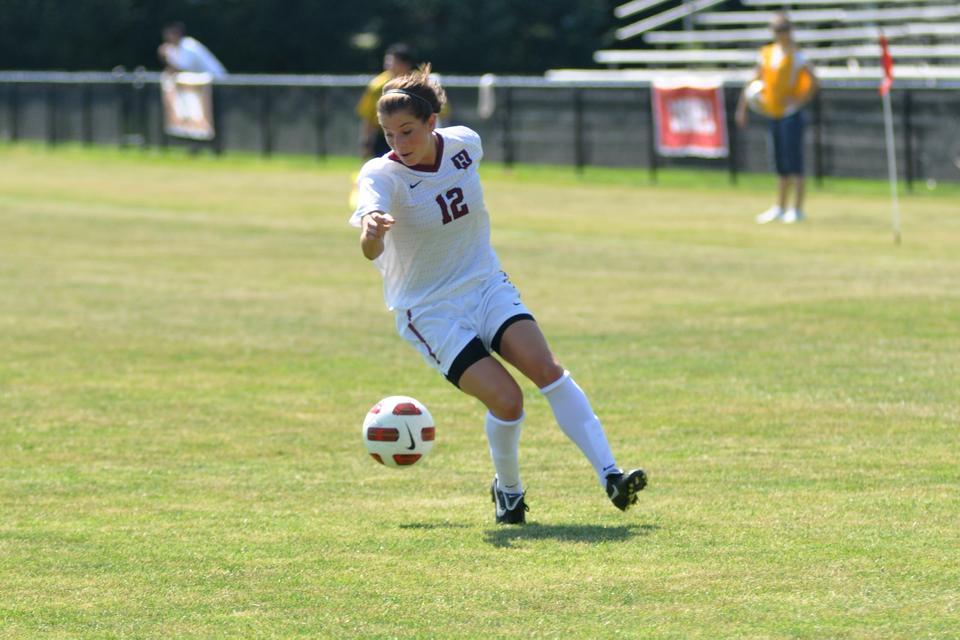 The Harvard women’s soccer team (3-1) has good reason to be confident as it hits the road to face Boston University (5-2-1) tonight at 7 p.m.  With weekend wins over UMass and UConn—two teams that have beat the Terriers in the past week—the Crimson looks to tack a third straight loss to the home team’s record.

BU began its season 5-0-1 and posted its best start since 1996, earning a No. 20 ranking before dropping two straight games last weekend and losing its spot on the poll.

This will be Harvard’s first match against a team that has been nationally ranked this season.

“We’re going to treat it as a really good opportunity to show everyone what we can do,” said freshman midfielder Lauren Urke, whose goal and assist in Sunday’s 2-1 victory over UConn earned her Ivy League co-Rookie of the Week honors.

The Crimson has dropped three of its last four contests with BU, including a 3-0 shutout at Ohiri Field last year. Harvard still owns an edge in the all-time series, boasting a 6-3-3 mark.

The Crimson hopes to earn its first road win of the season at Nickerson Field, dropping its only other matchup as a visitor against Long Island University on Sept. 2.

“We come into these games not expecting anything but knowing we have nothing to lose and everything to gain through hard work and 100-percent effort,” Urke said.

Hard work and effort will remain pivotal to the Crimson’s success, but stability in goal will also prove important. After sophomore keeper Jessie Wright was taken to the hospital early in the first half of Sunday’s game against UConn for concussion tests, freshman goalie Cheta Emba had to step in.

Emba had a solid performance, recording four saves and allowing no goals against a UConn team that took 11 shots.

“Cheta was called upon and stepped right into the role and was calm and made sacrifices for the team,” said junior midfielder Alexandra Conigliaro—a Crimson sports comper—who scored the game-winning goal on an assist from Urke on Sunday.

“We’re going to wait to see who is healthy enough to go. It’s been a crazy couple of games, that’s for sure,” Crimson coach Ray Leone said. “Jessie Wright is healthy, she is okay, but she is definitely not going to play in the game on Wednesday. But we’re just thankful that she’s okay.”

The keeper that ultimately ends up in goal tonight will face an aggressive Terriers squad. BU outshot UMass, 22-3, in a 1-0 loss on Sunday afternoon.

Harvard’s goalie will need to be especially alert whenever Terrier sophomores Madison Clemens and Megan McGoldrick get near the net, as the two each took five shots in their last game.

BU also boasts the presence of senior Jessica Luscinski, who was voted as the America East 2010 Striker of the Year for her 12 goals and seven assists last season.

She and Taylor Krebs pace the team with three goals each. Strom has chipped in two this season.

Regardless of whoever is in goal for Harvard, her Crimson teammates will not worry about the goalie situation.

“Right now, all of our keepers are amazing, and so with any of them in net, I would feel completely confident about their abilities,” Urke said.

“Having so many injuries in the past couple games has been tough, but no matter who’s in goal, every single goalie has stepped up to the plate,” Conigliaro echoed.

Recognizing that BU’s two straight losses by no means guarantee a victory tonight, Conigliaro added that “the wins so far have been giving us confidence but we know we still have a hard fight for sure.”

Harvard has seen six different players score goals, demonstrating a well-balanced offense led by co-captain Melanie Baskind, who has scored two goals and assisted on two others. She will certainly be targeted by a Terrier defense that has only allowed seven goals in eight games.

“BU is an awesome team. They’re so well-coached,” Leone added. “I’m just excited for the opportunity.”