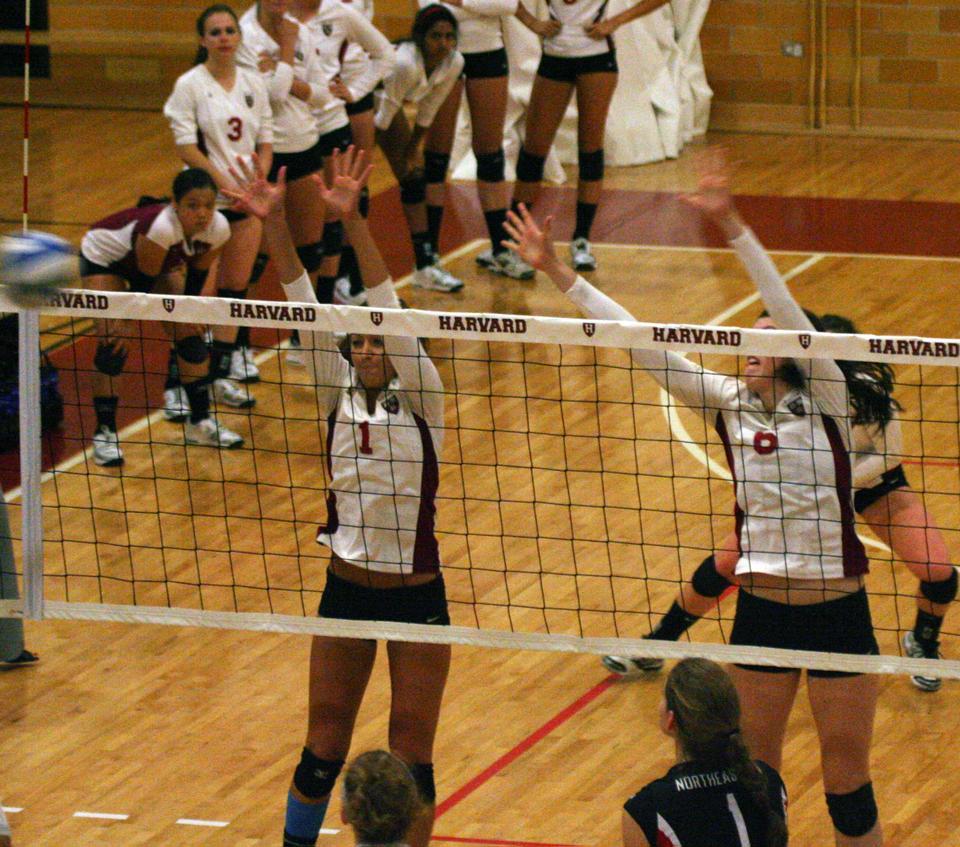 Sophomore Erin Cooney collected 28 kills over three matches during this weekend’s Harvard Invitational—during which the Crimson went 2-1—and is currently third on the team with 82 kills on the season.
By Chelsea Gilbert, Contributing Writer

After falling in a difficult final match to Northeastern (10-2), the Harvard women’s volleyball team (7-3) finished second overall at the Harvard Invitational this past weekend. With wins on Friday and Saturday, the Crimson finished its first home tournament of the year with a 2-1 record as it prepares to begin the Ivy League slate.

Matched up against their toughest opponent in the last match of the tournament, the Harvard women suffered a disappointing loss, falling, 24-26, 25-20, 25-18, and 25-21. Although the Crimson was able to edge out the Huskies in the first set, it could not overcome the strong serves and seemingly flawless attacks executed by Northeastern all night. Although both teams entered the final match without dropping a set, it was the Crimson that was unable to continue the momentum it had built over its wins on the weekend.

“It was the first team we had seen that didn’t make a lot of errors,” sophomore Erin Cooney said.

The Crimson fought hard in the first set, highlighted by impressive hits by junior Taylor Docter and a final kill by sophomore Teresa Skelly.

But after its initial win in the first frame, Harvard could not overcome the service errors and ball control problems that plagued it throughout the remainder of the match. Once Northeastern took the lead in the second set, it built upon it, winning the next three games and taking the tournament title. The Crimson put up the most fight in the fourth and final set, taking a 21-20 lead off of a kill from Docter. But Harvard was unable to keep the control of the match when the Huskies posted three consecutive kills to put them up for good, after which two service aces sealed the Crimson’s fate.

“We went point for point with them, but they had better ball control,” coach Jennifer Weiss said. “Northeastern was an aggressive serving team ... We learned a lot from playing them.”

Despite the loss, two Harvard players—Cooney and co-captain Christine Wu—were recognized for their contributions over the weekend, garnering spots on the All-Tournament team.

The accolade was nothing new for the veteran Wu, who has earned All-Tournament recognition in every competition in which she has played this season.

Navy had two attack errors in the first few plays of the game, putting the Crimson up immediately.

A mixture of quality serves by co-captain middle blocker Sandra Lynne Fryhofer and well-constructed attacks by Harvard led the team to an early victory, completed with a final kill by Docter.

Navy built up a 7-3 lead against the Crimson in the second, but Harvard didn’t give in. A combination of freshman libero Sindhu Vegesena, sophomore setter Natalie Doyle, and Fryhofer got the Crimson back on track to take the second set from Navy. A similar situation arose in the third set, when the Mids build an early four-point lead, but Harvard was able to battle back again. Wu stepped up to the line and launched nine fantastic serves in a row, turning the score around. Docter, Casey, and Fryhofer continued to hit kill after kill, closing the game against the Mids.

Casey had a strong series of serves in the first set of the game, which was ended by Skelly’s final kill.

Although the Crusaders came ready to fight in the second set—narrowing the gap in the score—Harvard refused to let them take the lead.

When Holy Cross was caught out of rotation, putting the score at 24-22, the Crimson seized the opportunity to finish the second set. The Crusaders took an early lead in the final set, but Harvard came back with a succession of kills from Casey, sophomores Skelly and Cooney, and Docter to seal their victory against Holy Cross.

It was the second time in two weeks that Holy Cross and the Crimson had been pitted against each other. Harvard blanked the Crusaders on both occasions.

“We’ve played Holy Cross already, so we knew their tendencies,” Wu said. “We did an even better job of playing Harvard volleyball and playing in our system.”

The Crimson will move into its Ivy season on Saturday when it faces Ancient Eight rival Dartmouth.