Long Road Ahead to the Dallas Cowboys 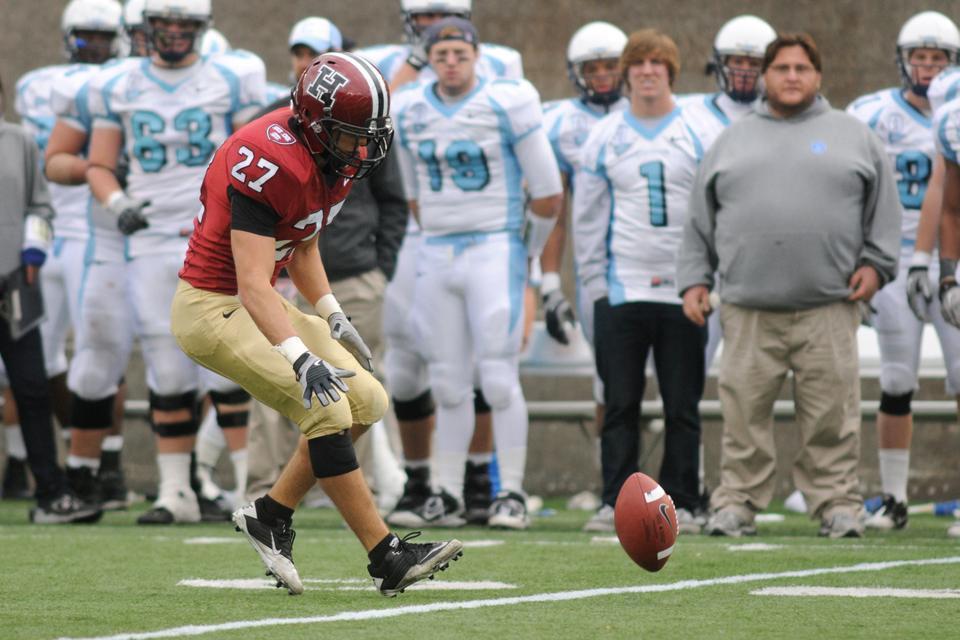 Collin Zych ’11, shown here during his Harvard years, was recently cut from the Dallas Cowboys’ regular season roster. Despite also working in finance, he maintains a shot at making the team’s practice squad.
By Alexander Koenig, Crimson Staff Writer

Around 300 rookies reported to NFL training camps with the hopes of making a team this summer, including former Crimson captain, Collin Zych ’11. With the possibility of a future with the Dallas Cowboys, Zych had more on his plate than just the uncertainty of the NFL lockout and the grueling workouts during a stretch of 40 straight days of triple-digit heat this summer.

He was also working at Cogent Partners as a private equity markets analyst on the side.

“I haven’t really had much free time this summer,” Zych said. “During the lockout I was working during the day and staying in shape whenever I could. Then once training camp started, my days were packed full. It was tough, but it’s what I wanted to be doing.”

The discipline that is necessary to work two jobs is nothing new for Zych, an Academic All-Ivy Leaguer his senior season.

“It’s hard for people to understand how good he is, because it isn’t just that he can run and jump and hit people hard—he has a gift that not many people have,” Crimson coach Tim Murphy said. “Everything happens for him in slow motion.”

While quarterbacks are often credited with leading direction on the field, Murphy attributed this to Zych in addition to a keen awareness of the play around him.

The Dallas Cowboys’ defensive playbook contains calls as complex and varied as any class syllabus. In order to be considered for the team, Zych had to learn all of them.

“I went to training camp with the backpack that I had used while at Harvard and I ended up having to buy a duffle bag just to fit all the playbooks,” Zych said. “It was definitely an interesting experience. The learning curve is steep.”

Zych, a Dallas area native and two-time first-team All-Ivy accolade winner, will be the first to tell you that he played both with and against many talented players while in the Ivy League. But nothing the Ancient Eight has to offer can compare to the level of competition that exists in the NFL.

“Some of the guys here are amazing, but I think my time at Harvard prepared me in some ways for what to expect,” Zych said. “Juggling multiple things at the same time was something I definitely got used to as a student-athlete at Harvard. During training camp, I’d come back to my room and be studying the playbook all night in the bathroom while my roommate was passed out on the bed.”

Though Zych is hardly the first Harvard graduate to try out for the NFL, it is his path to the Cowboy’s tryouts that sets him apart. Unlike most recruited athletes who have enjoyed his type of success, Zych had to reach out to Crimson recruiters his senior year of high school, not the other way around. He did not appear in a single game during his freshman year—not even for the JV squad.

Similarly, at 5’11” 195 pounds, he is at a physical disadvantage. The next Cowboy on the depth chart at safety is 6’1” 222 pounder Danny McCray out of Louisiana State University.

“He may be a little undersized, but he’s athletic enough to play corner, he’s a tremendous tackler, and he’s extremely savvy,” Murphy said. “He is always, always, always in the right place at the right time.”

Hopefully for Zych, his run of success in football hasn’t ended yet. With the NFL season officially starting on Thursday night, it is still unclear whether Zych will be signed onto the Cowboys practice squad or be left to pursue his dream elsewhere.

“A lot of my future depends on the right opportunity arising,” Zych said. “Being one of the final cuts, I’m confident that the coaches liked what they saw with me, and hopefully if something comes up, they’ll come calling.”

Regardless of how things go with the Cowboys, if there’s anything the past four years have taught us, it’s that, true to form, Collin Zych is preparing himself to be in the right place at the right time.