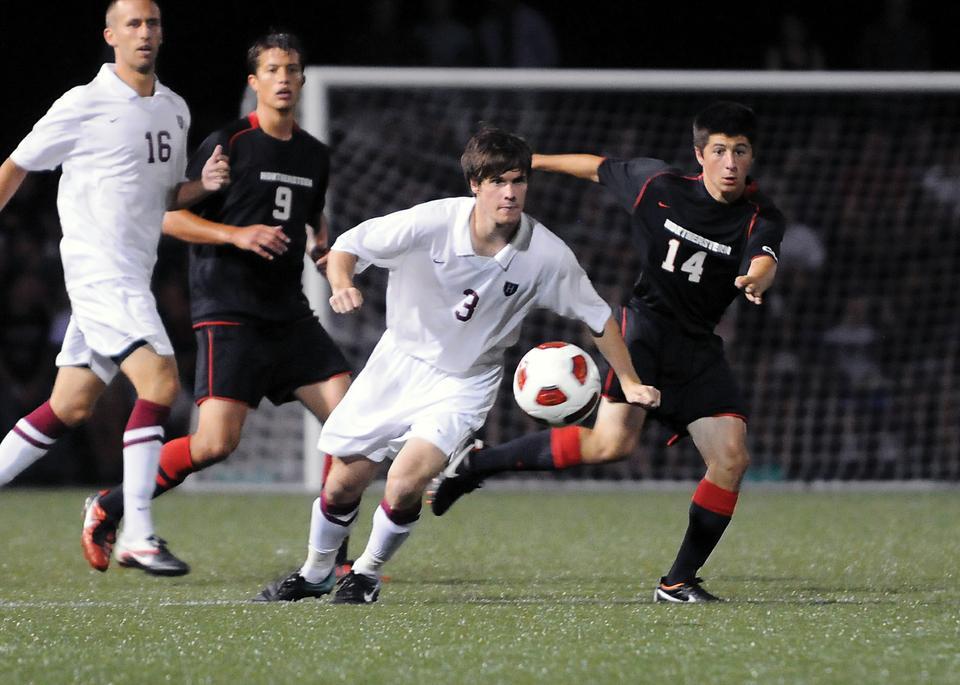 Junior co-captain Scott Prozeller looks to pass the ball in the Crimson’s 1-0 victory against Northeastern. Soldiers Field Soccer Stadium was packed with 2,500 fans for the men’s soccer team’s annual start of the season under the lights. The squad will travel to New York Friday to face St. John’s.
By Scott A. Sherman, Crimson Staff Writer

It’s been raining all week in Cambridge, and now the Harvard men’s soccer team is about to be hit with a red storm.

Coming off a dramatic season-opening win against Northeastern on Sunday, the Crimson (1-0) travels to Queens, N.Y. tonight to take on No. 25 St. John’s (2-1) in what will be an early-season test for a Harvard team looking to reestablish itself as one of the nation’s elite.

“St. John’s is a really good team, and they pressure the ball really well,” explained junior forward Brian Rogers, the team’s leading scorer in 2010. “If we get rattled, if we get disjointed because of that pressure, then it’s going to be a long night, but if we’re able to keep our composure and play our game and withstand the pressure, then I think we’ll have a lot of success.”

After falling to No. 2 Maryland in its season-opener, the Red Storm responded with road wins against then-No. 8 William & Mary and Boston University before returning home to face the Crimson tonight in what will be the first-ever meeting between the two teams.

St. John’s is led offensively by senior Pablo Battuto Punyed, who tied for the team lead with five goals last season. Junior Jack Bennett has paced the squad thus far with four points on two scores, both of which were game-winners. In net, sophomore Rafael Diaz returns after sporting a 0.84 goals-against-average as a rookie and has five saves on the year thus far.

Last season, after winning its first two games, the Crimson went 14 consecutive matches without scoring more than one goal. On Sunday night, the team again struggled to generate any offensive firepower until the 82nd minute, when Rogers broke a scoreless tie with his game-winning score.

If Harvard is going to win against a tougher opponent this evening, Rogers says a faster offensive start is imperative.

“We struggled a little bit with this last year,” the junior explained. “Offensively we didn’t score that many goals. It was something as a team we worked on a lot over the offseason; it’s always easier to win a game if you score early. It gives your team extra energy and deflates the opponent.”

But getting off to a quick start in Queens will be no easy task, as St. John’s allowed just three shots-on-goal in its recent pair of shutout wins, including zero against the Terriers. Red Storm senior Connor Lade is coming off a Big East Defensive Player of the Week accolade.

“We’re not going in there scared at all,” senior midfielder Jamie Rees said. “We’ve got to go in and play well. It’s going to be hard because it’s on the road but we’ve done it before.”

Two days later, the Crimson will come back home to play Rhode Island in a Sunday afternoon contest. Coming off a 3-13-2 season, the Rams (1-4) have gotten off to a slow start once again in 2011, losing three one-goal contests before being trounced, 4-0, at Florida Gulf Coast last time out.

In 2010, four players paced the team with just two goals and four points, while senior Peyton Warwick allowed 2.07 goals-per-game. This season, freshman Matt Sykes and junior Matt Ribbens lead the team with 13 and 12 shots, respectively, while sophomore Joey Haught and senior Franco Lo Presti have each scored a goal.

That Rhode Island offense will attempt to make something happen against Harvard senior goalie Austin Harms, who was brilliant in recording his 17th career shutout against Northeastern. Though the keeper finished sixth in the conference in goals-against-average last year, continued strong performances from Harms would go along way towards mitigating the Crimson’s offensive struggles.

Facing a squad that went 0-9-0 on the road last season, Harvard knows Rhode Island is a team it should beat at home.

“I think they have some talented players, and they’re a team that’s looking to bounce back,” Rogers said. “It’s definitely going to be a hardworking team, similar to Northeastern, and a team that we can’t have a let down against after a big game against St. John’s if we want to beat them.”

After witnessing how a 2,500-person crowd can help will a team to a dramatic victory, Rogers knows the importance of home field and believes the momentum stemming from the Northeastern game has the team going in the right direction heading into this weekend.

“It was a great way to open the season,” the forward said. “Winning is something that’s contagious, and when things are going well people are more optimistic, there’s more confidence, so I think we’re all excited.”