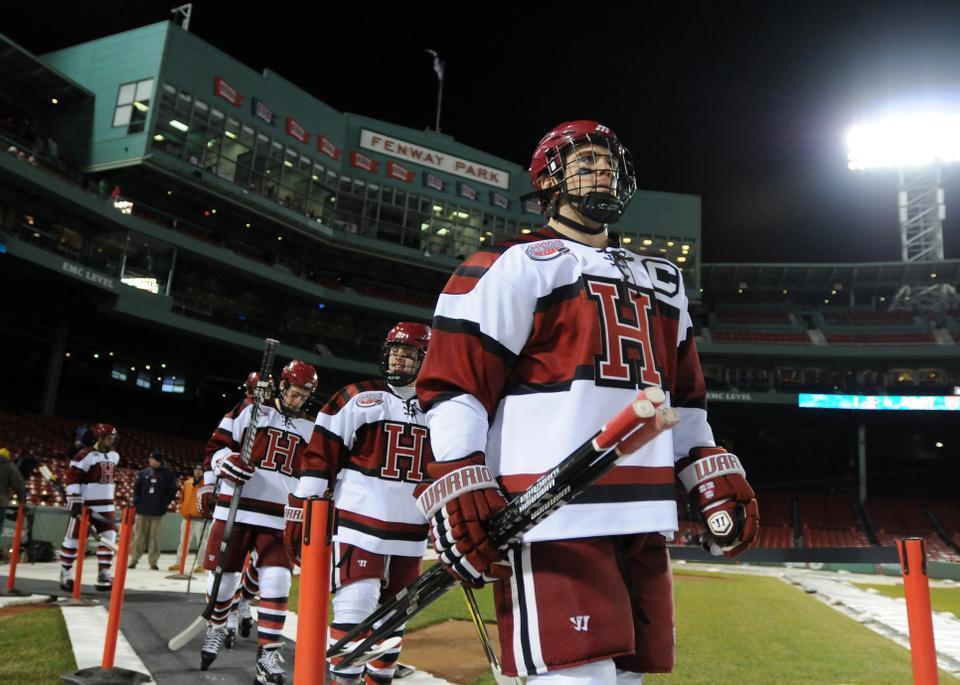 BOSTON—As it turns out, Fenway Park in January can be pretty cold.

The century-old home of the Boston Red Sox hosted Friday night’s Harvard-Union matchup—Harvard, technically, was the home team—and conditions in the outdoor game were anything but standard for hockey.

At the beginning of each period, the ice, maintained by Zambonis stored under the centerfield bleachers, appeared well-maintained and the puck moved well throughout the first several minutes. But towards the end of each frame, the ice looked to thin out, and players noted the erratic movement of the puck.

“It wasn’t too much of a factor in the game. It was kind of actually a cool thing,” senior defenseman Ryan Grimshaw said of the conditions. “[The puck] was a bit bouncy out there. … The one key was to keep it simple and get it up quick.

The rules were even adjusted to try to account for the wind. Midway through the third period, the Crimson and the Dutchmen switched sides to give each team an even 30 minutes on both ends of the makeshift rink.

“My toes were pretty numb,” Union coach Rick Bennett said when asked about the conditions of the game.

In one of the game’s pivotal moments, the Fenway rink cost Harvard a chance at taking the lead. All night, the nets were knocked loose several times on both sides of the ice.

About four minutes into the second period, senior forward Daniel Moriarty passed from behind the net to senior defenseman Peter Starrett, who appeared to knock in the game’s first goal. But replay showed that the net came loose just moments before the puck went in, and the goal was waved off.

“The swing where we had a goal called back, and they scored with three seconds proved to be too big a hurdle for us to overcome,” Harvard coach Ted Donato ’91 said, referring to Union’s first goal in the closing seconds of the second period.

Despite the tough conditions, players on both sides enjoyed the unique opportunity to play at the historic baseball stadium in front of 8,981 fans.

“It was definitely a rewarding experience, and something I will never forget,” Grimshaw said. “We got presented the opportunity to play at Fenway, [and] we jumped right on it. It’s obviously an opportunity you can’t pass.”

When the Crimson played the Dutchmen one week ago in Schenectady, N.Y., the visitors went into the final period down two goals.

But Union surrendered two Harvard scores in the first seven minutes of the third, and the two teams tied, 3-3.

In the first period of Friday’s game, it looked like the Crimson had carried some of that momentum into Fenway Park, outshooting Union, 11-8, and missing narrowly on a few chances.

“Coach [Rick] Bennett actually mentioned between the first and second that it was going to be a greasy goal,” said Union’s Mat Bodie, who scored the game’s first goal. “He mentioned it was going to go off a guy’s butt, and I’m pretty sure it did. Bit of a lucky bounce, but we’ll take it.”

Union scored again early in the third period, and Harvard could muster little offense in the final 20 minutes of the game, taking just two shots and never seriously threatening the Union net.

I (HAVEN’T) GOT THE POWER

All season, the power play has been one of Harvard’s strengths. Until Friday night, the Crimson hadn’t failed to score at least one power play goal in over two months.

The Crimson went on the power play twice against the Dutchmen, both in the second period. The team had its chances—senior forward Alex Killorn and junior forward Marshall Everson each narrowly missed goals—but the team could not convert on its chances around the net.

Union scored its first goal on the power play after Harvard freshman defenseman Patrick McNally went to the box for tripping, and the Crimson never recovered from its one-goal deficit.

Even so, the Dutchmen could not capitalize on many of their own chances. The team was one for five with the one-man advantage, squandering two opportunities in the third period to pad its lead.

"I’m just glad we got the two points, and glad for Troy Grosenick," said Bodie of the Union goaltender, who finished with 18 saves. "I think he was great in net. He really deserved that shutout."

—Staff writer E. Benjamin Samuels can be reached at samuels@college.harvard.edu