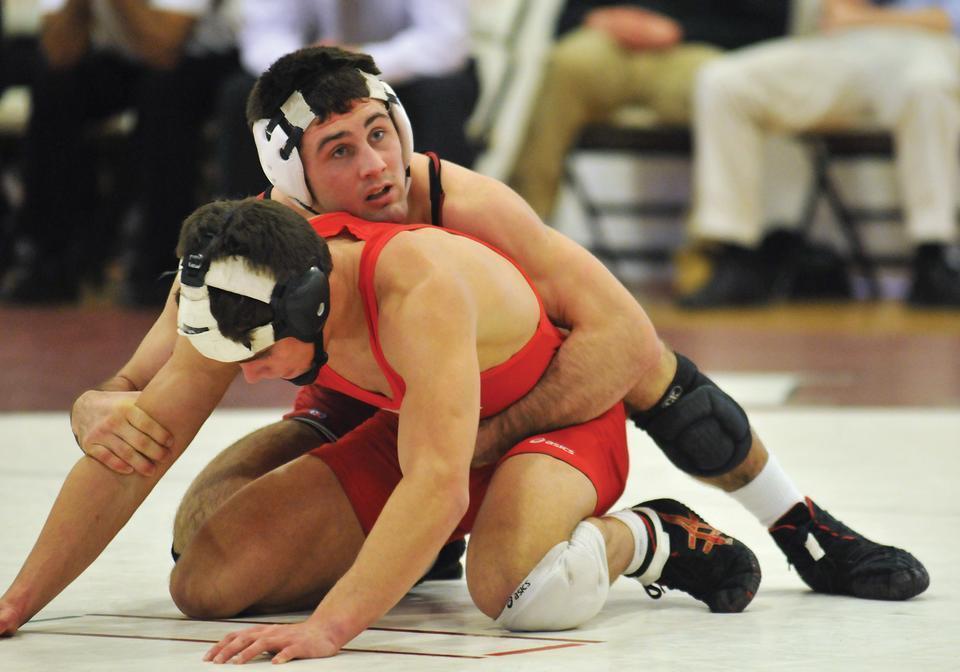 The saying is that everything is bigger and better in Texas, but that did not prove to be the case for the Harvard wrestling team on Saturday.

No. 5 junior co-captain Walter Peppelman and freshman Josh Popple were the only two Crimson wrestlers to post perfect 3-0 records at the event, held at South Grand Prairie High School in Grand Prairie, Texas. Peppelman’s three victories included two falls, bringing his season total to eight and his career total to 24.

No. 12 co-captain Corey Jantzen, who returned to action last weekend after sitting out the past year due to injury, secured a 2-1 record for the day, including an upset over No. 7 Nick Lester with a 7-6 decision.

Harvard fell behind in the dual early on and Oklahoma’s (8-2, 2-1 Big 12) seven victories never gave the Crimson a chance to get back into it. The Sooners lineup included six wrestlers in the top 20 of their respective weight classes compared to just three for Harvard. Peppelman, Popple, and Janzten were the only winners for the squad, each winning their matchups by decision.

“Oklahoma’s a very tough team,” junior Steven Keith said. “It’s just a different beast, as an Ivy League team competing against a Big 12 team, and I think we did well, so I was pretty pleased with the way we finished off.”

Jantzen pulled off the biggest upset of the dual with his 7-6 win over No. 7 Nick Lester. The lead seesawed back and forth, but Jantzen ultimately prevailed. The win brought Jantzen’s career record to 46-18.

Jantzen started off the bout with an early takedown just 50 seconds into the match, but Lester quickly evened the match by earning two points of his own. Lester gained his first lead, 5-4, in the second period, but Jantzen pulled out ahead once again with a takedown to go ahead, 6-5. Despite Lester tying the bout with his third escape, Jantzen won when he received an extra point for riding time to earn Harvard its first three points of the dual.

Peppelman brought the Crimson another three points with his 2-0 victory over No. 14 Matt Lester. Peppelman got out to an early lead with two points for a takedown in the first period, and the match remained scoreless in the following two periods.

Popple gave Harvard its final three points of the dual with a win over Marcus Armato. Armato started with an early 2-0 lead, but Popple turned things around and dominated the rest of the match, going on a 10-1 run to win by decision.

The Crimson’s only victory of the day came against Air Force (3-3, 0-1 WWC), with seven Harvard wrestlers winning their bouts. Last season, the Crimson also defeated the Falcons for one of its only two dual wins all season.

Jantzen lost for the first time this season against Cole VonOhlen, who defeated Janzten at 149 pounds in an 11-5 decision. The victory earned Air Force three points and gave the squad the lead for the first time since the opening bout at 125 lbs.

Peppelman picked up his second fall of the season, with a pin just 29 seconds into the match against Joshua Kreimier. Peppelman earned six points for the fall and sparked a five-match Crimson winning streak.

Sophomores Cameron Croy and Ian Roy and freshman Patrick Hogan also topped their Falcon counterparts. Croy and Roy each won their matches by decision, 11-8 and 5-4, respectively. Hogan won in a 6-4 decision, picking up an extra point for riding time.

Harvard held the lead three times during the matchup and grabbed a two-point advantage going into the heavyweight bout, but Applachian State (8-3, 2-0 Southern) won the final bout when it mattered most, with Joe Cummings earning a 7-3 decision over freshman David Ng for three points.

“I think we started off a little slow against Applachian State,” Keith said. “I think that’s a team we can beat. Everyone could have done a little bit more. Obviously, you can’t point to one person because it’s a team effort.”

Popple won his matchup at 174 lbs. by technical fall against Carter Downs. The freshman dominated the match and shut out his opponent 15-0 to gain five points for the Crimson.

Keith defeated Brett Boston at 133 lbs. in a 9-5 decision, and freshman James Fox produced Harvard’s last victory of the dual with a 9-1 major decision against Paul Weiss.