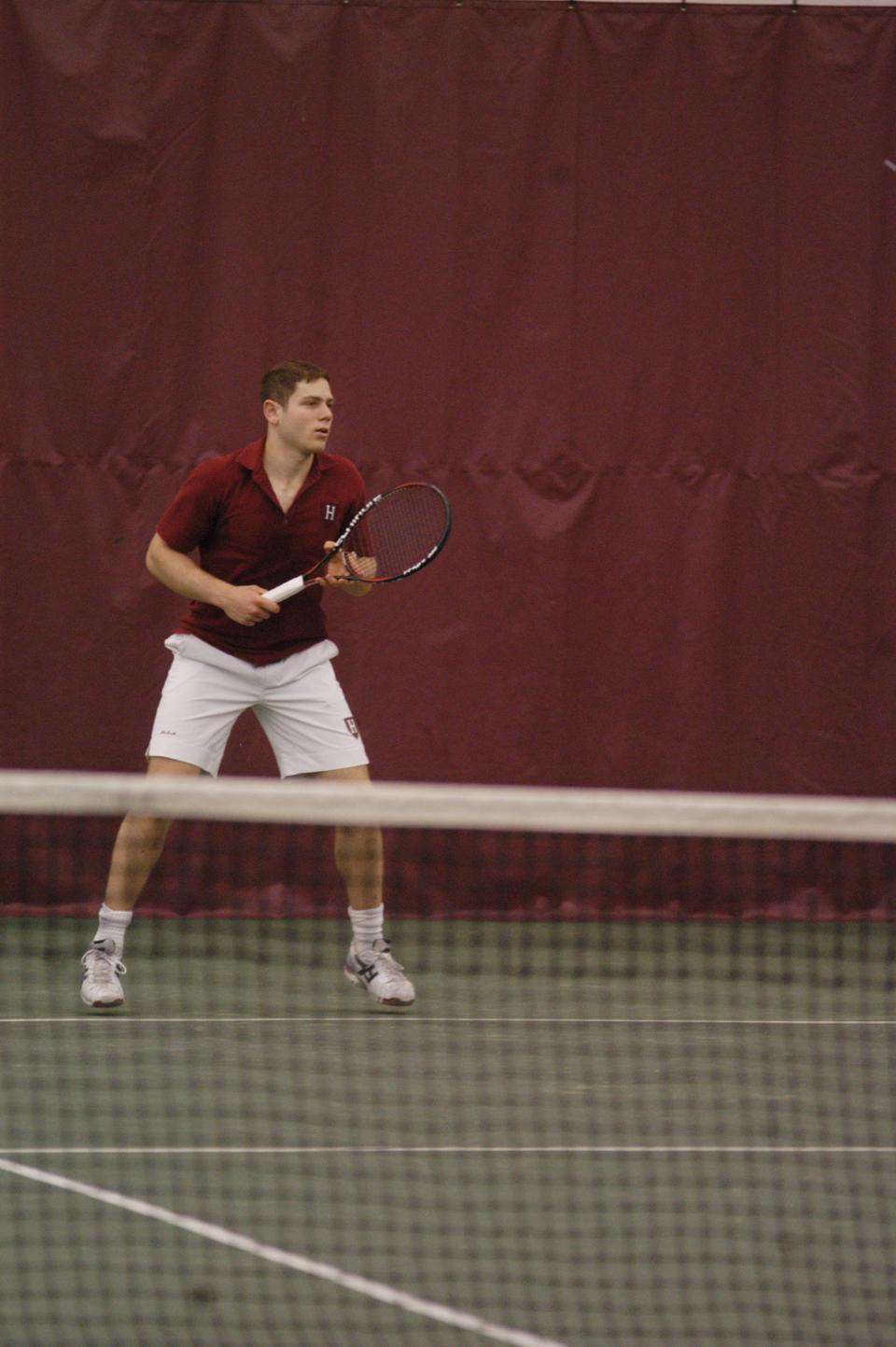 Senior Jonathan Pearlman, shown above in earlier action, and the Harvard men’s tennis team had a strong performance at the Harvard Winter Invite this past weekend, winning 22 of 26 matches in singles play and 10 of 12 matches in doubles play against Marist and Fordham.
By Steven T. A. Roach, Crimson Staff Writer

After two months without match play, the Harvard tennis team didn’t show any rust this weekend, putting on a nearly perfect display at the Harvard Winter Invite. The Crimson hosted Fordham and Marist from Friday through Sunday at the Murr Tennis Center, and Harvard won 22 out of 26 matches in singles play and 10 out of 12 doubles matches.

For the singles, freshman Henry Steer emerged as the tournament winner, going 3-0 on the weekend and dropping just six games in three matches. Fellow freshman Denis Nguyen earned a second-place finish in the tournament.

In doubles action, co-captain Alistair Felton and sophomore Casey MacMaster took first place, while the pairing of Andy and Denis Nguyen completed the clean sweep for Harvard with a second-place finish.

“It was a good way to start the season for sure,” said Harvard assistant coach Andrew Rueb ’95. “I think it’s all about building our skills as the season goes on, and we had a good start. The boys competed hard, and they’re getting a bit battle-tested for the next weekend.”

Steer led the charge with his first tournament win of the season. The rookie never looked to be in trouble throughout his three matches, finishing up with a perfect 3-0 weekend. In his first match, Steer steamrolled over Fordham’s Kuba Kowlaski, 6-1, 6-2, and followed up the next day with a victory (6-2, 6-1) against Marist’s Joseph Dube.

After two dominant performances, Steer capped off the weekend with a dominating win (6-0, 6-0) against Marist’s Joris Van Eck, losing the fewest games of any Crimson player during the weekend.

His second match was not as easy, but Denis Nguyen prevailed in three sets. Against Van Eck, Nguyen dropped the first set, 6-1, before rallying back to blank his opponent in the second set. The freshman completed his comeback victory by claiming the third set, 6-1.

The two other freshmen who competed, Alex Steinroeder and Shaun Chaudhuri, also posted winning records on the weekend. Steinroeder opened up play by defeating Matt Himmelsbach of Marist, 6-3, 6-4, and then won in a tight battle against Rossi, 7-5, 6-3. In his first loss of the weekend, Kowalski edged out Steinroeder in two tiebreak sets, dropping Steinroeder’s record to 2-1.

Chaudhuri only played two matches and claimed victories in both, besting Marist’s Dalen Klassen and Fordham’s Srikar Alla by the same scoreline of 6-2, 6-2.

In his first appearance of the season, sophomore Christo Schultz claimed two three-set victories. Schultz grabbed the opening set, 6-4, in his first matchup, but then dropped the middle set by the same score. Despite the two close sets, Schultz lost only one game in the third set en route to a 6-4, 4-6, 6-1 win. In his second match, Schultz dropped the first, 6-4, before coming back in the next two sets, 6-2, 6-2.

“It’s great to have Christo’s energy, his doubles’ skills, and singles’ game,” Rueb said. “He’s played a lot of good tennis, and it’s great to have him back with the rest of the team performing at a high level.”

Senior Jonathan Pearlman also went 3-0 for the weekend, dropping just one set in his three matches. He defeated Van Eck, 7-5, 6-3, in his first match, and then was tested further in a 6-2, 3-6, 7-5 victory over Kowalski. For his third match, he comfortably won the first set, 6-2, before Himmelsbach retired earlier.

In doubles action, Felton and MacMaster started off their championship run with an easy 8-1 win over the duo of Rossi and Himmelsbach. The Crimson pair then followed that up with an 8-4 win over Kowlaski and Alla. Nguyen and Nguyen, the runners-up of the tournament, mirrored the performance, starting out with an 8-1 victory over Marist’s Billy Bishop and Van Eck and then capping off the weekend with an 8-4 win over Rossi and Himmelsbach.

“We came back from break right away, started with a good scrimmage at Dartmouth, and then here, a lot of guys are playing well, so I’m excited for the season,” Steer said.

His second singles match went to three sets, but he only dropped seven games in his other two matches.

—Staff writer Steven T. A. Roach can be reached at sroach@college.harvard.edu.