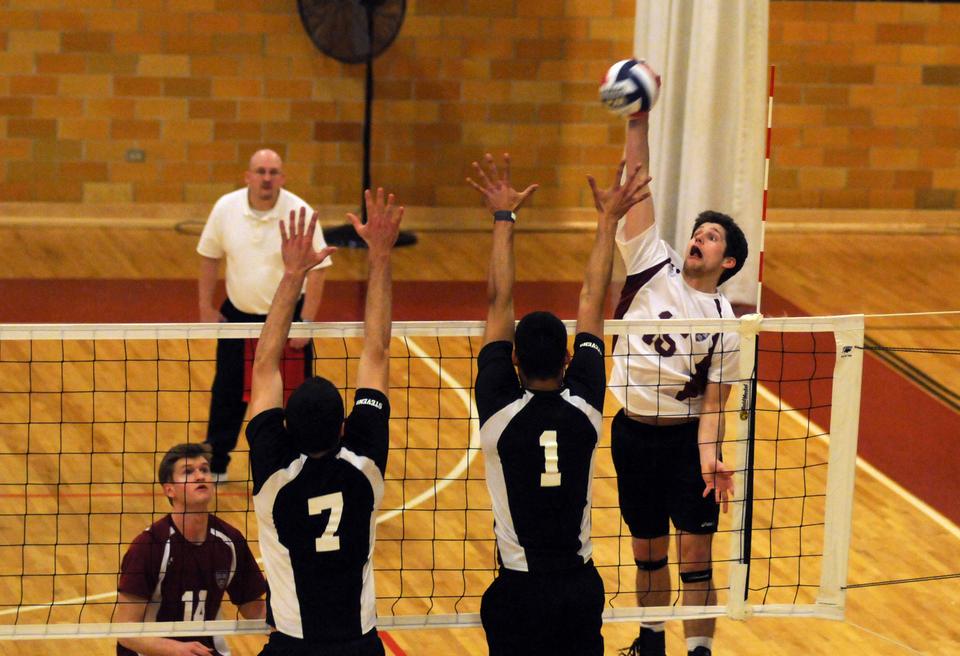 After dropping a tight third set in its season opener, the Harvard men’s volleyball team buckled down and defeated Endicott, 3-1, in Beverly, Mass., on Tuesday night.

During the hard-fought third set, the young Crimson (1-0) team struggled with its service game, which opened the door for the Gulls.

“We were up, but we missed a couple of serves here and there. They started to come back, and we let them get into it,” said freshman middle hitter Caleb Zimmick.

As Harvard refocused its serves, it overcame its third-set loss with a strong fourth game.

“We started going for the real tough serves right down the line,” said sophomore opposite hitter Nick Madden. “We put some pace behind them and got them in.”

The Crimson received standout performances in the season opener from freshmen Caleb Zimmick and DJ White. The two took control of the net with a combined 20 kills.

“Our freshmen definitely stepped up,” Madden said. “Caleb played well in the middle, and [co-captain] Matt [Jones] on the outside also played very well.”

Jones recorded a double-double for Harvard with 17 kills and 10 digs, helping carry the team to the 3-1 victory over the Gulls (0-1).

The match opened with a back-and-forth struggle, and Harvard grappled with Endicott’s offensive attack during the opening game.

“Endicott ran a pretty unpredictable offense,” Madden said. “They didn’t do a lot of the traditional hits. They ran a back three and some different unique approaches which took us a bit to adjust to.”

The teams alternated leads nine times in the first frame. With both squads tied at 17, Madden gave Harvard the 18-17 advantage with a timely kill. The visitors didn’t relinquish the lead from there, going on to win its first set of the season, 25-21.

In the following games, the Crimson found success in keeping the rallies short and preventing the Gulls from getting into a rhythm.

“On the points [when] we were able to get the rallies finished quickly, we had the best chance, since they are a team that really likes to extend rallies and make you make mistakes,” Jones said. “In game two, we did a good job of keeping the rallies short.”

With the game plan to shorten points, Harvard kept rolling in the second set, as it quickly built a 10-5 lead. White and Zimmick continued to dictate net play as they lead the team to a 25-17 win.

“Our freshman Caleb played great in the middle,” Jones said. “He dominated the net and hit at a really high percentage. He played very composed and really impressed me. I thought he was our MVP today.”

On the day, Zimmick committed only one error on 13 kills and recorded a team-high kill percentage of 75 percent.

During the entire match, the Crimson’s serve set the tone for its attack.

“I think the key to today’s match was serving,” Madden said. “When our serves were in, we took games easily, but as soon as we started missing serves, that’s when the game turned.”

As the third set rolled around, the Crimson’s serve began to falter. Despite opening up a six-point lead, Harvard left the door open just enough.

“We were up quite a bit, but we got a little tense, and we can’t play that way if we want to win,” Zimmick said.

With the help of Harvard’s service errors and strong performances from attackers Josh Anderson and Jeremy Siden, Endicott’s offense hit its stride. On the day, Anderson and Siden each recorded 11 kills.

The Crimson and Gulls traded points deep into the third before Endicott pulled away for a 30-28 victory.

In the fourth game, Harvard regained confidence in its serve, which sparked the offense.

Knotted at 9-9 in the final set, the Crimson offensive attack found its stride and put the pressure on Endicott’s defense.

“Our outer passing was good, and our offense really clicked,” Zimmick said. “The setters were able to find the open hitters, and we were quite balanced, which helped a lot.”