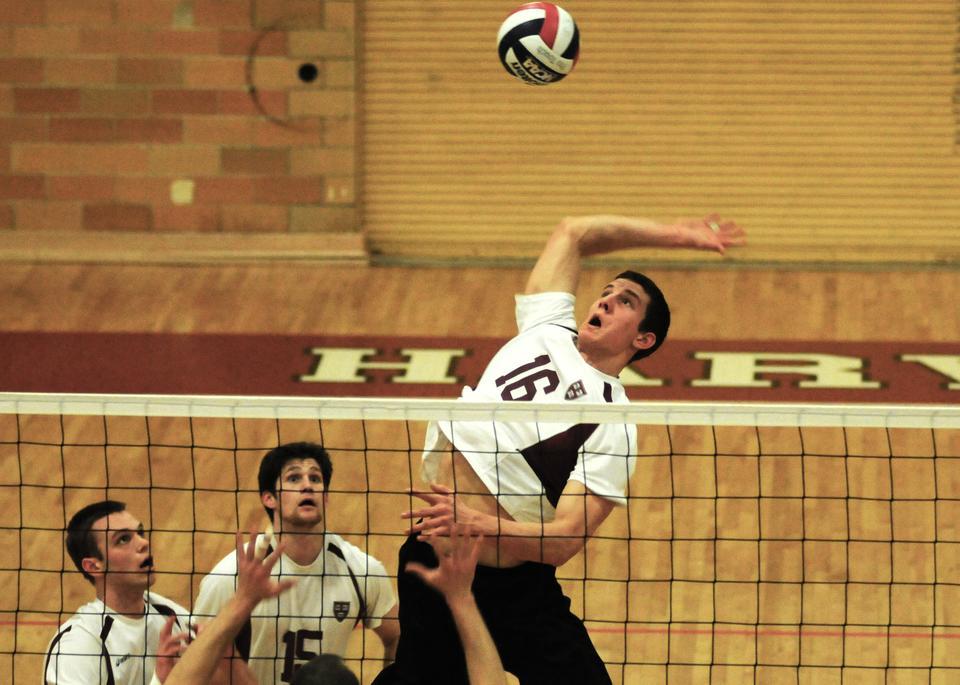 Shown here in an earlier contest, sophomore opposite hitter Nick Madden tallied a team-leading 12 kills and earned a hitting percentage of .526. Harvard rode strong performances from a host of underclassmen—as well as co-captain Matt Jones—to the 3-0 victory on Friday at Rivier.
By Marlee Melendy, Crimson Staff Writer

The last time the Harvard men’s volleyball team went up against Rivier, the Raiders battled the Crimson squad to a fourth game, nearly matching Harvard in both kills and hitting percentage, before falling, 3-1.

Not only did Harvard end the match with 40 kills—almost double the Raiders’ 25 kills—but the team also boasted a hitting percentage of .463 compared to Rivier’s .049.

“We played really well on Friday,” freshman Caleb Zimmick said. “We were really aggressive with our serving, which paid off a lot. It got the other team on the defensive, and we were really able to take advantage of that. We also passed very well which opened things up for the offense. ”

Sophomore Nick Madden recorded 12 kills and Jones had 11 of his own to lead the Crimson to the shutout victory. White and sophomore Michael Owen also put up solid showings, posting seven and six kills, respectively.

Harvard dominated the opening set, grabbing a convincing 25-13 to start the match.

But led by senior Tajh Stokes, who finished with 10 kills, and junior Steve Visentin, who tallied 24 assists, the Raiders rebounded in the second set, keeping it close until a late run gave the Crimson a 25-21 win.

Harvard closed out the match in the third, winning 3-1.

“Offensively, I really think we dominated this match, and ironed out some of the errors we were committing on Tuesday [against Endicott] to put together a more consistent attack,” junior Rob Lothman said.

On defense, Harvard was led by Gibbons, who posted seven digs, and Lothman, who finished with two digs and two blocked assists.

The freshmen also made their mark defensively, as Zimmick contributed one dig and two blocked assists, and White topped the Crimson squad with three blocked shots.

“Caleb and DJ have both been playing really well,” Jones said. “And DJ actually sparked a really big run for us on Friday by blocking a player on the other team two or three times in a row.…The freshmen work very hard, and it’s great to have them with the team.”

Though Harvard boasts a young squad featuring a combination of four freshmen sophomores in its starting lineup, the squad’s youth has not appeared to be a detriment early on, as the Crimson is off to a 3-0 start.

“The freshmen have done a phenomenal job so far,” Lothman said. “They’re both hitting for very high percentages and coming up with the right kills at the right time, while dealing with injuries at the same time. The sophomores, a year older and a year wiser, are also playing really well, especially considering that some of them are playing different positions from the ones that they played last year.”

“We’ve all been getting along really well,” Zimmick said. “I think everyone is fitting into their roles, and the captains are doing a great job of leading us and keeping us together as a unit.”

The win marks the Crimson’s second straight victory against Rivier and its second consecutive season with a pair of wins to open the year.

“I think it’s really important to start the season with a few wins,” Zimmick said. “We’ve established our confidence now and know that we’re a team that can compete with other teams.”