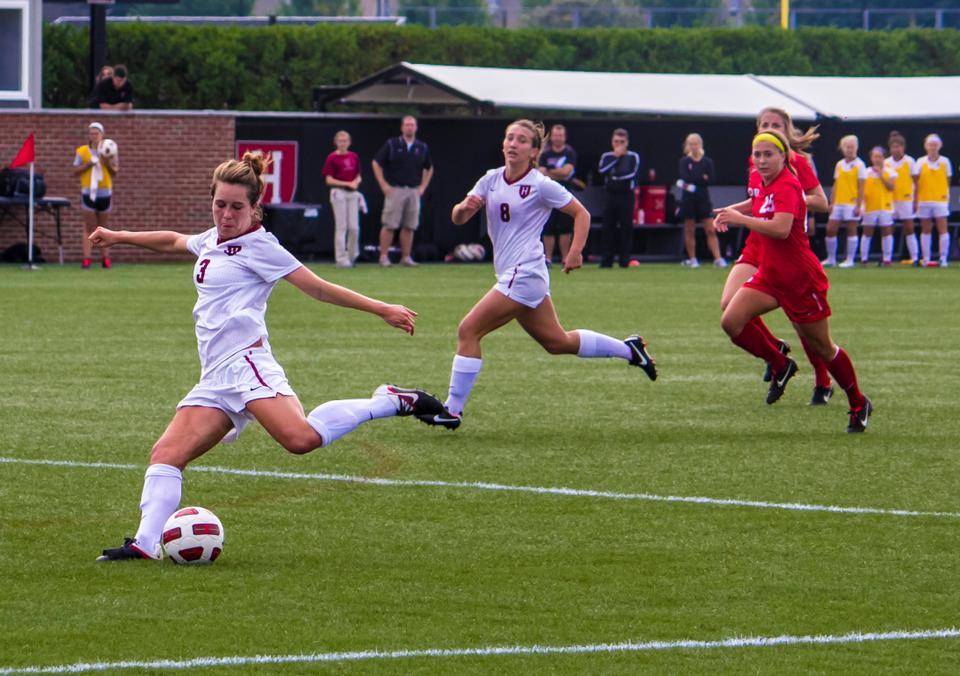 Sophomore Meg Casscells-Hamby and senior Taryn Kurcz lead Harvard in scoring and will work to help the team’s offense capitalize on a Brown defense that has struggled to stifle its opponents’ attack in Saturday’s game.
By Keith H. Bender, Crimson Staff Writer

When the Harvard women’s soccer team walks off Stevenson Field at Brown on Saturday evening, the team’s playoff picture will be clearer. The game will prove to be either a pivotal momentum boost or a late obstacle in the Crimson’s quest to remain in contention for the Ivy League title.

The match in Providence marks the midpoint of Ivy play, and for Harvard (5-3-3, 1-1-1 Ivy), this year’s contest with the Bears (6-5-0, 0-3-0) also marks a critical point in the season—just as it did last year, when a late score helped the Crimson to defeat Brown and remain atop the standings and undefeated against Ancient Eight teams.

But in 2012, the story has been different. With three games of conference play and only one win, Harvard has failed to maintain its dominance of Ancient Eight opponents and sits in fifth place, five points back in the standings behind first-place Princeton (7-3-1, 3-0-0) and Penn (7-4-1, 3-0-0).

With four remaining Ivy games in which to make up ground, the Crimson can reenter the title conversation by winning its next few matchups. To remain in legitimate contention of defending its 2011 Ivy title, Harvard must return to its championship form and begin its comeback with a defeat of last-place Brown.

The contest also has the potential to set the tone for the team’s growth this year, regardless of the ultimate Ivy championship outcome.

“This game is important for our confidence,” sophomore goalkeeper Bethany Kanten said. “It’s about growing and playing the style of soccer we want to play, not worrying about the result, and focusing on improving and developing.”

The Bears, meanwhile, share the cellar position in Ancient Eight standings with Yale (5-6-0, 0-3-0) and are still in search of their first conference win. After posting a 6-1 non-conference record in a strong start to the season, Brown has dropped four straight.

The Bears have struggled offensively, tallying only eleven goals in as many games, and are still looking to snap a scoreless streak that dates to Sept. 23. Sophomore forwards Chloe Cross and Mika Siegelman have netted nearly half of the team’s goals, and Siegelman has scored her three goals in a total of just nine shots.

Last year’s First-Team All-Ivy junior goalie MC Barrett and classmate Amber Bledsoe have split time in the net for Brown and together have posted an .850 save percentage and five shutouts during the 2012 campaign.

But the Bears still top the league in goals allowed and have consistently had difficulty keeping pressure away from its net. Brown was outshot 21-4 on Tuesday night in a 1-0 loss to Princeton.

The Crimson’s defense, led by Kanten, boasts the second-lowest number of goals allowed in the league. Kanten, who owns two shutouts on the year, has established herself in goal for Harvard this season and become a defensive force, in contrast to the uncertainty and injuries that plagued the position last season.

“Having a consistent goalkeeper like Beth is an asset that you can’t underestimate,” Johnson said.

For the Crimson’s offense, Johnson, sophomore midfielder Meg Casscells-Hamby, and senior defender Taryn Kurcz have led Harvard in points. Freshman forward Emily Mosbacher, who garnered Ivy League Rookie of the Week honors for her game-winning goal at New Hampshire on Oct. 2 and an assist in the tie against Cornell last Saturday, is quickly becoming one of the most productive offensive players on the Crimson roster.

“She has a great attitude about playing soccer, she works hard, and I think everyone saw that this week,” Kanten said of Mosbacher.

At the midpoint of conference play, the Bears’ chances of surging to the top of the standings may be slim, but the game against Harvard remains an important one. A win against the Crimson will bring Brown within two games of a tie for the all-time series, in which Harvard owns a 5-4-1 advantage during the past decade.

Yet a win for the Crimson would carry far more significance, providing the team with a jump up the ladder of the Ivy League standings, placing Harvard in contention for a repeat championship title once more.

But ultimately, the team is choosing to stay focused on the immediate challenge.

“I think we’re trying to take this game as Brown—just Brown,” Johnson said. “On Saturday, all that matters is Harvard versus Brown.”

—Staff writer Keith H. Bender can be reached at keithbender@college.harvard.edu.