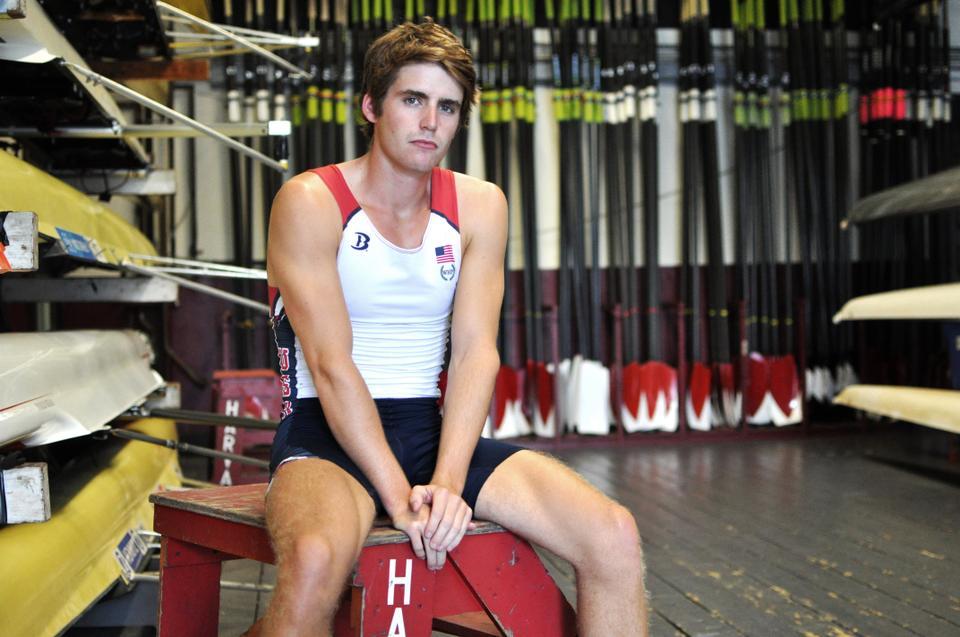 For lightweight rowers Andrew Campbell and Austin Meyer, the Head of the Charles Regatta will mark their first competition back in a Harvard boat after a year spent away from school vying for a spot in the 2012 London Olympics. Ultimately, neither rower reached the Games.

“This will be my first time on a large collegiate crew team in around 15 months,” Campbell remarks. “Life on a college crew team is much different than training on a small boat internationally. It makes practicing and training that much more fun.”

Last spring, Campbell and Meyer began their respective quests to make the U.S. Olympic Team as competitors rather than teammates. In April, both rowers competed in doubles at the Non-Qualified Olympic Small Boat Trials. Campbell and his partner Will Daly finished first—ahead of Meyer’s boat by about six seconds—and advanced to the Final Olympic Qualification Regatta in Lucerne, Switzerland.

But at that regatta, Campbell and Daly narrowly missed landing a spot on the team. They were edged out by about a second for one of the top two finishes, bringing their Olympic prospects to an end.

Campbell quickly got back to training to channel his frustration at the outcome in Lucerne.

“I sat idle for about two weeks after [the qualification regatta], but I grew restless and needed an outlet to make it feel better again,” Campbell says. “So, I got back in the single, which I really enjoyed. The single was my first true love in rowing.”

Campbell went on to compete at the Henley Royal Regatta in June, where he raced individually in the prestigious Diamond Challenge Sculls event. Campbell made it as far as the semifinals and then fell to South Africa’s Peter Lambert, who went on to secure the Henley title.

“Henley was an obvious choice because it was low pressure and really fun, but high competition,” Campbell says. “I had a great regatta, which boosted my confidence following the Olympic letdown.”

After Campbell’s strong showing at Henley, he decided to keep rowing the single and represent the U.S. in the 2012 Senior World Rowing Championships in Plovdiv, Bulgaria. He won a bronze medal in the event.

“I think having that opportunity to compete at the international level and represent the U.S. was a way to take away some of the sting of being so close to making the U.S. Olympic team,” says Linda Muri, who coaches the Crimson freshman lightweights as well as Campbell and Meyer individually.

After his own Olympic disappointment, Meyer took a different course. He paired up with fellow American rower Nick Trojan to race at the U-23 World Championships. In the final of the event, Meyer’s boat finished fourth with a time of 6:54.33, marking the best-ever finish for an American crew.

Although they were competitors this summer, Campbell and Meyer say the shared experience competing on the international level has brought them closer together. And now that they have both returned to race with Harvard this season, they will be rowing side by side in the first varsity boat.

“We both have the same goal,” Meyer says. “I think it’s awesome to have two young guys from Harvard finish one-two at Olympic trials. I think that’s really promising for the future…. We both have a lot of respect for each other.”

The Crimson lightweights’ success last season has also helped to ease the transition back to collegiate rowing for Campbell and Meyer.

“The team this year is phenomenal,” Meyer says. “Many of the guys are returning from winning National Championships. I’m coming back to a really experienced group of guys. I’m blending in pretty well.”

Now seasoned rowers on the international stage, Campbell and Meyer are looking forward to competing on the familiar Charles River.

“[Head of the Charles] is the biggest [two-day] regatta in the world,” Muri says. “Even though it’s in our backyard, it’s still a big deal.… People who have competed in the Olympics are always happy to come back to the Head of the Charles. I know Andrew and Austin are looking forward to it as well. Everyone wants to race.”

And for many of the rowers, the regatta is almost as much a social event as it is a competition.

“Head of the Charles is one of those events for me where I get to see so many people from around the world that I know through rowing,” Meyer says. “It’s an awesome atmosphere, and it’s our home course. We get pumped up the most for Head of the Charles.”

As Campbell and Meyer get re-acclimated both to collegiate rowing and life as Harvard students, the question still remains as to whether the rowers will contend for spots on the 2016 Olympic team. Both Campbell and Meyer acknowledged tentative plans to train but deemed it too soon to know definitively.

“I would be shocked if they didn’t,” Muri says. “They are both very competitive, driven young men with tremendous amounts of talent. I can see them going on for another four years. They were so close, this time who knows. They have every opportunity to represent the U.S. in Rio in 2016.”