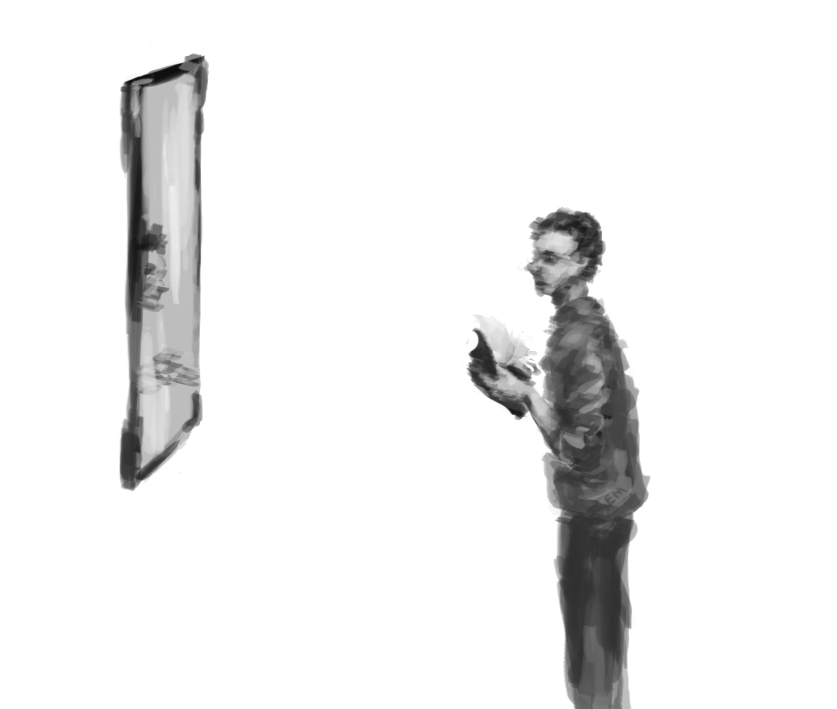 In novels like “Lolita” and “The Catcher in the Rye,” readers are asked to follow an unreliable protagonist in hopes of gaining a new perspective by the end of the journey. In Benjamin Stein’s novel “The Canvas,” translated from German by Brian Zumhagen, readers are met by not one, but two unreliable narrators—Amnon Zichroni and Jan Wechsler—each eager to take the story in their own direction. Stein’s meticulously crafted plotlines are so complete with details and recurring anxieties that by the end of both narrations, it is even difficult to separate the two narrators. Though each story starts in a different time and location, they end up irreversibly and eerily fused so that it is impossible to say which narrator is telling the truth. This indeterminate treatment of truth is one of the greatest strengths of the novel.

The physical layout of the book accomplishes as much for the novel as the intertwined plotlines. One story reads from the front to the back and the other story reads from back to front; readers are thus stuck flipping the novel over and back to keep up with both narrations. Just as the narrators choose how to tell their stories, readers are similarly free to choose the order and method by which to read them. “Behind each cover is a possible starting point for the action,” reads the disclaimer on both front and back covers. “Where you begin reading is up to you, or to chance.” The verdict of the innocence or guilt of each narrator is different depending on the order in which the stories are read. Only a confident and skillful writer like Stein would give such a dangerous privilege to his readers.

Both narrators focus their stories on the murky concept of memory, each determined to uncover the true past. “Each time we remember, we reshape, filter, separate and connect, add in, take out, and replace the original bit by bit over time through the memory of a memory,” says Amnon. “Who, then, can say what really happened?” Stein sketches a fuzzy reality in which mysticism and lies reside close to the actual the truth.

Amnon and Jan, both Jewish, travel through Switzerland, Germany, the United States, and Israel at different times, each wandering in search of an ultimately unattainable sense of belonging. While Jan’s narrative starts in the middle of his life when he is married with two children, Amnon’s narrative begins with his childhood. As Jan’s examination of his own life travels backward into personal memories he has forgotten or suppressed, Amnon’s narration travels forward as he encounters the memories of other characters. Stein backs up the struggles of both of his narrators with parts of Jewish text in a unique combination of religious and mystical anecdotes. This combination of modern and biblical comparisons creates points of convergence between the two stories. While maintaining distinct voices for each of his narrators, Stein draws the ideas and memories of each closer and closer until both minds arrive at a common character: Minsky, a man whose made-up memoir of his childhood in a concentration camp is ousted by Jan Wechsler.

The character of Minsky draws inspiration from Binjamin Wilkomirski, a man who published a fabricated memoir in 1997 about his supposed childhood as Holocaust survivor. Wilkomirski’s fraud was revealed by a Swiss journalist three years after his memoir was published. The same sort of controversy exists in “The Canvas,” though this time, Stein casts doubt on whether the Swiss journalist—in this novel, Jan Wechsler—was right in his claims of fraud.

The reader meets Minsky in both Jan’s and Amnon’s narrations, and he is portrayed as a victim of the media in both stories. “His life, as he described it to me on our way back from Poland, appeared to him like a canvas, like an oversized, forged painting,” says Amnon. “He was stripping away the colors in order to reveal the primer coat, the first five years of his life, that had been crudely painted over.” Either Minsky’s memories are incorrect, though they are real to him, or he is lying. This dichotomy exists almost ironically in Jan’s story as well. He too cannot remember the truth about his own childhood. “I am what I remember. I don’t have anything else,” Jan says. “If the documents now appear to prove that a large part of my memory is unreliable, then I myself am unreliable.”

At times, Stein’s portrayal of Jan’s unreliability is forced and readers are bogged down with reiterations of Jan’s confusion, as in the previous snippet from the novel. That aside, Stein molds each scene like a sculptor, and his tight, unexpected prose gives each story enough literary weight to stand on its own. Though the intriguing merit of this novel arises mainly out of Stein’s decision to tell the story from two perspectives, this is not to say that the mode of storytelling is this novel’s only aspect worthy of praise. If one were to read each narration as a separate entity, both would prove to be intriguing and expertly woven. When the reader finally surfaces from the turbulent waters of fabricated memory, it is not clear whose perspective is less obscured by inconsistencies. Yet because Stein paints parallels through each story, there remains an overall understanding and sense of cohesion that is sewn through the fabric of “The Canvas.”

—Staff writer Virginia R. Marshall can be reached at virginiarosemarshall@college.harvard.ed