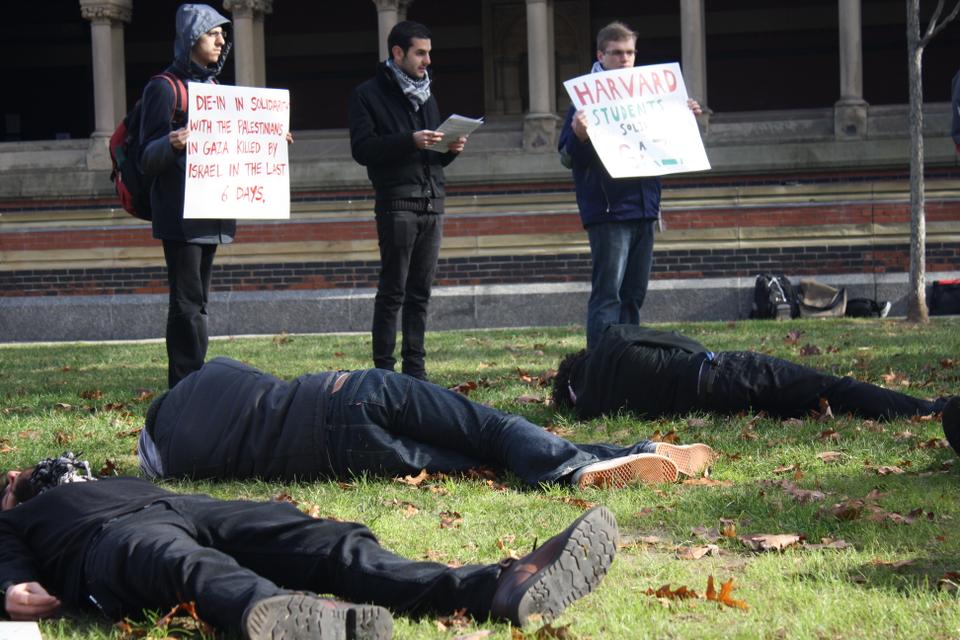 In response to the most recent escalation of violence in the Gaza Strip, members of the Harvard College Palestine Solidarity Committee staged a “die-in” outside of Annenberg on Tuesday.

As one member chanted over 100 names and ages—those of Palestinians who had been killed in Israeli assaults since last Thursday—protesters laid down on the grass to demonstrate solidarity for Gaza.

The ages of the victims were read to emphasize the brutal nature of the conflict, according to Lena K. Awwad ’13, co-chair of the PSC.

“For me personally, the event is not about militants versus an army, it’s more about the children in Gaza,” Awwad said. “If you notice from the reading of the list, a lot of them are below the age of 15 years old who’ve been killed.”

One student held up a poster that quoted a three-year-old Palestinian named Abdullah. It read, “When the missile comes to our house, I hope my strong and big parents will hit it and push it away.”

While the die-in occurred, other PSC members handed out fliers about the recent events to passersby and invited them to pose with a whiteboard that read, 'I stand in solidarity with Gaza because...’ and to fill phrases such as 'students in Gaza,' 'families in Gaza,' 'women in Gaza,' or 'men in Gaza.'

The pictures will be part of a series posted on the PSC’s Facebook page, according to Awwad.

“It’s just a series of statements to express why we’re in solidarity and the fact that this war is about families. It’s about schoolchildren. It’s about innocent civilians who are being targeted every day,” Awwad said.

The protest at Harvard is one of many in the Boston area since the attacks on the Gaza Strip began, according to Alex R. Shams, a PSC member and student at the Graduate School of Arts and Sciences,

Protests have occurred in Copley Square, Boston University, and the Boston Common.

The protests have not been coordinated together, according to Shams. "They’ve been spontaneous mobilizations at different campuses and in different areas,” he said.

Although the protest at Harvard only reached those passing by Annenberg around lunchtime, the organizers are hopeful that the event will lead to greater awareness around the world, Awwad said.

“Harvard is ... such a well-known place that we’re trying to make it clear that even here, in the seat of American power, in the heart of America, there are people that disagree with Israeli policies and American policies aiding Israel,” Shams said.