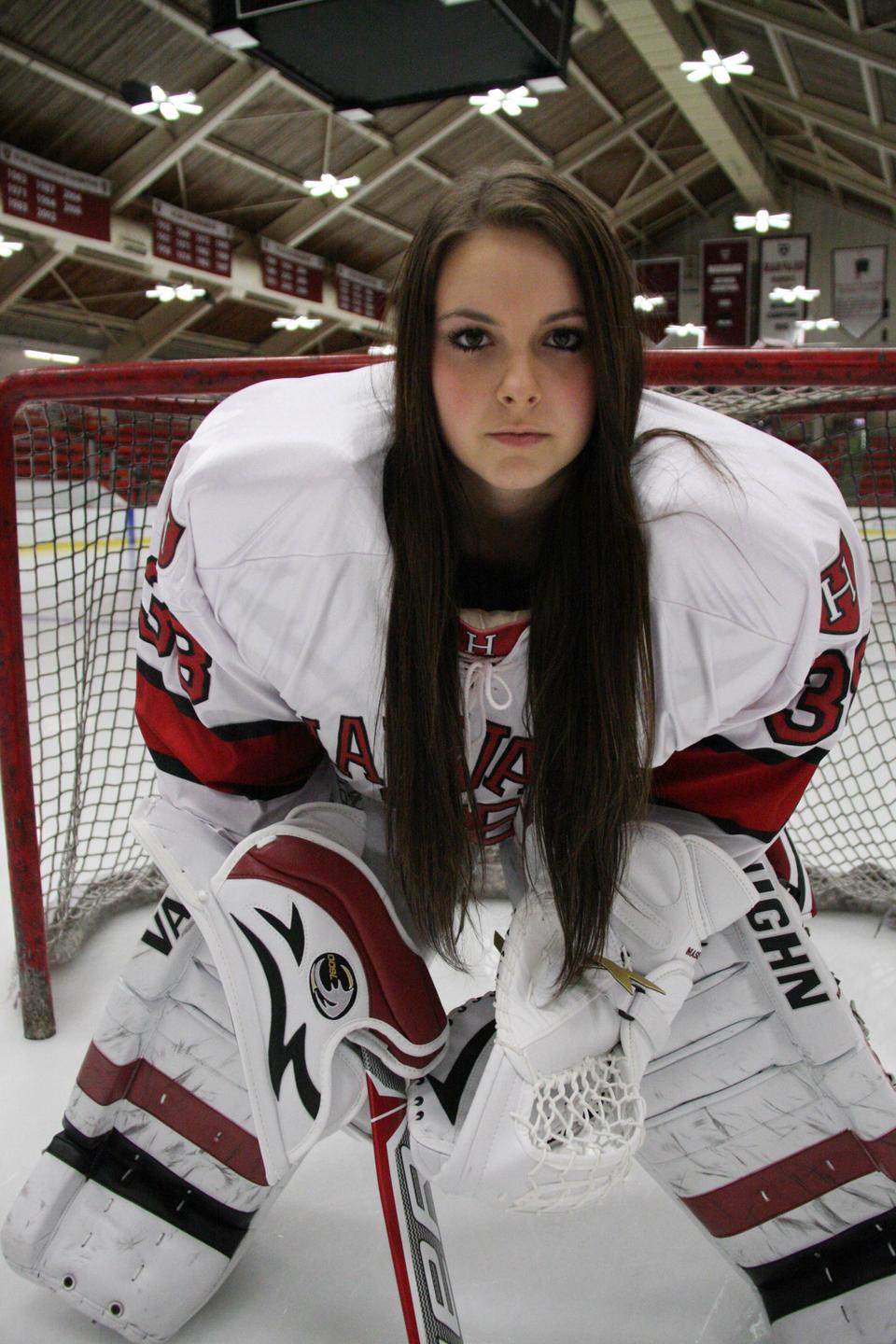 The Harvard women’s ice hockey team, ranked No.6 in the country, is not simply winning—it is dominating. Both games this past weekend ended in shutouts after Brown and Yale failed to get the puck past co-captain goalie Laura Bellamy and freshman goalie Emerance Maschmeyer, respectively.

The two victories extended the Crimson’s winning streak to four games to begin the season. Harvard has won its first four consecutive games only four times in program history, with the last time occurring in the 2007-2008 season. The Crimson’s defense has only allowed one goal so far this season, a large testament to the skill of the team’s goaltenders.

“Both [Bellamy and Maschmeyer] have been incredible for us between the pipes so far,” co-captain forward Jillian Dempsey said. “There is a certain confidence playing up front knowing that one of them is in goal because not only are they very skilled and reliable, but they work extremely hard to improve on their game, always sticking around for extra shots or working with me one versus one on breakaway moves or tough shots to save, helping me get better on my game.”

“We spent so much time down [on the offensive end],” Bellamy said. “When it does come down to our end, our defense is doing a great job of keeping the shots minimal and clearing, so our job [as goalies] has been pretty easy so far.”

“It’s a great honor,” Bellamy said. “There are a lot of great goalies to go through this program, and I played with one of them three years ago, Kristi Kessler. She’s been a huge role model for me. Ali Boe is also one of the best goalies in this program, and to be in the same breath as those guys is really an honor.”

Bellamy has not allowed any goals against in her two starts this season.

“Our defense has been playing really well, and our offense, too,” Bellamy said. “A big reason we’ve only given up one goal is because of how the team is playing, so we are just hoping to keep it up.”

Prior to this weekend, Bellamy registered another shutout with 30 saves against Quinnipiac, putting her total number of saves for the season at 35. Last season the co-captain registered 679 saves over the span of 32 Harvard matches.

“We do a little handshake before every opening face-off, which really gets us fired up,” Dempsey said. “And we have little pre-game sayings that we toss around, like, ‘Here’s to being the hunter,’—one of our mindsets for the season. Being co-captain with her is perfect because I think we complement each other well in terms of our leadership. It is always so easy to talk about anything with her, and she communicates well with both the coaches and players.”

Maschmeyer also had a strong finish this past weekend against Yale. The freshman goalie blocked all 12 Bulldog shots, ultimately ending the game with a 4-0 shutout win.

“Emerance is a great goalie,” Bellamy said. “She’s coming from Team Canada, and she’s done a great job with them. I love having that competition in practice every day. She’s a competitor. We both want to be in the net, so right now we’re doing a great job of playing off of each other. It’s been great. I really like playing with her.”

The freshman is off to an impressive start to her Crimson career. Now with a personal 2-0 record, Maschmeyer has a 0.50 goals against average, only allowing one goal so far this season.

Earlier in the season, Maschmeyer experienced her first Harvard win in goal in a 9-1 bout against Princeton. Maschmeyer is the first Crimson goalie in all-time history to win her first start.

“All of us freshmen have a lot of good upperclassmen to look up to, and they help us out a lot,” Maschmeyer said. “Just having a really good team helps a lot with the transition. For me especially, I played away from home last year, so coming here and playing away from home wasn’t a big difference, which helps a lot.”

All four of Harvard’s wins have been on the road this season, a feat only accomplished once before in program history. The Crimson will not see a home game until Thanksgiving weekend when the team matches up against Colgate and Cornell.

“It’s been great to have such a great start, and to have it come on the road has been a lot about how we’re coming together as a team right off the bat,” Bellamy said. “But it’s going to be nice being at home and being a little more comfortable in our zone.”

No. 6 Harvard is looking to extend its 4-0 record, and Bellamy and Maschmeyer are planning on making Crimson shutouts a regular occurrence this season.