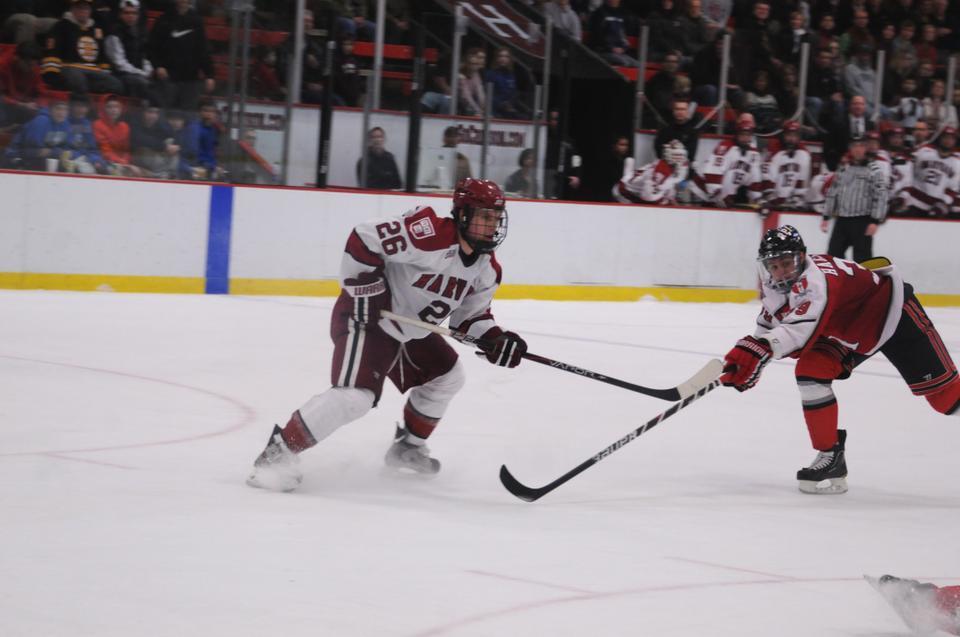 Junior forward Luke Grenier gave the Crimson its first lead of the night with his seventh goal of the year, a crucial third-period score from the slot. But visiting Rensselaer struck back, scoring with just 63 seconds left to force the 2-2 tie, Harvard’s tenth of the season.
By Robert S Samuels, Crimson Staff Writer

The Harvard men’s hockey team seemed to have found its groove.

After a first half of the season characterized by a program-record number of ties, the Crimson held a 2-1 lead going in to the game’s final minute against Rensselaer. And though it was far from the team’s best performance, Harvard was on the verge of winning its third league game in four tries.

But the visiting Engineers played spoilers, scoring what would be the game’s last goal with 63 seconds left on the clock to force the 2-2 overtime tie Friday night at the Bright Hockey Center.

“We got pretty much what we deserved,” Harvard coach Ted Donato ’91 said. “With a little over a minute left, we had the puck and full control. We end up icing the puck, and [it’s] just indicative of what we saw all night. Not a lot of poise with the puck and not great execution.”

By earning only one point on the night, Harvard fell to fourth place in the ECAC standings, now one point ahead of fifth-place Clarkson.  Because only the top four teams in the conference earn a bye in the first round of next month’s ECAC playoffs, a failure to pick up two points against Rensselaer (7-19-3, 4-10-3), the league’s lowest-ranked team, may prove to be an important misstep for the Crimson.

“I know they’re lowest ranked right now...but they really brought the fight,” sophomore goaltender Raphael Girard said. “They’re not a really skilled team—there’s one, two guys who can shoot the puck on their team—but they really worked hard, and that paid off for them in the end.”

Junior forwards Alex Fallstrom and Luke Grenier, whose score midway through the third period gave Harvard the lead, each scored once on the night.

Unlike in games past, Girard started for the Crimson in net, saving 27 of the 29 shots that came his way. For most of the season, Girard had watched the action from the bench while freshman Steve Michalek tended the Crimson’s net. But the rookie had been pulled in favor of Girard in both of the two previous contests, and so on Friday, it was Girard who got the start.

“[Girard] has played well in his two relief appearances,” Donato said. “Raph’s worked hard, he earned the start tonight, and I thought he played well.”

Harvard looked poised to grab the lead early, as the team had two legitimate goal chances in the first two minutes while Rensselaer managed just one shot in the opening six minutes. The Engineers offense began to heat up later in the period, tallying four shots in the ensuing 2:35 and eventually scoring the game’s first goal.

Rensselaer defenseman Nick Bailen fired a shot from the right point, which Crimson freshman defenseman Max Everson blocked. But two Engineers forwards pushed the puck over to teammate C.J. Lee, who beat Girard glove side to give the visitors the 1-0 lead.

It didn’t take the long for the Harvard offense, which had been largely stagnant since the early goings, to answer.

Less than two minutes later, junior forward Marshall Everson found Fallstrom just outside the crease. Fallstrom knocked it past Rensselaer goaltender Bryce Merriam to even the score at one.

“It was kind of a broken play,” Fallstrom said. “Max [Everson] shot [the puck], and it went down into the corner, and Marshall made a really nice [pass]…. It was just hanging out there in front of net, and all I had to do was put it in.”

Neither squad could break the draw during the second period, though Rensselaer nearly grabbed the lead on a number of occasions. Twice, Girard was sorely out of position, giving the Engineers a large area of goal to work with. But both times, the visitors could not capitalize, and the score remained tied going into the game’s final frame.

Ten minutes into the third period, Harvard, whose third-period theatrics have lifted the team a number of times this season, came through again.  In a two-on-one, senior forward Eric Kroshus skated down the left side of the ice before finding Grenier in the slot, and the junior drilled his seventh of the year to give the home team the 2-1 edge.

The Crimson failed to execute on a power-play opportunity later in the period and widen the lead. Harvard went zero for two on the man advantage for the night.

That missed opportunity came back to bite the home team. With just over a minute remaining, Engineers forward Brock Higgs sent the game into overtime with his equalizer.

“I’m kind of pissed because I wish I could have closed that game [and] just [brought] that win home,” Girard said.

Neither team could break the tie in the five-minute overtime period.