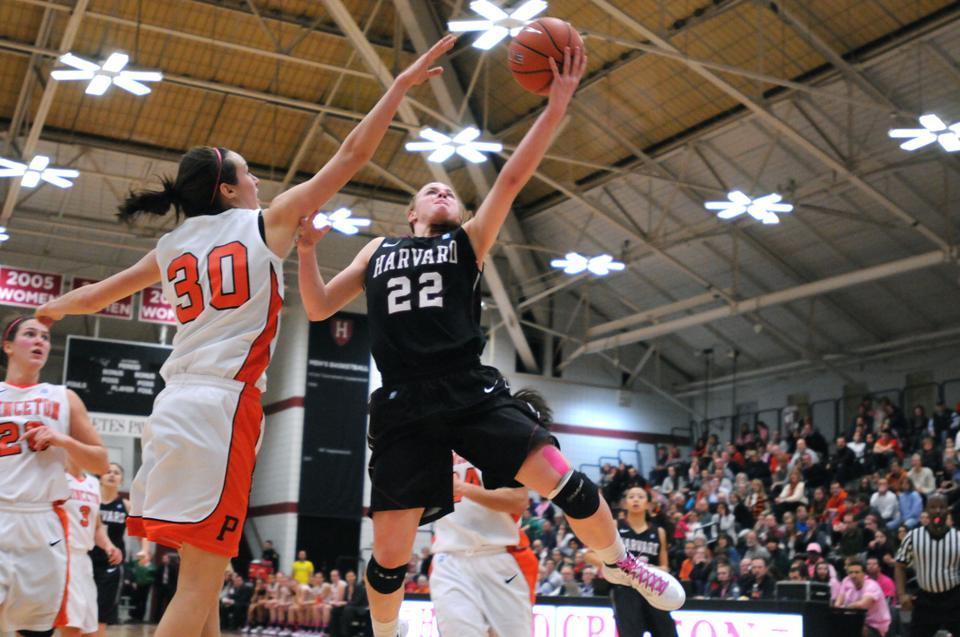 Sophomore guard Christine Clark drives to the basket against the stingy Princeton defense in the Saturday night contest at Lavietes Pavilion. Clark struggled against the Tigers, making only five of her 19 field goal attempts, but still managed 17 points in the Crimson’s 85-56 loss.
By Jacob D. H. Feldman, Crimson Staff Writer

Princeton dominated the Harvard women’s basketball team Saturday night, as the No. 1 team in the Ivy League went up by as many as 40 points and left Lavietes Pavilion with an 84-56 win.

“We had nine or 10 shots that went around the rim and out,” Crimson coach Kathy Delaney-Smith said. “What happens when you start missing those…is you hang your head a little, you stop hitting the boards, you don’t cover breakaways, [and] they start making spin-around layups. We react to our offense, and that’s a weakness for us. It’s why we are not a good defensive team.”

The second half was no better for Harvard. Coming out of the locker room, the team gave up a 13-4 run that ended with Princeton up 28 and the game all but out of reach. From there, the score only got uglier. The Crimson’s offensive pestilence continued as the Tigers blew the game even more wide open. At one point, the visitors boasted a 41-point, 80-39 lead.

“We didn’t have the team focus that we needed,” co-captain Brogan Berry said. “We had a lot of individual effort, but it just wasn’t collective as a team. You have to be able to feed off of each other, and we didn’t do that.”

Continuing the battle, sophomore Christine Clark repeatedly drove to the basket, scoring several times and drawing fouls on other occasions late in the game. She finished with 13 second-half points before the buzzer brought an end to the 84-56 onslaught.

“She’ll never stop trying,” said Delaney-Smith of Clark who finished with 17 points but made only five of her 19 shots from the field and one of five from deep. “She’s an incredible player. I’m sorry she had some bad shooting nights this weekend. It’s out of character for her.”

Rasheed delivered a number of eye-catching plays on fast breaks that thrilled her team and the large contingent of Princeton supporters in the stands.

“[Our strategy was] just to play defense on her,” Delaney-Smith said. “We didn’t. We were soft. We couldn’t have more errors defensively. We just have to play her tougher. I don’t feel we played her smart individually or as a team. And then she started feeling good. That’s exactly what we try to stop.”

A day after battling Penn in a win, Harvard’s poor shooting night and weak defense could be attributed to tired legs. Five Crimson players logged over 25 minutes in Friday’s contest, while the Tigers rested their starters during a drubbing of Dartmouth. Yet Berry didn’t think the Crimson’s struggles could be attributed fatigue.

“I didn’t think it showed how tired we were physically,” Berry said. “It was more our mental focus. Our focus wasn’t there [Saturday].”

Harvard is now 1-4 against Princeton in its last five matchups. In one of the biggest games of the year, Delaney-Smith was disappointed by the how the team failed to show up.

“Who knows why you don’t show up for such an important game,” she said. “I’m kind of shocked.”

“The sad thing is we had worked so hard preparing for them all week,” Berry said. “I feel like we knew them inside and out, and I feel like we just couldn’t take what we had and execute on the floor.”