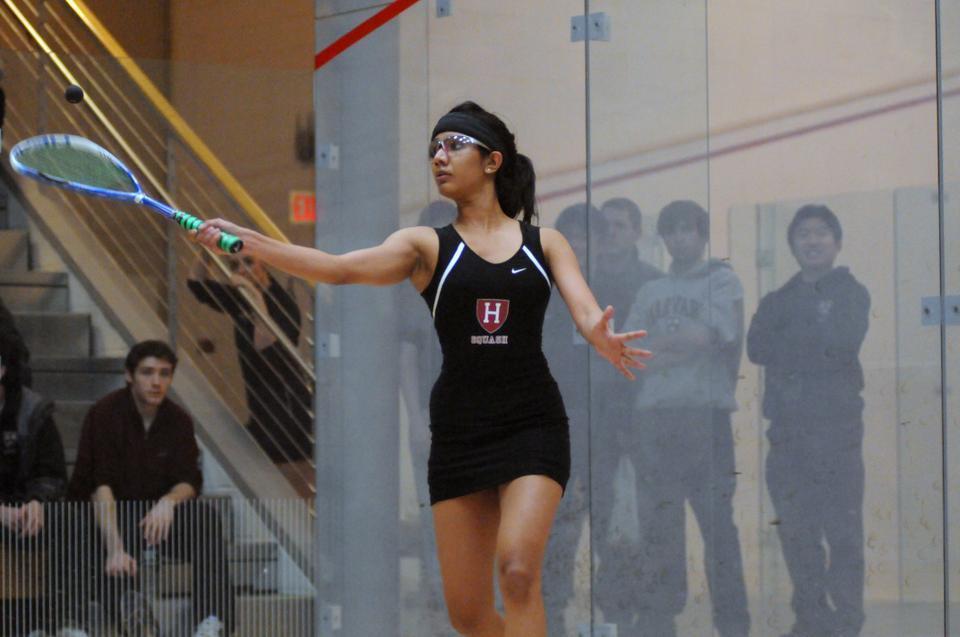 In her final regular season match, Harvard co-captain Nirasha Guruge, shown above in earlier action, defeated Yale co-captain Rhetta Nadas in four games, battling back from an early one-game deficit to grab the win. Guruge was one of five Crimson players to grab victories on Sunday.
By Peter G. Cornick, Crimson Staff Writer

With the Ivy League title resting on the final matchup of the day, the Harvard women’s squash team found itself in familiar territory with its oldest foe.

In the squads’ first official meeting since the Bulldogs took the CSA Team Championships last February, Harvard fought back from a 4-2 deficit to tie the match at four games apiece.

“It came down to guts today,” co-captain Cece Cortes said. “Our girls dug in and showed a lot of heart, and we really won by the skin of our teeth, to be honest.”

Cortes’ co-captain Nirasha Guruge earned the Crimson its first win, as the senior won the last regular season match of her career against Yale co-captain Rhetta Nadas. After dropping the first game, 11-7, Guruge recovered with two convincing victories. And though Nadas made the fourth game close, Guruge closed out the win with a 13-11 victory.

Cortes followed suit with a 3-2 win over sophomore Gwen Tilghman. The pair traded games, but Harvard’s captain surged ahead in the fifth game, as her 11-5 victory handed the Crimson its second win. But the co-captains’ successes were sandwiched by two losses from Harvard freshmen, as Megan Murray and Julianne Chu dropped their first matches of the season.

Gemmell’s only previous loss was at the hands of Yale No. 1 Millie Tomlinson in last year’s individual national championship final. But playing in the No. 2 slot Sunday, Gemmell fell in a five-game loss that gave the Bulldogs the lead.

When another loss meant the Ivy crown would reside in New Haven for the second straight year, the Crimson’s title chances rested in the hands of freshmen No. 1 Amanda Sobhy, No. 4 Mendez, and junior No. 7 Sarah Mumanachit.

Mumanachit knew from past experience the pressure of decisive matches.

“Last year, when we played Yale for the Ivy title, I was the last match on court at 4-4,” Mumanachit said. “It brought back memories, so it was tough.”

Sobhy cruised to victory against defending individual national champion Tomlinson, downing the sophomore in three sets and demonstrating why she was recently ranked as the seventh best under-23 player in the world.

“We think of [Sobhy] as our own Jeremy Lin,” Cortes said of the freshman sensation.

The result left Mumanachit and Mendez fighting for the title as the only players left on court.

Mumanachit dropped her first game to freshman Shihui Mao, 11-5, before taking the next two. Mao responded with an 11-6 win in the fourth, leading to a critical fifth game.

With Mendez firmly in control of her match against van Arkel, all eyes—and in some cases ears—were focused on Mumanachit and Mao.

“I was probably more nervous listening to the crowd during Sarah’s match than I was about my own match,” Mendez said.

Cortes echoed the sentiment, as she believes Mumanachit played the make-or-break match.

“[Mumanachit] showed tremendous mental strength and fortitude, but also adaptability,” the co-captain said. “She played long rallies but also attacked more, which is a new dynamic that she has added to her game that made the difference…. That was the match of the day.”

And Mumanachit showed that offensive strength as she powered to an 11-3 win to take the matchup.

With the score tied at 4-4, Mendez was halfway through her strong performance against van Arkel when the freshman dropped  her opponent, 3-0.

With its Ivy title, Harvard sits in pole position going into the CSA Team Championships, which will be held Feb. 24 at the Murr Center. But Cortes said she knows that now is not the time for her team to become complacent.

“We’re glad that we won today, but we have a lot of work to do over the next few weeks before Nationals,” the senior said. “We’re going to take this win and set it aside…and take nothing for granted. Some of the women we played today are going to be training hard, and they may come back and play better squash. So our level is going to have to come up if we want to maintain our seeded position.”