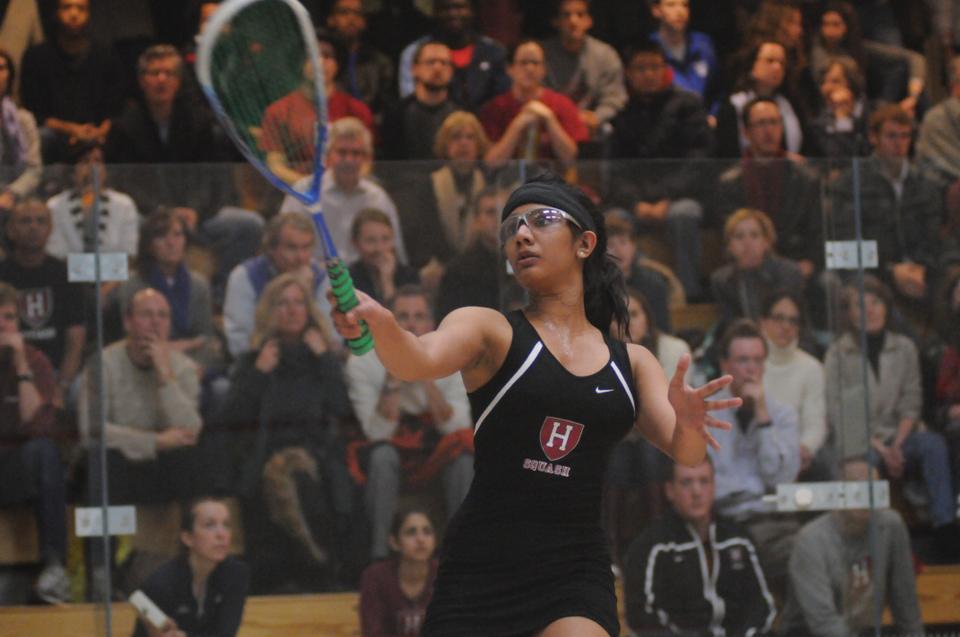 Two weeks ago, the Harvard women’s squash team got the win that eluded it all last season. This weekend, the Crimson is coming back for more.

Off of the heels of clinching the Ivy League title against Yale two weekends ago in New Haven, the eyes of the collegiate squash world now shift to Cambridge, as No. 1 Harvard will play host this weekend for the CSA Team Championships at the Murr Center.

The undefeated Crimson (14-0, 7-0 Ivy) looks to grab its second national title in three years. Last season, the Bulldogs dropped Harvard in both the CSA championship finals and the Ivy League title decider, 5-4.

But with its come-from-behind victory in New Haven giving Yale its first loss in nearly two years, the Crimson now sits in pole position to bring the Howe Cup back to Cambridge.

And after having two weeks of practice to focus on the challenge ahead, co-captain Cece Cortes believes her team is hitting its stride at the perfect time.

“We’ve been working really hard and getting in double sessions,” Cortes said. “We have been working on our match play and our mental tactics, and I think we are an even better team than we were two weeks ago.”

While the wounds of last year’s defeats at the hands of the Bulldogs may be on many people’s minds, Cortes insists the team has all of its attention on the weekend it has ahead.

But Yale is not the only squad on Harvard’s radar. In addition to battling back from a 4-2 deficit against the Bulldogs, the Crimson found itself down 4-1 to Princeton before winning all remaining matches for the 5-4 victory, in a win that Harvard coach Mike Way has previously said “scared the crap out of [the team].”

To carry the team through the weekend, the Crimson will look to freshman Amanda Sobhy. Sobhy, currently ranked 28th by the Women’s International Squash Player’s Association, has man-handled the competition, sweeping all of her opponent this year at the No. 1 position, including the reigning individual national champion, Bulldog sophomore Millie Tomlinson, 11-6, 11-3, 11-5. In those sweeps, no opponent has scored more than seven points on her in any one game.

Sobhy headlines a strong freshman class, one that boast four members in the top nine and has produced strong results so far this season. Rookies Julianne Chu and Megan Murray come into the weekend with only one collegiate loss to their names, and Haley Mendez, playing at the No. 4 spot, claimed both tie-breaking games against Yale and the Tigers to give her team the victories.

It will be an interesting experience for Harvard’s rookies, as hosting a major national tournament is something they are not accustomed to.

“We don’t really know what to expect [as a class],” Mendez said. “I certainly didn’t realize the magnitude of the event–I think 40 or so teams are coming. But we are all very excited to have it at home and have a bunch of our friends come support.”

Cortes is also relishing the opportunity to play where the Crimson feels most at home.

“We know the courts in and out,” Cortes said. “We’re used to the temperature, in terms of the warmth of the ball and the bounce on the court. We have that down and we usually do pretty well on our home courts.”

What Harvard has in young talent it matches with veteran leadership. Junior No. 7 Sarah Mumanachit, whose match-tying victory against the Bulldogs in New Haven turned the tide in the Crimson’s favor, joins Sobhy as Harvard’s only other undefeated player.

Classmate Laura Gemmell, the 2010 individual national champion, and co-captain Nirasha Guruge will take their spots behind Sobhy in the No. 2 and 3 spots, respectively, while junior No. 5 Natasha Kingshott is coming off a strong 9-2 season.

Harvard comes in as the favorite, but Cortes knows her team is going to have to battle.

“Grit is what has kept us on top when we were down against Princeton and Yale,” the senior said. “If we continue to have grit and resilience and determination to fight for every ball and point and to push our bodies to the limit, I think we should be in good shape.”