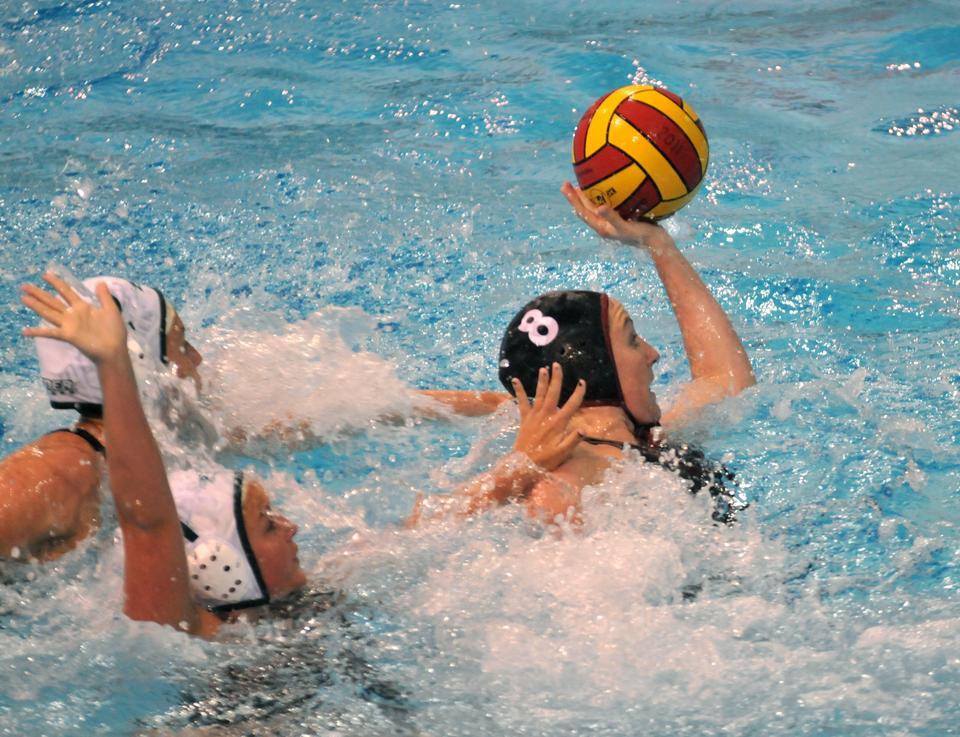 Co-captain Devan Kennifer, shown above in earlier action, turned in two strong offensive performance for the Harvard women’s water polo team, notching seven goals in the Crimson’s 15-14 loss to Iona and two in Harvard’s 13-1 win over Villanova, both on Saturday.
By Patrick Galvin, Crimson Staff Writer

Harvard women’s water polo kicked off the regular season on Saturday, splitting its two games for the day against Villanova and host, Iona.

The Crimson ran the gamut of game experiences, losing a close 15-14 match to Iona Saturday morning before dominating Villanova that afternoon at the Iona Invitational in New Rochelle, N.Y.

Iona’s pool, the Hynes Center Pool, is shallow-deep and not regulation length, which created some problems for Harvard. Although the Crimson found itself out of its element, junior attacker Aisha Price said the pool forced the team to adjust.

“We’re a fast team, so, since it was a shorter pool, we weren’t able to capitalize on our speed; we couldn’t capitalize on counter attacks,” Price said. “We tried to make the best out of the situation with the pool, but going into the future, we need to know how to capitalize on all parts of our game.”

Harvard finished off its opening day of the season by trouncing Villanova, who struggled to keep up with Harvard’s depth.

The Crimson effectively ended the game in the first quarter by climbing up to a 9-0 lead.

“We wanted to end on a good note in the day of games,” said Price, who led the charge against the Wildcats with three goals in the game. “We knew we had to come out strong and put the game away early in that first quarter.”

“We ran a pretty smooth rotation,” Price said. “Everyone was getting minutes, and everyone was in the water.”

Frager’s two goals were only part of the freshman class’ large contribution this weekend. Goalie Ariel Dukes started against Iona, while Jasmine Griffin started against Villanova, and the rookies made seven and nine saves, respectively.

Frager and classmate Kalina Grabb led the team in steals against Villanova with four apiece.

Despite coming in as the favorite, the Crimson couldn’t complete a come-from-behind victory as a 6-2 run in the fourth failed to put the squad over the edge to defeat the Gaels.

The game began with both Iona and Harvard trading possessions and goals in the first quarter.

Although the Gaels finished the first quarter with just a one-goal advantage, momentum stayed on their side through the proceeding two quarters, and the team ran up the score to 13-8.

“[Their offense] was an aggressive style of play,” said Dukes, who made her collegiate debut in the contest. “They knew what they were doing, jumping off the bottom of the pool, and they were taking a lot of shots.”

By the fourth quarter, Harvard was better accustomed to the shallow-deep setup, which took away from the large home-pool advantage the Gaels maintained throughout most of the game.

“We were down by six, but the girls just went crazy,” Dukes said. “In the fourth quarter, everyone just turned on and got used to the strange pool.”

Dukes said it not only took her until the fourth quarter to get used to the shallow-deep pool, but it also took until that point to grow used to the collegiate level of play.

“The whole game, I was just kind of rattled a little,” Dukes said. “But by the fourth quarter, I kind of calmed down a little just seeing my team play like that.”

Dukes and Griffin are currently working with the team to fill the large void left by the absence of senior goalie Laurel McCarthy, who is recovering from surgery for the entirety of the season.

The two freshman goalies have not been informed yet if they will continue to rotate as starters at next weekend’s Princeton Invitational.

“We’re both freshman, and we’ve both never played [for a collegiate program] before, so we split time the whole tournament,” Dukes said. “It was good for both of us, because it gave us a chance to see the game. We both needed that chance. We’ll see how it goes next week.”

—Staff writer Patrick Galvin can be reached at pgalvin@college.harvard.edu.