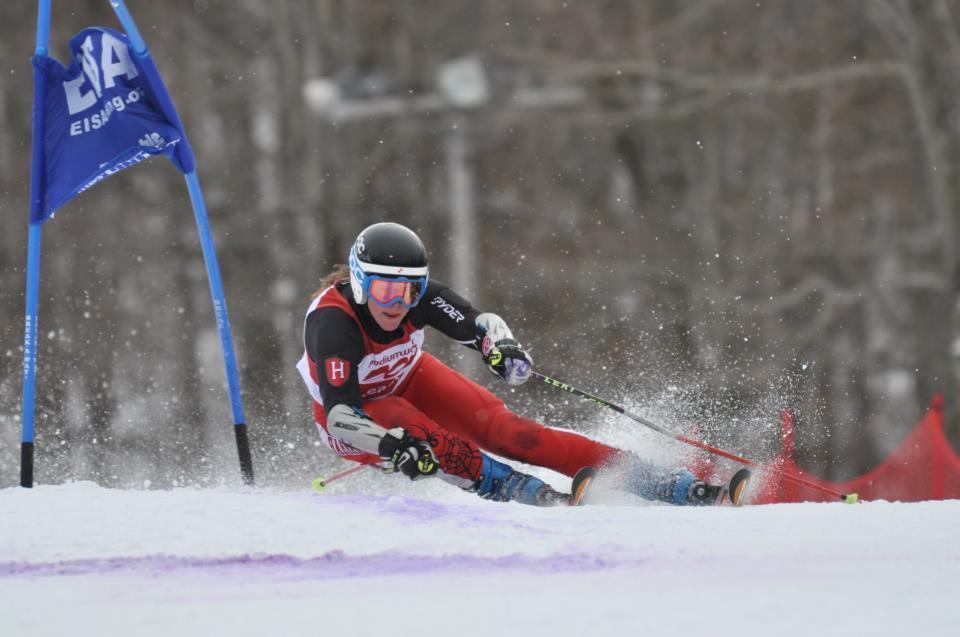 Sitting just behind first place in the giant slalom of the NCAA Championships, some athletes might have been nervous.

“I think Rebecca is single-minded in purpose,” her father Steven said. “When she makes up her mind, she’s going to do everything possible to get there.”

And so Nadler did exactly what she did on the first run: execute the race plan perfectly and lock up the first-ever national title by a Crimson skier in the process.

“The number of congratulations we got from almost everyone there—the number of congratulations I got—I’ve never seen anything to this degree,” coach Tim Mitchell said. “People who have no connection to Harvard skiing, people from competitor programs.... It’s probably one of the coolest experiences I’ve ever had as a coach or competitor. I’ve never seen anything like it. It was just absolutely amazing.”

The trip to Bridger Bowl in Bozeman, Mont., meant a sharp change in conditions for the lifelong Easterner who grew up in Ottawa, Ont., and skied for the Quebec provincial team and Maine’s Carrabassett Valley Academy in her two years before Harvard. But Nadler had no trouble adjusting to the softer snow of the west.

“You still want to ski very aggressively, but you also don’t want to dig in too much,” Mitchell explained. “We made the[ski] edges a little duller at the back end so the skis didn’t dig in and grind.”

The conditions also meant that Nadler had to let go of her aggressive skiing style and focus on conquering the course rather than the opposition.

“I can’t stress enough how well she executed,” Mitchell said. “It was literally 100 percent, spot-on every turn. She completely, completely nailed it. It’s kind of hard not to think about the win. To have the focus and determination to remove yourself from focusing on the result to focusing on the process...it was tremendous.”

“I was just trying to be patient and keep a good line, not jamming the ski under the gate,” Nadler said. “I was trying to bring over the things I’d been doing well in practice [like] having that long outside leg.”

Nadler’s title was only the latest and greatest in what have been many firsts for the Crimson alpine ski team. Recently, Nadler gave Harvard its first EISA carnival win in an alpine event, and last year, she and then-sophomore Catherine Sheils were the first Crimson alpine skiers ever to go to NCAAs.

At that event, Nadler was within striking distance of the EISA individual points trophy, holding the lead heading into the championship weekend when the University of Vermont’s Kate Ryley snatched it away.

Nadler exacted her retribution on Thursday by edging her new rival out by .38 seconds for the victory.

“She shares her successes but takes responsibility for her failures,” Roanne Nadler said of her daughter. “She will just dig in and work a little harder.”

“Rebecca has a favorite quote: ‘You can never fail until you stop trying,’” Steven added.

Nadler’s resilience has come in handy throughout her career, which hasn’t always played out according to plan. Nadler didn’t come to Carrabassett Valley Academy until her run at the Canadian national team fell short. While competing for Carrabassett, she was a dark horse candidate who wasn’t being recruited by the EISA ’s top dogs. Her visibility increased when she won the Eastern Cup that winter.

At Harvard, Nadler has had her share of obstacles even beyond those that come with the time strains of competing for a school from Boston. After a promising start to her freshman season and a 21st place finish at the World University Games, Nadler was hindered with illness and injuries for much of her rookie campaign but was able to rally in time for a 20th place finish in the giant slalom at the NCAA Championships.

This year Nadler simply took her skiing to a new level.

“Winning a national championship—it doesn’t get any bigger than that,” Mitchell said. “At the same time, it’s not unbelievable. I know what she’s capable of. I know how hard she works.”

The victory secured Nadler’s place as the Crimson’s best skier ever.

“I’m just overall a mess with how happy I am,” she said.