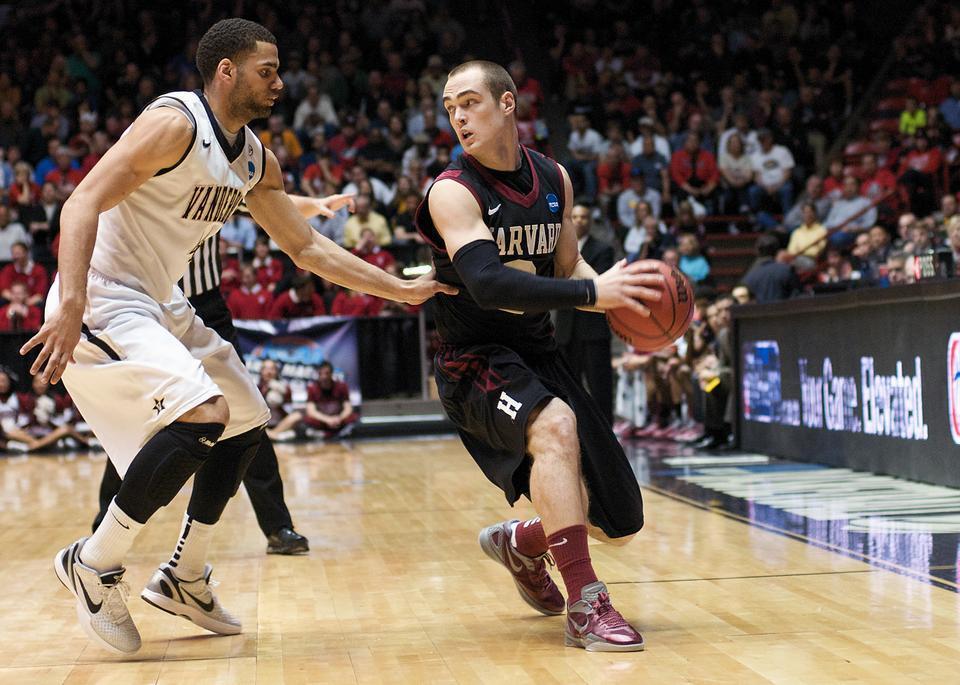 ALBUQUERQUE, N.M.—In each of its last three trips to the NCAA tournament, Vanderbilt entered its opening matchup favored to win. And three times in a row, the Commodores fell short of expectations, dropping games to 12-seeded Richmond, 13-seeded Murray State, and 13-seeded Siena in 2011, 2010, and 2008, respectively.

But Vanderbilt—fresh off of its first SEC championship since 1951—managed to avoid what would have been a fourth straight upset, beatinging the Harvard men’s basketball team, 79-70, at The Pit on the campus of the University of New Mexico.

“We’ve had a good amount of negativity about our first-round losses,” Vanderbilt coach Kevin Stallings said. “Our guys have had to listen to a lot of that. I’m really proud of them for not only what they did last weekend [at the SEC tournament], which was quite an accomplishment, but also what they were able to do today.”

With the win, the Commodores earned a chance to take on No. 4 seed Wisconsin—who handily defeated Montana just before the Crimson and the Commodores took to the court—for a shot at the Sweet Sixteen. On Saturday, the Badgers advanced with a 60-57 win.

Harvard—playing in its first Big Dance in 66 years—dropped to 0-3 all time at the tournament. And for the Crimson, Thursday’s game marked a bittersweet moment in a historic season.

“This is a dream to a lot of us, to be in this moment, to have this moment here,” said junior point guard Brandyn Curry. “It was a great experience, just unfortunately losing’s never good. It’s a tough loss.”

Before Thursday afternoon’s contest in Albuquerque, sophomore guard Laurent Rivard had not scored in double digits since Harvard beat Columbia at Lavietes Pavilion on Feb. 4. But the Crimson sharpshooter came alive against the Commodores, knocking down six-of-seven attempts from deep on the way to a team-high 20 points.

“[Rivard] hit some tough shots and bailed us out at the end of the shot clock a few times,” junior forward Kyle Casey said. “He was big for us today, keeping us in the game and keeping us close.”

Rivard’s shooting mark ties his season high in both three-pointers made and total points.

“I hadn’t seen somebody get that hot in a long time,” said Vanderbilt shooting guard John Jenkins, who led the SEC in scoring this season. “He was making them from everywhere, no matter how deep they were and [with] the shot clock going down.... It was very impressive.”

But while the sophomore was hot from long range, Harvard’s other shooters struggled to a combined 3 for 17 from deep.

Vanderbilt was led, perhaps unsurprisingly, by Jenkins, who finished with 27 points. The 6’4” shooting guard went 7 for 12 from the field and three of eight from three.

Jenkins—who entered Thursday’s contest averaging 19.9 points per game—had some help in the scoring department from seniors Jeffery Taylor and Brad Tinsley, who combined for 31 points. Vanderbilt finished the game shooting 54.3 percent from the field.

After nearly 15 minutes of play, Harvard was three points ahead of the Commodores.

But a 10-0 run starting with 5:03 left to play in the first half gave Vanderbilt a commanding lead as the clock wound down. Curry hit a three-pointer with 16 seconds to play to break Harvard’s scoreless streak. But Tinsley pushed his team’s lead back up to 10 with a three of his own just before the half.

“That’s something we’ve been working on all year, ending halves right and starting halves right,” Casey said. “It’s just something to work on for the future. I’m not too sure what happened, but it wasn’t a good sign.”

Vanderbilt rode its momentum into the second frame, making every shot it attempted in the first 5:35 and stretching its lead to as many as 18 points with 7:49 to play.

But Harvard went on a scoring streak of its own as the game drew to a close, outscoring Vanderbilt, 19-12, in the final five minutes of play.

“We’re a group that never gives up,” Curry said. “We weren’t going to fold. We could have just [given] in, but that’s not what this team is about, that’s not what we do. I’m proud of the way the guys put it on the line and tried to come back.”

“We feel like we belong here,” Casey said. “We got some shots to fall and we got real close, but just couldn’t finish it up.”