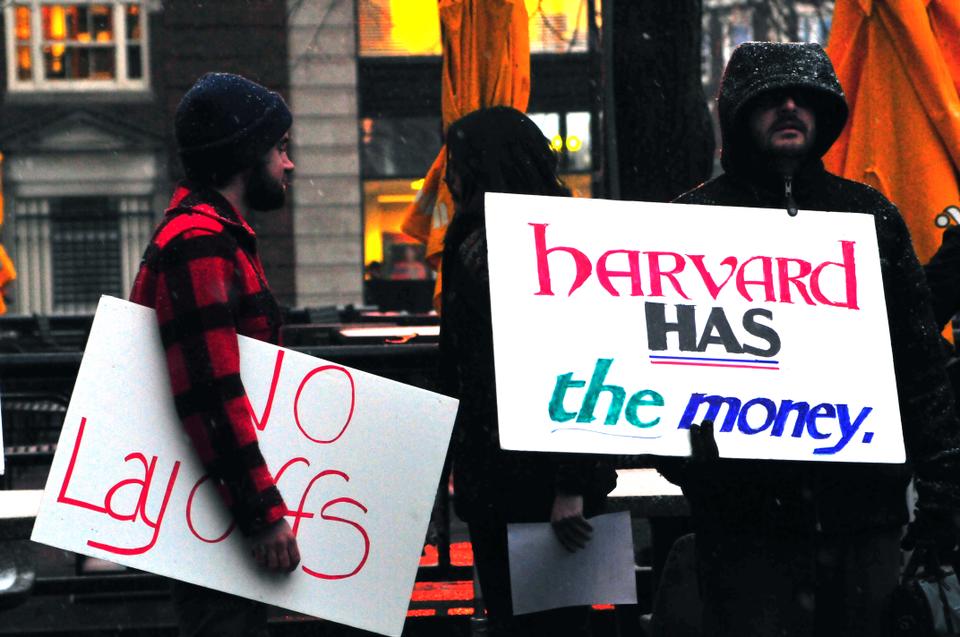 Approximately 50 protesters gathered in front of the Holyoke Center early Thursday evening to rally against layoffs which may result from the Harvard Library’s upcoming reorganization.

After a series of chants and a brief musical performance, the group marched into the Yard and circled Massachusetts Hall, University Hall, and finally Widener Library before returning to the Square. The protesters marched down the center of Mass. Ave., slowing traffic for five minutes before disbanding.

On Jan. 19, Harvard University Library Executive Director Helen Shenton announced that “the library workforce will be smaller than it is now,” and that the University was considering voluntary and involuntary options to reduce staff as part of the Library’s reorganization.

Since then, groups such as the Student Labor Action Movement, Occupy Harvard, and the No Layoffs Campaign have held a variety of protest actions against staff reduction, including an occupation of Lamont Library Café last week.

On Feb. 13, the University announced a voluntary retirement package for library workers. Two weeks ago, the Harvard Union of Clerical and Technical Workers, which represents library employees, proposed forming “joint councils” with library administrators to discuss the reorganization of the library.

Batzell said that while most of the forum was spent answering questions previously submitted online, it seemed to him that the administrators were expecting controversial questions about the library reorganization. According to Batzell, Garber said at the forum that it was possible that all staff reductions would be voluntary, but he refused to say for certain.

“He flew out of there,” Batzell said. “It was pretty disappointing.”

Harvard College library worker and HUCTW member Dawn M. Miller said that she attended the rally to express her concern about losing her job or her coworkers losing theirs. She said that she was hopeful that the councils would be helpful, but that the request for their formation was a “weak response” from the union that “should have happened six months ago.”

Francisco J. Maldonado ’14, who attended the rally, pointed to the fact that Harvard has the largest university endowment in the world to say that Harvard should not lay off workers.

Maldonado said he was satisfied with the way the rally turned out. “I think we got a pretty good showing in spite of this weather,” he said.