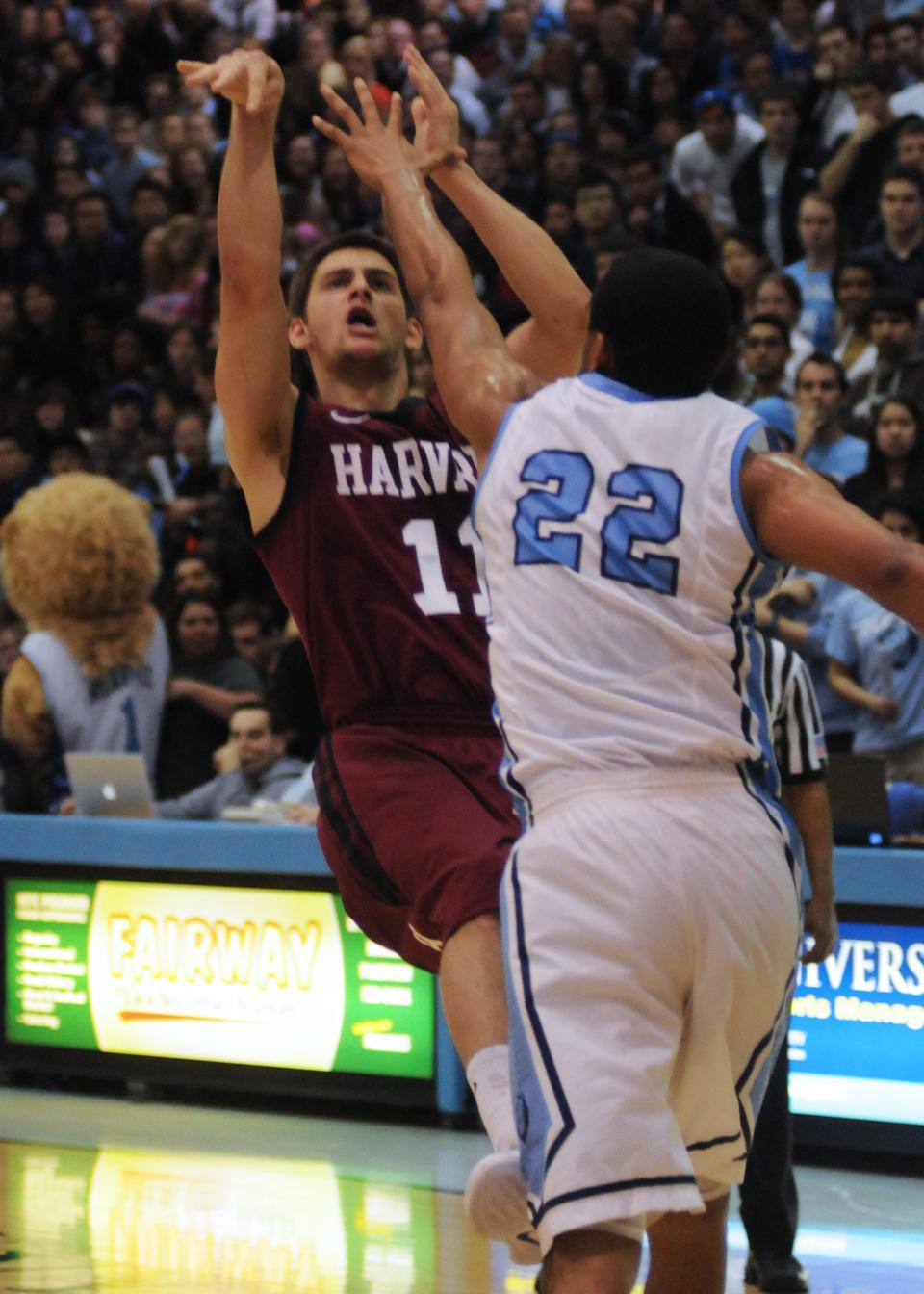 Co-captain Oliver McNally attempts a shot over Columbia’s Meiko Lyles during the Crimson’s 77-70 overtime win against the Lions on Friday at Levien Gymnasium. McNally finished with 12 points and four assists in 38 minutes of action. By Dennis J. Zheng
By Dennis J. Zheng, Crimson Staff Writer

“I think our league is sensational, and I think this is another example of that,” Harvard coach Tommy Amaker said. “What an effort by our team, to find a way [to win].”

Led by guard Brian Barbour’s game-high 23 points and five assists, the Lions (14-15, 3-10) again nearly pulled off an upset in front of a crowd of 2,702 that included New York Knicks guard Jeremy Lin ’10 and Spike Lee on Friday.

After trailing by six points with 4:16 remaining, Columbia tied the game at 62 on a Barbour finger-roll layup with 33 seconds left.

“He’s so crafty and slithery and makes plays,” Amaker said. “We have a number of guards in our league that are very difficult to handle off the dribble, especially that way we play in terms of wanting to play man-to-man. It’s challenging, it’s difficult, and we did the best we could.”

Harvard held the ball for the final shot of regulation, but co-captain Oliver McNally missed a three-pointer from the right wing to send the game to an extra period.

“We had the last shot, we had a great shot by our senior—a wide-open three—and I’ll take that every day of the week and twice on Sunday,” Amaker said.

“[We were] playing with fire—they had McNally, [sophomore wing Laurent] Rivard, and [freshman Corbin] Miller out there,” said Columbia coach Kyle Smith of his decision to implement a zone defense on the play. “I was like, ‘You know what, we haven’t been able to guard them in man, so what the heck.’”

Casey opened overtime with a short jumper, and both squads went scoreless for the next two and a half minutes until Rivard sank a left-wing three to make it 67-62 with 1:55 left.

The Lions responded with a jumper from the right side by center Mark Cisco, who was the team’s second-leading scorer with 12 points and five rebounds.

But Casey drained another three from the right wing on a kick-out pass from junior guard Brandyn Curry, extending the Harvard lead to 70-64.

Following a Barbour free throw, Columbia then missed its next three field goals, and McNally went seven of eight from the free throw line to seal the Crimson’s program-record 25th victory of the season.

Its latest win appeared to be in jeopardy for much of the second half, during which Barbour had 14 points.

The hosts led by three a minute later, before a pair of slam dunks by Wright and Casey pushed the Crimson back ahead by one.

The lead switched for the fifth and sixth times of the half when Barbour and McNally traded baskets, but at 10:50 a Casey three off a pass from freshman reserve Wesley Saunders made it 51-47 Harvard, which then held onto the advantage until the final basket of regulation.

Harvard quickly jumped out to an 18-8 lead eight minutes into the evening and took a 21-14 advantage on a three-pointer by McNally, but an 8-0 run capped by Barbour’s layup then gave the home squad its first lead since the opening minute.

Saunders pitched in five of his seven points in the final 3:20 of the half to send the Crimson into intermission with a 34-30 lead after shooting 75 percent from the field in the period.

“To their credit, all we worked on all week was defense,” Smith said. “I look at halftime and they shot 75 percent—that’s hard to do...I was so excited, I was like, ‘We’re only down four.’”

The Lions managed to keep the game within reach thanks to 10 first-half points by freshman Alex Rosenberg and 14 points off of Harvard’s seven turnovers.