Matt Birk ’98, center for the Baltimore Ravens and winner of the 2011 Walter Payton NFL Man of the Year Award turns his focus towards education and the community. 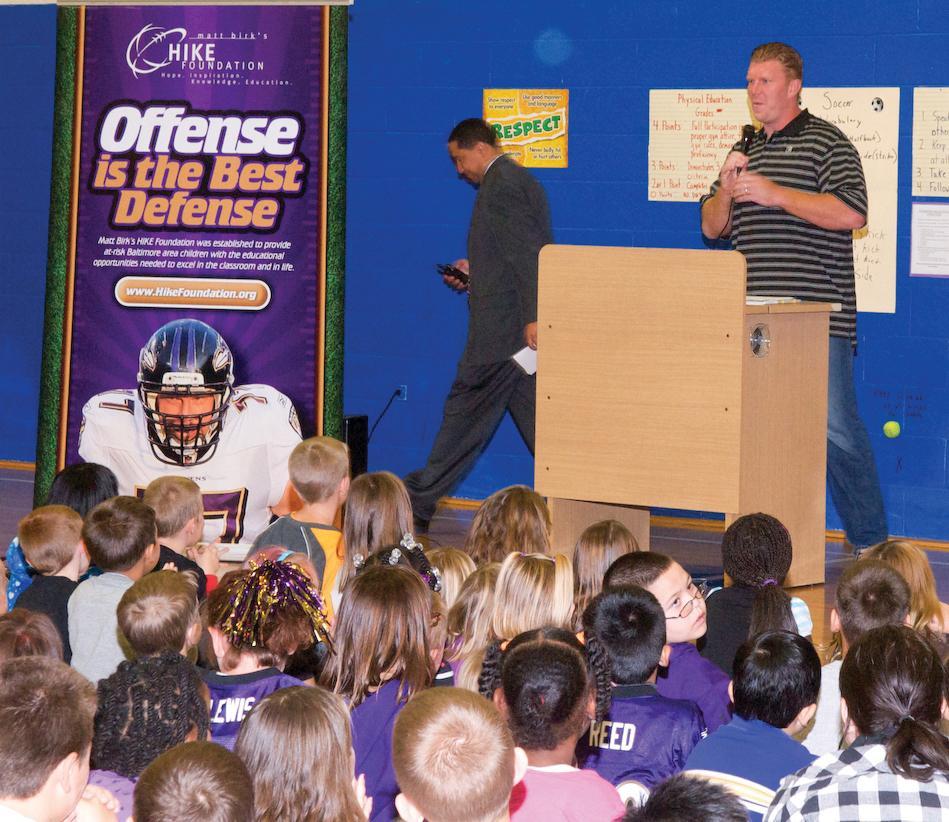 Adding to his numerous accolades for his on-field play, Ravens center Matt Birk ’98 was named the 2011 Walter Payton NFL Man of the Year for his work promoting reading and education in schools in and around Baltimore, Md. through his HIKE Foundation.
By Christina C. Mcclintock, Crimson Staff Writer

When Matt Birk ’98 was growing up in St. Paul, Minn., his family made faith, family, friends, and education their top priorities.

Not much has changed.

Sure, Birk has moved from Minnesota to Maryland, become a six-time Pro Bowler, and, most recently, been named the 2011 Walter Payton NFL Man of the Year; but his community of friends, focus on faith, and commitment to education have remained the same.

“It’s not difficult to hang around people who you share a lot of the same values with,” said Jim Runyon, Birk’s lifelong friend and classmate at their high school, Cretin-Derham Hall. “Everyone is still very humble, still very down to earth. They have the same values they had 20, 30 years ago.”

Birk’s Catholic upbringing and his family’s focus on education have inspired the center’s work at his HIKE Foundation, which promotes literacy among at-risk children in the Baltimore area.

“When I talk to kids, my message is always education,” he said. “What’s more basic than reading?”

It was a message Birk and his brothers received from an early age as part of a St. Paul community that emphasized family and education.

“It started with parents who believed that education was the backbone of any good future and good family,” Runyon said of growing up in St. Paul. “It wasn’t something you talked about as much as something you did.”

Birk and his HIKE Foundation now work in areas that need that kind of talk. And he earned the Walter Payton NFL Man of the Year Award because he has made those schoolchildren and their families listen.

“Once I was able to focus just on football, I was able to improve, to train more, to train smarter, [and] to put more effort into it” said Birk, who also competed in basketball and track in high school. “I had some great coaching along the way...I was like a hungry dog and they just kept feeding me.”

While Birk improved throughout his four years at Harvard, his biggest jump came between his junior and senior years.

“He started his junior year, had a rocky year, and was probably 6’5”, 275 [pounds]. He  came back his senior year at 300 pounds and dominated—simply dominated,” remembered Colby Skelton ’98, Birk’s teammate and blockmate who later moved to St. Paul.

Murphy concurred that Birk was the conference’s dominant player that season, adding that his position, offensive tackle, kept him from garnering more attention.

But Birk’s command of the line of scrimmage was enough to catch the eye of the Vikings, who drafted him in the sixth round of the 1998 NFL Draft with the 173rd pick.

And so the Harvard grad returned home to the Twin Cities, his home state unaware of the draft steal it had acquired.

When Birk returned home to Minnesota, his new team was all set at the line of scrimmage, leaving the Harvard alum to spend two years on the bench.

It proved to be a perfect scenario.

“When I got there, they weren’t relying on me to play right away,” Birk said. “There were some great offensive linemen who I could learn from—learn the game from, and learn how to be a professional football player.”

When Birk did get his shot on the gridiron, he quickly established himself as one of the top linemen in the league and earned a trip to the Pro Bowl in his first year as a starter, and Minnesota reached the NFC Championship that season.

“He’s very athletic,” Murphy said. “He’s smart in a football sense. He seamlessly made the transition from tackle to center.”

“They pulled the center a lot,” Birk noted of Minnesota’s offense. “For my size, I was fairly athletic. That scheme fit my skill set pretty well.”

But Birk’s emergence as a dominant player in the NFL didn’t shift his core values. Instead, Birk’s commitment to his family and community complemented his persona as a hard working football player, and Birk founded the HIKE Foundation in 2002.

The Vikings certainly took notice and named him the team’s Man of the Year for six straight years. Birk also earned the Ed Block Courage Award in 2006.

After 11 years in Minnesota, Birk signed a three-year $12 million deal with Baltimore Ravens in 2009.

“Matt has done a great job and we wanted him to return to the Vikings in ’09, but at this point Matt wanted a change of scenery,” then-coach Brad Childress said at the time according to The MinnesotaSCORE. “We wish him the best and know that he will always be a part of the Vikings family.”

Since signing Birk, the Ravens have advanced to the playoffs in all three years, making it to the divisional round in 2009 and 2010 and falling one missed field goal short of a trip to the Super Bowl in 2011. And Birk and the Baltimore offensive line have helped running back Ray Rice emerge as one of the top backs in the league. Rice earned All-Pro and Pro-Bowl selections in both 2009 and 2011 and finished the 2011 season as second in the NFL.

And Birk won over his teammates once again and was named the team’s Man of the Year in 2009 and 2011.

“We have great chemistry,” Birk said of the Ravens. “Guys really enjoy playing with each other. We feel grateful to be on that team. It’s going to be good for a long time.”

There had been rumors that Birk might retire after the 2011 season, and the center confessed that he was weighing his options in the month following the season, saying “I’m using this month to just relax and slow down, figure out what is the next move”, but on March 16 he signed another three-year contract with Baltimore.

Returning to the work that earned Birk the 2012 Walter Payton Man of the Year Award, it seems fitting that the center received the honor for his literacy promotion during his time the Ravens, a team that takes its name from the poem by Edgar Allan Poe.

“The void was bigger in Baltimore than it was in the Twin Cities,” said Jeff Ginn, executive director of the HIKE Foundation (which stands for Hope, Inspiration, Knowledge, and Education) . “It was a great opportunity for the foundation.”

Matt Birk’s HIKE Foundation, as it is formally known, partners with school districts to achieve its goal of promoting reading.

“Teachers already have more on their plate than they’ve ever had,” Ginn explained. “Really what we are is a gap-filler.”

Birk’s ability to connect, both with the schools and their students, doesn’t surprise his good friends.

“He was just a great guy, always fun, always had a smile on his face,” Runyon said of growing up with Birk.

“He’s a very passionate, gregarious, energetic speaker,” Skelton added. “He can strike a chord with the younger generation.”

The HIKE Foundation strikes this chord through its two programs, Ready, Set, Read! and Read and Rise.

“Our Ready, Set, Read! program encourages kids to read outside of school,” Birk said. “We get them in the habit of reading books for pleasure, and they’re recognized in their school…. We select one student, and we take them down to the stadium. We have lunch and give them a behind-the-scenes tour.”

Read and Rise, meanwhile, partners with Scholastic books to ensure that children have books of their own.

“It brings Scholastic book fairs to low income schools that otherwise wouldn’t have them,” Birk said. “All these kids get vouchers. They can go to the book fair and purchase up to five books. They can purchase books they want, and they have ownership. We invited the families or whomever the child is living with, we have a dinner, and we also have workshop on tips on encouraging their kids to read, developing strong reading skills. The goal is the same [as Ready, Set, Read!] to get kids reading at the youngest age possible.”

At the heart of the mission is the belief that children will read if they have the opportunity to read about things they enjoy.

“They will read the things that they find appealing and are drawn to,” Ginn said.

Ginn added that by the end of the school year the HIKE Foundation will have “put over 30,000 books in the hands of just over 10,000 kids.”

And none of it would be possible without Birk’s dedication.

“He should be the poster boy for the NFL about how to do things the right way, to do them with excellence and compassion,” Ginn said. “His passion, his vision for wanting to make a mark on education, it’s been incredible.”

“Matt understands his role isn’t just to be a football player,” Runyon added. “He understands ‘I’m in a position I’m not going to be in forever.’ He’s going to make the most of every situation. He’s done that.... Matt realized football’s for 14-15 years of his life. What he does for those kids is forever.”