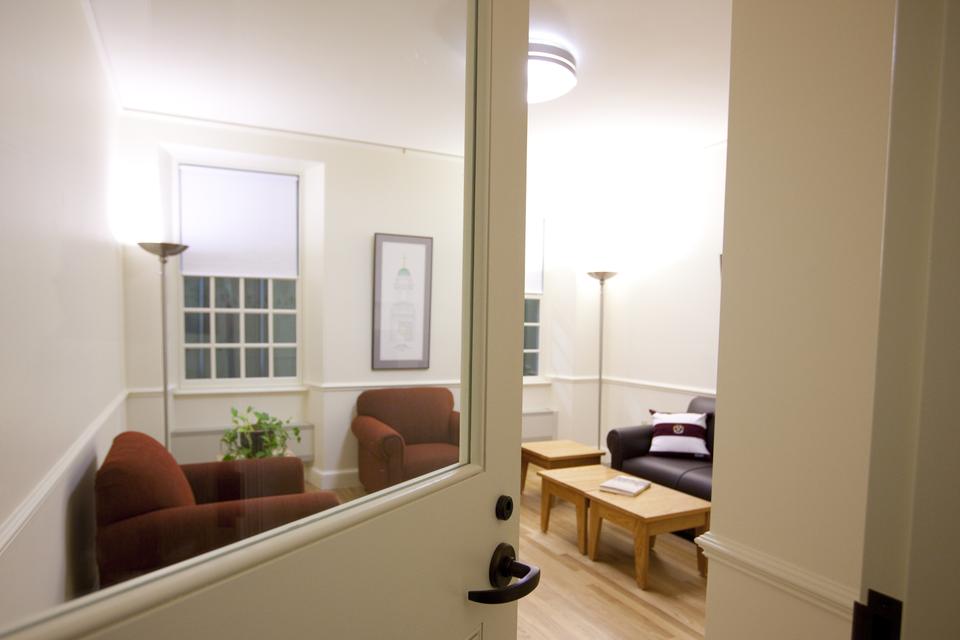 Quincy residents can expect common rooms resembling this life-sized mock-up when they move back into Old Quincy in Fall 2013 after its renovation. Old Quincy has been called a “test project” in the University’s plans to renew all 12 Houses. By COURTESY OF HARVARD NEWS OFFICE
By Nathalie R. Miraval and Rebecca D. Robbins, Crimson Staff Writers

When residents move back into the renovated Old Quincy in the fall of 2013 after its refurbishment, they will find flat-screen televisions waiting for them—courtesy of Harvard.

These screens—whose width has yet to be determined—and other furnishings are on display in a full-scale model of several rooms in revamped Old Quincy constructed by Harvard Planning and Project Management.

Tucked away three stories underground in an apartment parking garage adjacent to Harvard Business School, the mock-up is a hallway connecting a community bathroom and common room, a single bedroom, and a double bedroom. The set-up represents what administrators have dubbed a “cluster community”—a space in which 10 to 16 students share a common room and live in single or double bedrooms close by. These clusters will make up 50 percent of Old Quincy; the rest will be suites similar to the ones in which Quincy students currently live.

Dean of the College Evelynn M. Hammonds said that the cluster arrangement will eliminate walk-through bedrooms and increase the number of singles.

According to Steve Needham, a senior director for Harvard Planning and Project Management, all seniors and half of the juniors in the renovated building will be guaranteed a single bedroom.

The common rooms will feature non-operative fireplaces with wall jacks for students to connect their gaming systems and computers to the television screen, according to Faculty of Arts and Sciences Assistant Dean for Physical Resources Merle Bicknell.

FAS Dean Michael D. Smith characterized the mock-up as “the test project for the test project,” using the administration’s pet term for Old Quincy, the first step in Harvard’s ambitious plan to revamp all twelve Houses.

Administrators commissioned the mock-up, which took two months to build, to test whether certain elements of the rooms, designed in response to student feedback, function properly.

Students, tutors, House Masters, and other administrators have taken tours of the mock-up so that they can provide feedback on features such as the height of the lighting fixtures, the width of the desks, and the depth of the cubbies in the community bathroom.

Quincy House Committee co-chair Scott J. Yim ’13, one of nine Quincy residents who toured the mock-up last week, said that he and the other students suggested that administrators increase seating space in the common rooms, install bright lights in the bathrooms, and consider flat chairs in place of the existing rocking chairs.

Catherine G. Katz ’13, Yim’s co-chair who also toured the mock-up, said that she was most excited about the new bathroom design, which includes floor-to-ceiling toilet stall dividers that increase privacy and a new ventilation system.

Katz added that she was also looking forward to the common room televisions because she believes they will improve the social space.

“You may not need a TV, but it’s allowing for people to come together in a social setting where they might not have been able to do so before,” Katz said.

In an effort to promote sustainability, administrators said they aim to recycle as many of Old Quincy’s building materials as possible.

For instance, they plan to widen Old Quincy’s current doors by adding strips of wood to them rather than scrapping the doors altogether. The wider entrances will make Quincy fully wheelchair accessible.

“The general approach is to keep as much of the old building material as possible, if it’s still serviceable and if it will last,” said Mark R. Johnson, Harvard’s vice president for capital planning and project management. “The most sustainable option is always to use existing materials. To the extent that we use new materials, they will be subject to rigorous sustainability review.”

Katz said she thinks that incorporating parts of Old Quincy into the design maintains the historic aspects of the building as well.

—Staff writer Nathalie R. Miraval can be reached at nmiraval@college.harvard.edu