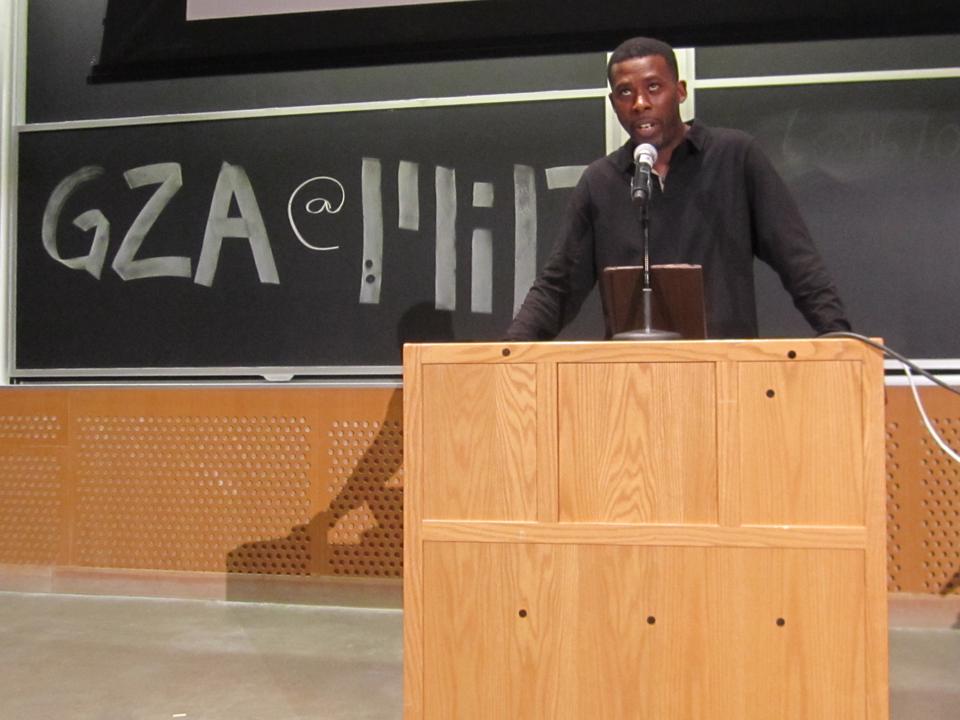 Gary Grice, also known as GZA and The Genius, spoke at the Massachusetts Institute of Technology on Wednesday, March 21. He is a founding member of the hip-hop group Wu-Tang Clan.
By Jason J. Wan, Contributing Writer

“When I was trekking across Brooklyn, looking for emcee battles—and believe me, there were plenty of those—I would never have dreamed I would be standing at this podium,” said Gary Grice, better known by his emcee names GZA and The Genius, in a talk at the Massachusetts Institute of Technology on Wednesday. “I must say, it feels very intimidating,” the emcee added. MIT Associate Professor of Comparative Media Studies Ian R. Condry ’87 moderated the lecture and discussion, entitled “GZA @ MIT: Hip-Hop as Civic Media.” In the talk, GZA focused on his growth as an artist and, in parallel, the development of hip-hop as a worldwide cultural unifier. He spoke softly and slowly, rapping excerpts a capella throughout the talk to a hushed audience.

GZA is a founding member of the seminal hip-hop collective Wu-Tang Clan and a widely acclaimed solo rapper in his own right. He visited MIT in December to learn more about the school’s scientific research, which he has used as a source of lyrical inspiration for his forthcoming album, “Dark Matter.” At the talk, GZA gave shout-outs to the MIT professors and students who showed him their research. However, he did not discuss the new material further.

Instead, GZA delved into how his adolescence in New York gave him respect for the craft of hip-hop lyricism. He described growing up in the burgeoning hip-hop scene with a series of vignettes, such as his attempts at making graffiti art with a ruler and the trips he took by “bus, boat, train, then bus” from Staten Island to battle other emcees with cousins and future Wu-Tang members RZA and Ol’ Dirty Bastard. “I remember going to the park and seeing these young poets, and I was blown away,” he said of visiting the Bronx. “I found my calling, and I said, ‘This is what I really want to do.’”

GZA claimed that Wu-Tang had built one of the largest brands in all of hip-hop and recounted that he had met people who had tattooed the Wu-Tang symbol on their body in shows of dedication. “I’ve seen a dude who had the Wu logo tatted on his face. I mean his whole face was tatted, but the Wu was the biggest thing on his face,” GZA said. “That is a statement, something that means a lot to us.”

Though he discussed his youth and Wu-Tang’s later international success, GZA spoke little about the formation and early rise of the group. “RZA had this idea—form Wu-Tang, ‘Protect Ya Neck,’ ‘Enter the 36 Chambers,’ you know—and now we’re here. Boom,” he said, quickly condensing the group’s history since their 1993 breakthrough song and album.

He emphasized that as hip-hop’s popularity had exploded, the genre gathered devotees worldwide. He noted that Wu-Tang’s success, from the group’s rise to mainstream acclaim to its current status as elder statesmen of hip-hop, has been international. “We’ve never toured in Africa, and yet, I’m constantly being told that people have visited certain countries in every corner of the continents, and seen people wearing Wu-Tang t-shirts all over.” With its global spread, he claimed, hip-hop was also adopted as a medium for discourse and resistance. “Hip-hop became the voice of rebellion and the youth, as rock music did in the ’60s,” he said.

GZA also claimed that the Wu-Tang Clan was responsible for introducing the world outside of Asia to kung fu. “You will see that samurai movies were sampled [by hip-hop artists] much later in Japan than in the U.S,” said Condry, who has written a book on Japanese hip-hop. “It was not seen as too cool. It would be like American rappers sampling cowboy movies.” Only recently, Condry said, have these Asian artists adopted such native cultural signifiers. “It kind of makes sense if you think about it, a dynamics of [what becomes] cool. It’s so dependent on context and history and what you already know,” Condry said.

GZA has rapped about such diverse and nontraditional subjects as chess moves, swordsmanship, and now cutting-edge science, but he seemed at a loss for words when asked why rap lyricism has not moved away from misogynistic and homophobic content. “I really can’t answer that,” he said, pausing. “It just hasn’t.” He went on to clarify that he believed there needed to be a more positive and uplifting paradigm in rap music, but says he is reluctant to address such themes in his own works.

Condry elaborated on that outlook. “It’s a mistake for us to look for politics entirely in the artists. The politics of hip-hop has to be with us, the audience, the fans,” he said.

At the end of the lecture, GZA was presented with an MIT hoodie, which he quickly discerned was too small for him. “That ain’t hood!” he jokingly shouted. It seemed an apt reflection of the unlikely partnership between MIT and himself—another sign of how widespread and widely respected hip-hop has become.