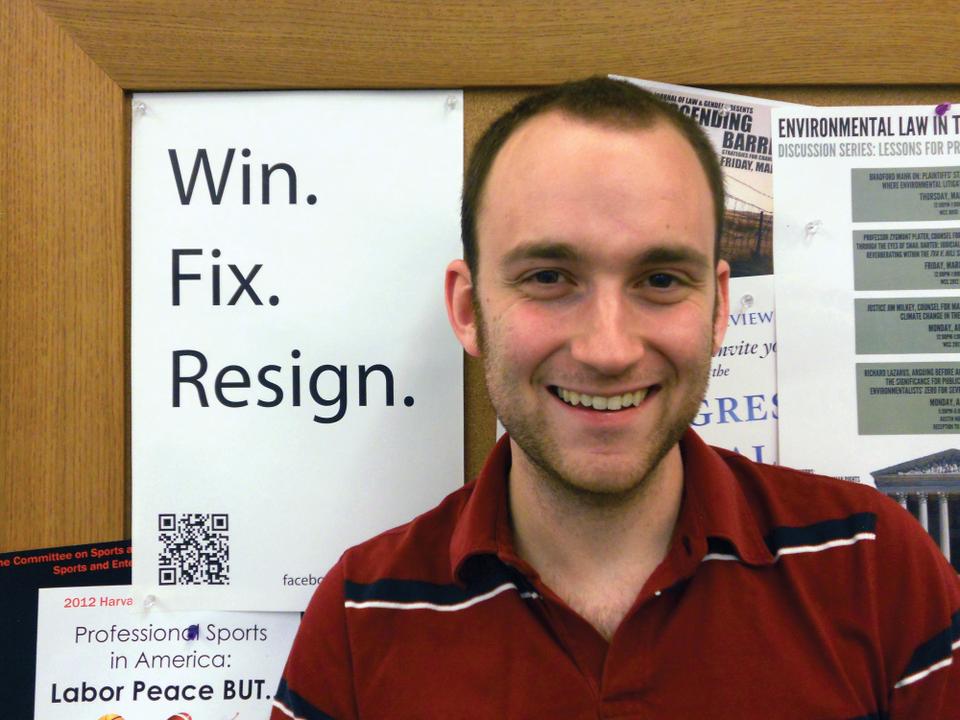 Although Harvard Law School student Matthew P. Gelfand knew he wanted to attend law school before graduating from Brown University in 2008, he did not know he wanted to be president of the Law School’s student body until Friday, March 2—five days before the election. His platform: to eviscerate and rewrite the current student government constitution, and then resign.

On Wednesday, March 7, Gelfand—who is in his third year and set to graduate in May—won an election that had been mired in controversy and gained national publicity. Less than a week after the election, he emerged victorious in a fight against four last-minute proposed amendments that would have hindered his ability to implement his vision. An opinion piece in The Record, the Law School’s student newspaper, called this last ditch effort “the Student Government equivalent of the Midnight Judges Scandal.”

On April 1 Gelfand will assume office and take on the ambitious project of overhauling the student government and rewriting its foundational documents in their entirety for the first time since its creation.

Spending most of his time outside of class as managing editor of the Journal of Law and Technology for the past two years and as a board member for the Harvard Law Entrepreneurship Project, Gelfand said he only considered the presidency after hearing from friends in student government that it was spending an “inordinate” amount of time amending its own constitution and bylaws.

When Gelfand looked at the constitution, he found that not only did it permit such internal editing and restructuring without student input, but also that it did not require that student government meetings be made open to the student body or release their minutes.

“People should not be allowed to hide behind some kind of weird privilege and not take ownership about what they say in student government meetings, which is sort of [a] no brainer for me,” Gelfand said.

Gelfand said he decided to declare his candidacy with the intention of rewriting the constitution to address structural and transparency concerns.

During the four days permitted for campaigning, Gelfand told students that he would rewrite the constitution and have it ratified by the student body before he and his appointed board would resign in time for commencement this May.

Gelfand spread the word about his platform through postering, tabling in Harkness Commons, and a Facebook page bearing his campaign slogan: “Win. Fix. Resign.”

He said that never expected to win, but hoped that his campaign would draw attention to the issues publicized in his candidate statement.

Gelfand’s unexpected victory was the result of a bizarre string of events that included alleged racism, emergency meetings with the Dean of Students, and the involvement of gossip blog Above the Law.

The two other candidates for president—student government representative Daniel B. Vargas, and current vice president Rachna Shah—became embroiled in a heated exchange after Vargas condemned a bylaw passed during Shah’s tenure as vice president that made it more difficult to form groups based on a national, regional, or state identity.

Shah responded to Vargas’s criticism with a 1,600-word letter to her 79 sectionmates that she asked them to distribute widely among the Law School student body. Her letter stated that Vargas’s claims were false and that he misrepresented her when he called her “discriminatory” and “racist.” Vargas claimed that he never used the word “racist.”

When Above the Law—a website that publishes news and drama in the legal world—caught wind of the controversy, it published and mocked Shah’s letter, calling her “’Joanne Galloway’ (after the character from A Few Good Men who is a total drag).” The blog also introduced Gelfand as “The Joker” and predicted that everyone who agreed that Vargas and Shah had acted “like little babies” would vote for Gelfand.

To prove it, they administered a poll. Gelfand received 90 percent of the 1,162 votes.

“It of course cannot be denied that I was helped by what happened between the other campaigns,” Gelfand said. “As that stuff sort of developed, I realized that my chances might be considerably higher.”

As the campaign spun out of control, Vargas and Shah attended several emergency meetings with Dean of Students Ellen M. Cosgrove, including one the night before the election to discuss postponing voting.

Gelfand sent an email to the Dean stating that the campaign had stressed the student body enough and that the election should go forward. She agreed.

The election took place the following day, and Gelfand won.

After the election some members of student government did not welcome Gelfand with open arms.

A week after the election, a series of last-minute amendments were proposed that would significantly impede Gelfand’s ability to enact his reforms.

For example, one amendment would have given current officers—including the Vice President Shah—a continued role after the official turnover on April 1.

Another amendment would have allowed students to attend meetings, but forbid them from speaking or participating in any way.

In an email to The Crimson, Shah wrote that the amendments had been “meant to allow for the transfer of institutional memory and aid in the transition process.”

A note written next to a provision giving the outgoing president and vice president a role reads “expire Commencement 2012?,” implying that the policy was crafted to apply specifically to Gelfand’s presidency.

“There is no way for me to read that amendment as not being motivated by at least somebody backing it with an interest in retaining power for themselves to prevent me from doing what I wanted to do,” Gelfand said.

Shah was listed as first signatory of the proposed amendments, followed by a list of nine other representatives of student government.

Gelfand publicized the proposed amendments on his Facebook page and inspired about 10 people—“Ten times the number of people who have ever attended [a student government meeting],” Gelfand said—to protest the amendments with him and his running mate, second year law student Jordan B. Roberts, at the meeting the following day.

All amendments were voted down.

Following the meeting Shah told Gefand that there were no vindictive motivations behind the amendments.

“Upon discussion in the student government meeting, however, it became clear (and I agree) that there are better ways to deal with transition outside of the constitutional realm, particularly given that Matt Gelfand intends to rephrase the Constitution anyway,” Shah wrote in an email. “Student government is glad that this important concern could be resolved through open conversation with incoming leadership.”

Though Gelfand’s presidency does not officially begin until April 1, he said that he is already laying the groundwork for a new constitution.

Gelfand said that next week he plans to send a survey to the student body to gauge student opinion about potential changes to the constitution and will likely publish the results, depending on the amount of feedback he receives.

Gelfand will also solicit applications from students who wish to serve on his board of directors, with the condition that they will resign when Gelfand does.

In the next four to six weeks, Gelfand said he will roll out a draft of the constitution so that it can be voted on by student government and then ratified by the student body before commencement. The student body never ratified the current constitution.

Though Gelfand plans to resign by commencement, he said that he would remain in the role after graduation—which is permitted by the current constitution—if the new constitution is not in place by May.

Gelfand was awarded a fellowship to work in the general counsel’s office of New York University next year. After, Gelfand said he plans to work as an in-house legal counsel for a non-profit, or on the business side of a non-profit charter school that may be launched by one of his close friends.

Administrators have expressed support for a fully independent student government, according to Gelfand.

In addition, he said that he would like to support the many student groups and student journals on campus that were fostered by former Dean of the Law School and now-Supreme Court Justice Elena Kagan.

“I am so glad I am at Harvard Law, rather than a place, even like some of our very close peer schools, where you can’t really participate on the journals as a 1L, and where there’s not a whole lot outside of class to do,” Gelfand said. “I am eternally grateful that that was not my experience and I think that most important of all is making sure that continues.”

—Staff writer Juliet R. Bailin can be reached at jbailin@college.harvard.edu.

An earlier version of this article incorrectly stated that Rachna Shah, who ran for president of the Harvard Law School student government, sent an email during her campaign to the entire student body. In fact, she sent that email to her 79 sectionmates and asked them to forward it widely. In addition, the article incorrectly stated that Shah called meetings with Law School Dean of Students Ellen M. Cosgrove during the campaign. In fact, though she attended meetings, she did not request them.