Men's Lax Ready to Take On Rival No. 3 UMass 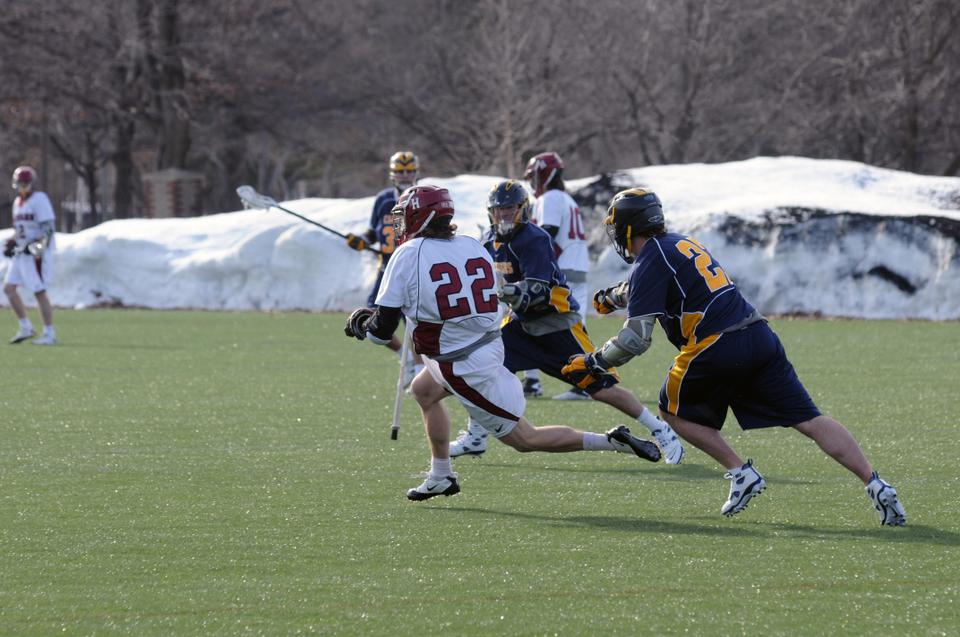 Sophomore attackman Daniel Eipp, shown here in earlier action, and a potent Harvard offense will look to be firing on all cylinders as it travels to Amherst Tuesday night to take on No. 3 UMass. The Crimson is trying to make it three in a row against its cross-state rival.
By Keith H. Bender, Contributing Writer

Following a 2-0 start in the Ivy League, the Crimson returns to non-conference play for the latest installment of this intrastate rivalry game. Harvard has won the past two years, but trails the Minutemen in the all-time series by 16 games.

On March 17, UMass notched its third straight one-point victory, a 9-8 overtime win on the road against Penn State to stay unbeaten. It has not played since, giving the Minutemen  ten days’ of rest and preparation.

Meanwhile, Harvard is preparing for a quick turnaround after defeating Dartmouth, 15-10, at home on Saturday. To ready itself for the playing conditions on UMass’ synthetic turf field, the Crimson has been practicing on Jordan Field, the home of Harvard field hockey.

When it hasn’t been adjusting to the speed of synthetic turf, the Crimson has been studying film of its opponent—with eyes on one athlete in particular: Minutemen junior attackman Will Manny.

Manny ranks third in the nation in points per game and leads his conference in points, goals, and game-winning goals. His performance this season has landed him a spot on the Tewaaraton Foundation’s watch list for the Tewaaraton Award, given annually to the nation’s best college lacrosse player.

“He’s really quick and a special offensive guy,” said freshman goalie Jake Gambitsy of Manny.  “We’re going to do our best to contain him and make them work as a team on offense, so it’s not just him showcasing his abilities.”

While the Harvard defenders prepare for Manny, their UMass counterparts are certainly well aware of the Crimson’s own high-powered offensive weapon: senior attackman Jeff Cohen.

Cohen, the reigning Ivy League co-player of the week, has scored five goals in three straight games and is tied for second in the nation in goals per game. Harvard’s fourth all-time leading scorer is a familiar foe to the Minutemen, netting three goals in last year’s matchup with UMass, two his sophomore year and one as a freshman.

Cohen leads a Crimson offense that has posted double-digit points in all but one of its games and is coming off a season-high 15 goals on Saturday.

“[Freshman midfielder] Keegan Michel is winning faceoffs in bunches and allowing us to have fast breaks, [sophomore attackman] Danny Eipp is doing a phenomenal job behind the cage, and Jeff Cohen is shooting the ball as good as anyone in the country,” co-captain attackman Kevin Vaughan said. “It’s easy to score goals when those guys are playing well.”

If this season is any indication, though, that ease of scoring may not translate so smoothly against Minutemen senior goalie Tim McCormack. McCormack has held all opponents to single-digit scores this year and ranks fourth in the nation in save percentage.

McCormack anchors a solid Massachusetts team that, according to Harvard head coach Chris Wojcik ’96, has no conspicuous weakness.

“They’re very good everywhere,” Wojcik said. “They score, they play excellent defense, they’re strong in goal. There isn’t a particular area we’re looking to exploit. We’re going to have to play really well in every phase of the game to win.”

Last year, after his squad downed UMass, 11-9, Wojcik told The Crimson, “This game was all about bragging rights for being the best team in the state of Massachusetts.”

The claim to the top spot in Massachusetts may not be on the line against the undefeated Minutemen this year, but Harvard can certainly make an impactful statement on a national level with a win on Tuesday night.

“It could be a great win for us to knock off a top 5 team and improve our resume going into the second half of the season,” Vaughan said.

And for those who will be in Amherst, there is no doubt that the atmosphere will be charged with the competitive energy that has characterized each matchup between these two teams for the past 42 years.

“UMass is always one of my favorite games to play every year,” Vaughan said. “I’m pretty excited for the game. I’m sure they’ll have a rowdy crowd at their home turf. It’s a great in-state rivalry for us.”