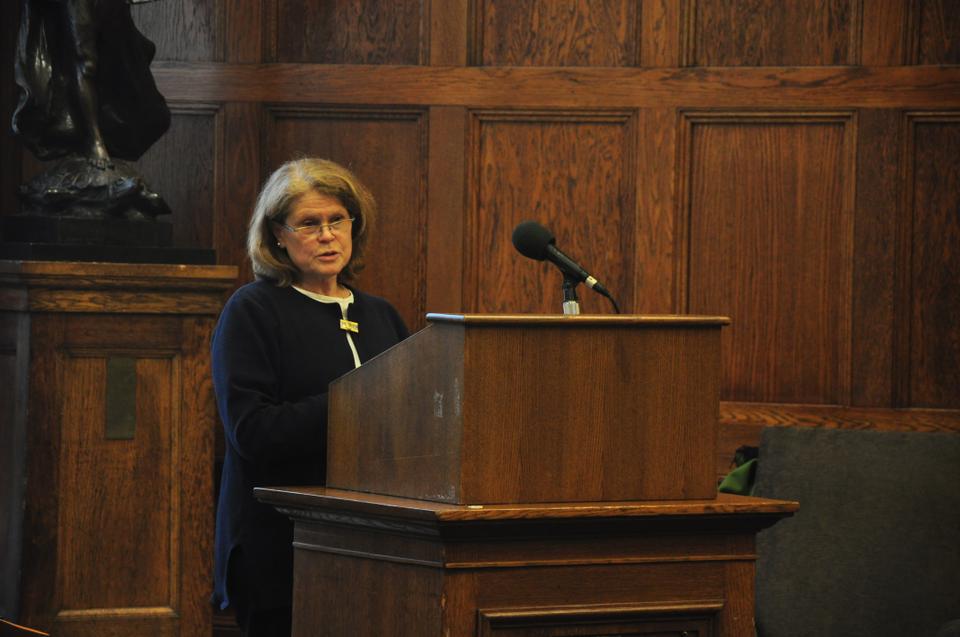 Janet Katz, a senior research librarian at the Harvard Law School Library, speaks about the recent cost-cutting measures at Harvard libraries. She was one of the speakers at the Harvard Forum on the Future of Libraries on Tuesday.
By Dan Dou and Samuel Y. Weinstock, Crimson Staff Writers

At a panel discussion on the reorganization of Harvard’s library system, faculty members and library staff members voiced many of the concerns pertaining to librarians’ job security, the future quality of the library system, and communication and commitment from Mass. Hall that have all plagued the reorganization effort since the January announcement that the restructuring would involve staffing cuts.

During the discussion on Tuesday, University Librarian Robert C. Darnton ’60 said that there had been “a series of catastrophic misunderstandings” during the reorganization process but assured the crowd that “those of us in the library take this [dialogue] very seriously.”

He said that “the impression [among staff] that there would be sudden, brutal, [and] massive layoffs” was not true. At this point, he said, administrators “don’t have any idea of what the size of the staff will be.”

More than four weeks after announcing that the library would shrink its workforce without revealing how many workers it would cut nor how it would select them, the University offered long-time employees a voluntary retirement package in February.

History professor Lisa M. McGirr called upon the University to think beyond financial cares when making decisions about the size of the staff.

“Harvard is, and should continue to be, more than that,” McGirr said. “Efficiency can be a good thing and doesn’t require layoffs—we should proceed with great care and caution.”

But the discussion on Tuesday covered topics beside the looming threat of involuntary layoffs which has sparked numerous protests on campus throughout the semester.

Harvard Union of Clerical and Technical Workers Director Bill Jaeger, who was unable to attend the forum, said that he perceives the University’s message to have moved away from the subject of layoffs since the “stark announcement of January 19.”

The conversation on Tuesday followed that tack.

Darnton acknowledged that stakeholders are concerned about service quality from the library and said he shared those worries.

“I was upset to see that services had declined in many ways,” he said.

But he said that the University’s support for the libraries has not decreased; if it had, he said, he would have resigned.

Janet Katz, a librarian on the panel, said she was specifically anxious about the cataloging of volumes in the near future.

“I know how excellent HOLLIS is,” Katz said about the library’s online catalog system, “and I just hate to think it would become any less.”

Panelist and classics professor Richard F. Thomas said he had been disappointed by the level of faculty and librarian involvement in the decision-making process thus far. “We need more than just conversations between the people who are putting [in] the system and librarians,” he said. “We need actual input from librarians who are willing to give it and have the expertise to give it. I think librarians and faculty embrace change, but that change has to be change that doesn’t diminish the quality of the libraries in all media.”

—Staff writer Dan Dou can be reached at ddou@college,harvard.edu.