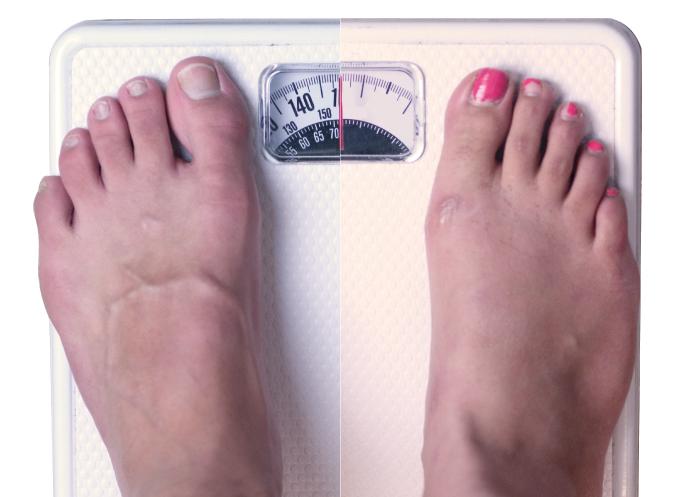 She performs stunning feats of physical prowess in front of hundreds of fans. Under the gaze of the cheering crowd, she exhibits her body’s capabilities week after week. When she falters, her mistakes, her pain, her sweat, her tears are all on display under the lights of the arena or the gymnasium.

She spends her days perfecting her art, her craft, her skill, her game. She focuses on every muscle, works each inch of her body until it hurts and until it doesn’t hurt anymore. Her body has a job to do.

She plays the same game the men play. She has worked hard for her spot on the field or the ice or the court, and she knows it is hers.

She is the female athlete, and she has a secret. Her weight.

The rosters on GoCrimson.com for Harvard’s varsity sports teams list the weights of men’s baseball, basketball, ice hockey, lacrosse, soccer, and volleyball players. For the equivalent women’s teams, the rosters have no column for players’ weights.

This policy of publishing men’s weights but not women’s is by no means unique to Harvard. All Ivy League schools do the same, as do most colleges and some high schools.

The only women’s sports league at any level known for publicly disclosing players’ weights is the WNBA. Even there, the weight spot on the roster remains blank for a few players on almost all the teams in the league.

The athletic department’s decision to leave women’s poundage off the roster reflects a much weightier constellation of concerns about body image, eating disorders, privacy, and equal treatment of female athletes. Most women on sports teams say that whether or not they are comfortable with their own body size, they are happier with it off the internet. But for a few, the omission of a statistic that men’s rosters include represents a failure in the decades-long push for equality for female athletics.

“When you’re talking to girls, one of the things you’ve always been told not to do is ask them about their weight,” says Keith Wright. As a senior basketball player, Wright says he’s used to seeing his weight listed publicly—even as a secondary school player when he worried that he needed to lose weight in order to keep up with his smaller teammates—but he would never expect the same of his female counterparts.

Assistant Director of Athletics Kurt K. Svoboda agrees, “It probably speaks to a larger issue of social conformity or norms and what is discussed and what isn’t.”

Whether they play a sport or not, college women confront images of super-thin magazine models and movie stars that set a standard for female beauty nationwide. Compounded with the intense competitive drive and the capacity to push one’s physical limits that female athletes hone, elite sports players are much more susceptible to unhealthy attitudes toward their body size than the general population. Top female college athletes are more than twice as likely to develop dangerous eating disorders like anorexia and bulimia compared to the general college-age female population, according to the National Association of Anorexia Nervosa and Associated Disorders. As many as a third of women who play Division I sports in college show symptoms that put them at risk for anorexia, ESPN reported.

With these stark statistics illustrating that many women who don Crimson jerseys might be in danger of harmful self-starvation or purging­­—behaviors that can cause problems ranging from stress fractures to intestinal damage to fatal heart irregularities—Harvard’s athletics staff keeps a watchful eye on female players’ body images.

“It’s the culture for women that we live in. It’s the media; it’s the modelling—the culture in our world is so different and damaging for women than for men,” says Kathy Delaney-Smith. In her 30 years coaching Harvard’s women’s basketball team, she adds, “I’ve had a lot of my share of eating disorders.”

She talks to her players about what she terms “performance weight,” the ideal weight that would help each woman do best on the court. But those conversations are minimal.

Senior women’s basketball player Brogan Berry says that on the rare occasions when she and her teammates have been weighed by the athletic department, the trainers do not even show them their weights.

“Female body image is always still a huge problem among athletes. I don’t think it’s necessarily a bad thing that we tend to keep it to ourselves,” Berry says. “I don’t know many female athletes who would be willing to put their weight on a public roster.”

The weight of almost every male athlete is listed on the Harvard athletic department’s website. If a player does not want to be listed, according to Svoboda, he can indicate his preference to be omitted from the roster altogether. He cannot be on the roster without listing his weight.

When Svoboda writes press releases for the Department of Athletics, he says, he commonly mentions male players’ weights alongside background information like their hometowns.

Just because these statistics are easily available and widely distributed, though, does not mean they are true.

“There are many people who list their weights in the program as 10 pounds above what their actual weights are,” says junior men’s lacrosse player Brad Cappellini. “As a guy and a competitor, you fear the bigger, stronger person more.”

He estimates that up to 75 percent of male players weigh less than the rosters say they do. “I know guys on my team do it. I mean, I’ve done it,” he says.

Svoboda acknowledges that the public height and weight chart might make some players squirm. “Whether you’re talking about males or females, there are people who are conscious of their body types,” he says.

But in men, this anxiety more often springs from concern that their bodies are not perfectly suited to athletic performance than that they don’t look good enough.

“A guy feels secure, has a stronger sense of self, when he sees next to his name a weight that...makes him successful at his sport,” Cappellini says.

For Cappellini, the fact that women’s weights are not listed indicates that women do not derive pride in their weights for the same reason men do. “Society,” he says about women, “doesn’t make them change their body weight to affect their sport. It makes them want to adapt to a social standard.”

Sophomore women’s rugby player Brandy Machado says, “There seems to be pressure to be very small, and I think that’s less about performance and more just about social pressures for women.”

James Frazier, the director of strength and conditioning for the Department of Athletics, says he has met far more women who come in to training sessions talking about a goal weight that they aim to achieve—nearly always under their current weight, not over it. But he knows that plenty of men fib to increase their weights for the public listing.

SIZING UP THE COMPETITION

Whether the weights on the rosters are strictly accurate or not, coaches and players of men’s teams turn to them frequently as a useful reference.

Before a game, many say that they  often look at the opposing team’s roster to plan Harvard’s defensive configuration.

It is for that reason, women’s soccer coach Ray Leone says, that he keeps not only weight but also height off of his team’s public roster.

“It’s purely just a competitive thing, because they can know who to mark just by the height of them,” Leone says.

But despite the fact that many players say they consult other teams’ rosters as part of their pre-game strategizing, Svoboda is skeptical of the usefulness of that practice, saying that teams have other ways to preview their opponents.

“I’ve heard that, and I kind of chuckle,” he says. “With most sports, you get such a prolonged warm-up period, and there are so few secrets in today’s day and age with video and film, certainly at the Division I level. Is having that information truly helpful? In the 45 minutes of warm-up time, can you pretty much size up, ‘Oh, that center on the basketball team is a mammoth individual?”

WEIGHING THE PROS AND CONS

The strategic benefits of public weight listings may not be a major issue, but the symbolic importance of choosing to provide men’s weights but not women’s is significant to some commentators.

“It’s like the elephant in the room,” says Laura Pappano, the director of the Women’s Sports Leadership Project at Wellesley College. “It’s a loud omission. I think women should be proud of being fit, beautiful, strong athletes.”

Cappellini agrees. “I think that living an athletic lifestyle and making sacrifices to be an athlete—and all that goes along with that—demonstrates that you do have an inherent care for your body,” he says. “There should be naturally a sense of pride that comes along with all that.”

That pride, he thinks, could be reflected by listing women’s weights so that fans, opponents, and recruiters can see.

“You don’t need to have the prettiest body. You need to have the body that’s most efficient, strongest, fastest. Sometimes when we talk about the girls, we’ve lost sight of that,” he says. “Girls work equally as hard as guys as athletes, so why shouldn’t we list their weights? They should be proud of that.”

Many female athletes disagree, saying that it is unnecessary to equally violate privacy in the name of fairness.

“I get the whole, ‘We don’t want to make such distinctions between female and male sports and try to equalize them all,’” senior women’s volleyball player Christine Wu says. But she would not want to see weights online. “People might get uncomfortable.”

Freshman women’s basketball player Kaitlyn Dinkins agrees. “Obviously we work just as hard as the men do,” she says. “We are very conscious about being in shape and being muscular and toned, but I don’t think personally that female athletes would want it. It’s about not being too—I guess ‘manly’ is the term.”

Pappano, who wrote a book on gender disparities in athletics called “Playing with the Boys: Why Separate Is Not Equal in Sports,” agrees that fear of seeming masculine partly lurks behind women’s discomfort with seeing their weights posted in public.

“There’s a long history of efforts to feminize women’s athletics,” Pappano says. “They’re judged by a set of standards that men are not judged by.... They need to be physically attractive in a female way, and yet they need to also be athletic and strong. Culturally, socially, I think it only perpetuates the problem when we hesitate to list weights on rosters.”

Some are glad and others are resentful to see athletic departments make one fact private in the sphere of athletic performance, which is otherwise inherently public.

“Their bodies are on display,” Cappellini says. “If they’re not afraid to get in front of a crowd of 10,000 people at Harvard Stadium, why would they be worried about putting down their weight?”

— Staff writer Julie M. Zauzmer can be reached at jzauzmer@college.harvard.edu.