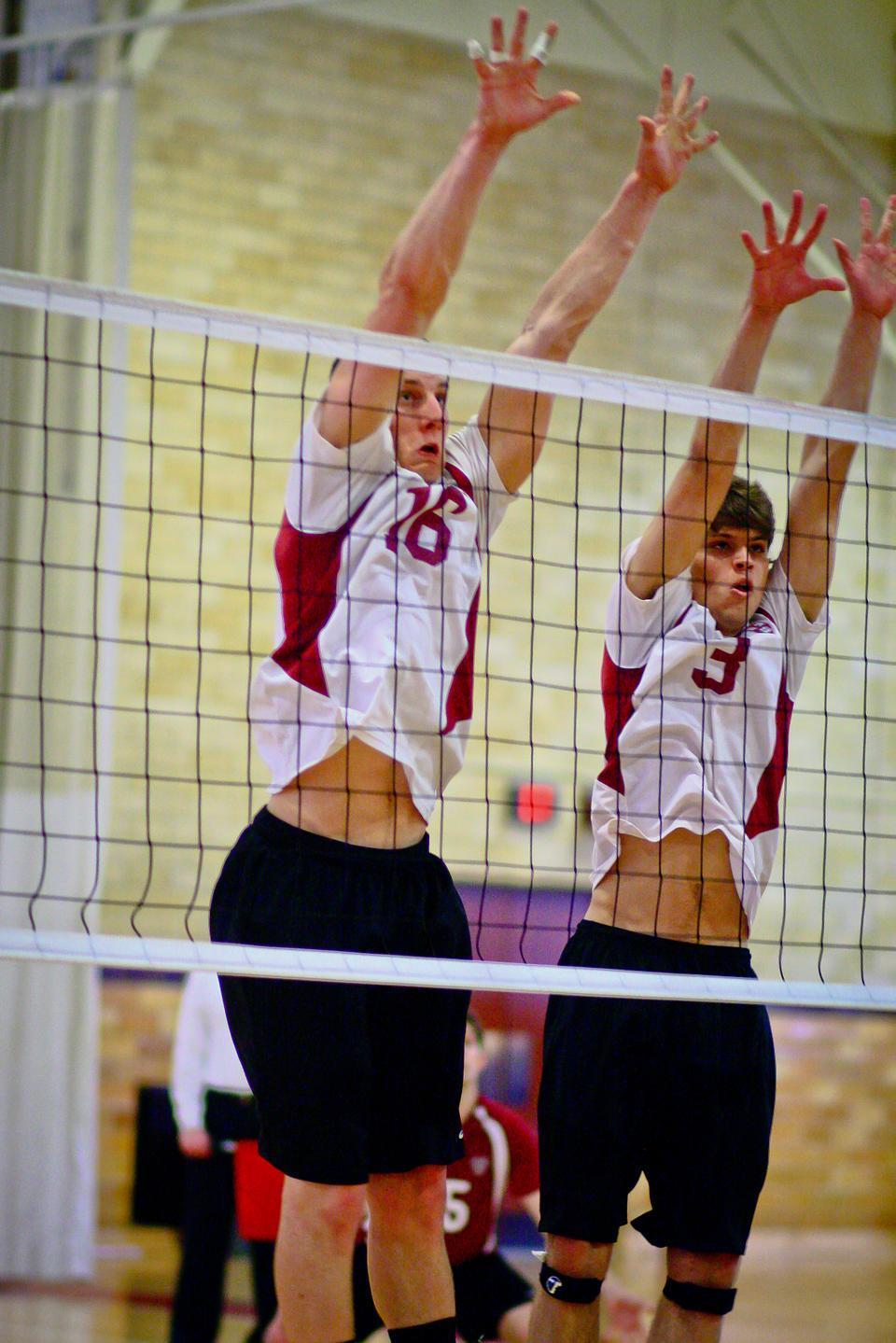 Sophomores Nick Madden (left) and Will Chambers (right) go for a block during the Harvard men’s volleyball team’s 3-0 win over NJIT on Saturday at the Malkin Athletic Center. Madden finished the game with 13 kills, good for second best on the Crimson behind co-captain Matt Jones. By Shunella Grace Lumas
By Blake Sundel, Contributing Writer

The fans rose to their feet as the Harvard men’s volleyball team delivered its final serve of the evening. To the crowd’s dismay, the Crimson failed to convert the match point.  But the cheers continued until the next serve, when the New Jersey Institute of Technology server sent a ball high and out of bounds, ending the final home game for Harvard co-captains Matt Jones and Dan Schreff.

The Crimson (16-3, 8-2 EIVA) capitalized on strong defensive play to ensure that its seniors left the Malkin Athletic Center with fond, final memories, defeating conference opponent NJIT (10-13, 4-4) in three straight sets. The victory marked Harvard’s fourth win in a row, and the tenth in its last eleven games.

“NJIT is a really good team,” Schreff said.  “It was a really good battle today. What I thought we did well today is our blocking. [Friday night against Rutgers-Newark] we weren’t closing out our blocks, so tonight we got our hands on some of those hard driven balls and allowed our back row to pick up some of those digs. The defense really stepped up tonight.”

It took a while for the home team to find that defensive energy, though, as the Crimson held a slight, 14-13, lead over its opponent late into the first set.  Harvard scored the next three points to stretch its lead to 17-13, but the Highlanders continued to fight. The score stood at 20-16 when the Crimson elicited cheers from the crowd with two blocks. Harvard remained stalwart on defense until it had won the first frame, 25-18.

The Crimson carried that momentum into the second set, jumping out to a commanding 11-3 lead. It looked like Harvard was primed to run away with the lead until Highlanders’ coach Ryan McNeil took what proved to be a crucial timeout.

Whatever McNeil said in the huddle inspired his team, as NJIT came out of the break on a 5-0 run, forcing Crimson coach Brian Baise to call a timeout of his own. Harvard regained its composure in subsequent play, going up, 24-16. But the Highlanders did not give up. Undaunted by its large deficit, the Highlanders scored another five straight points.

The latest NJIT run prompted another timeout for the Crimson. Again, Harvard came out of the huddle strong. The team picked up the final point of the set when Jones recorded one of his team-high 14 kills, ending the frame, 25-16.

“Really, the first two games total were decided by runs,” junior setter Rob Lothman said. “The first game we started off pretty slow and got hot at the end, and the second game we started off hot and got slow at the end. It would be nice to put together a really solid game on the whole and not have a run in the middle like the one we give to the other team.”

The Highlanders came out strong in the third set, taking an early 2-0 lead. The Crimson evened the score and proceeded to take a slight advantage until NJIT tied the game at 12.

Although the Highlanders managed to wrestle back the lead, the home team was not to be denied. Harvard tied the game at 14 and then took the lead, which it would not relinquish. The Crimson went on to win the final set, 25-21.

“It was fun…to get a win in three in front of our home crowd, and it’s a big league win regardless of the day,” Jones said. “It is weird to think that this is the last game I’m going to play in the MAC ever again.”

“This feels really good,” he said. “The season is going really well, so it’s awesome to close out our homestand with two victories and a strong home crowd.”