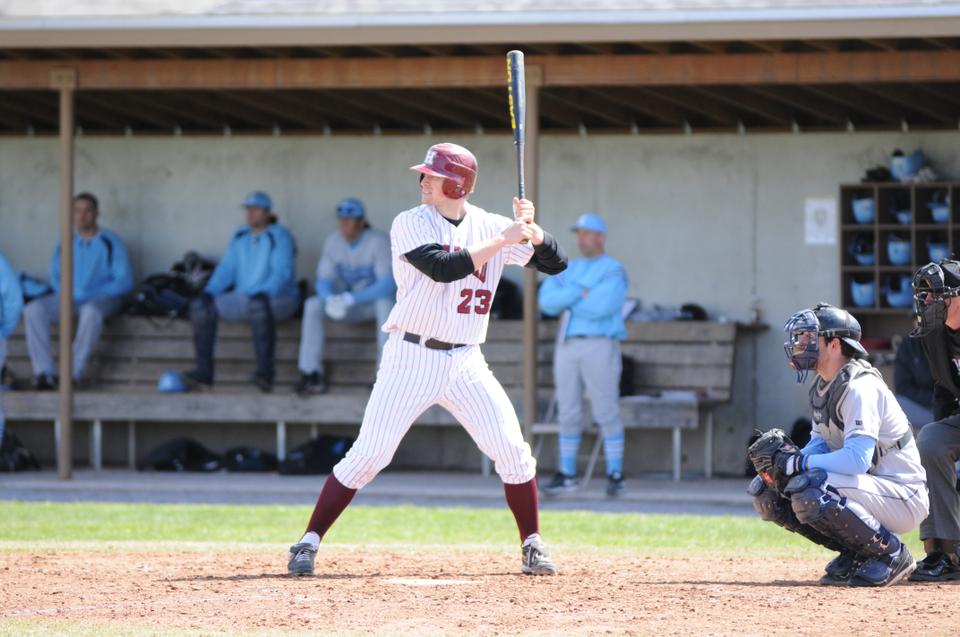 Senior Marcus Way, shown here in earlier action, went 3-for-3 with 2 RBIs to lead the Harvard baseball team to a 6-5 win in game one of Saturday’s twinbill against Brown. The Crimson fell 22-9 in game two.
By Keith H. Bender, Crimson Staff Writer

With a chance to sweep Brown and gain extra momentum for the season’s decisive final series against Dartmouth next weekend, the Harvard baseball team won in dramatic fashion in the first game of Saturday’s doubleheader but dropped the second contest in a high-powered slugfest.

After taking three out of four games from the Bears (8-29, 5-11 Ivy) this past weekend, the Crimson (11-27, 7-9) sits four games back from the Big Green (17-15, 11-5), the Ivy League Rolfe Division leader. To tie for the division title, the Crimson must beat Dartmouth four times in a home-and-home series next weekend.

“[Winning three out of four] is huge,” said senior designated hitter Marcus Way. “We really needed it confidence-wise to have a shot at playing in the Ivy League championship.”

In game two, both teams combined for 31 runs on 41 hits in the highest-scoring Ivy matchup of the season.

Brown’s potent offense, which claimed a lopsided share with 25 hits and was aided by five Harvard errors, proved too much for the Crimson to overcome. It was the second time the Bears posted 22 runs this season, having last done so against Maine on Mar. 1.

Defensive miscues and pitching trouble prevented Harvard’s 16 hits—seven of which went for extra-bases—and a season-high 9 runs, from being enough to win.

Freshman Tanner Anderson took the mound for the Crimson but was unable to finish the first inning, giving up a run on a wild pitch and trading two bases-loaded outs for runs. After appearing to settle down and record those two outs, Anderson surrendered a home run and a triple to make the deficit 6-0.

Harvard coach Joe Walsh handed the ball to freshman Matt Timoney, who pitched 3.1 innings of relief, giving up three runs, two of which were unearned.

Freshman center fielder Mike Martin’s three-run homer in the second pulled the Crimson within two runs, but that was the closest it came for the rest of the game.

Sophomore Baron Davis replaced Doyle and was hit for five runs, though all were unearned.

With runners on first and second and one out, Bears right fielder Will Marcal sent a grounder back to Davis, who fired an errant throw to third. All runners reached base safely, loading the bases.

“Obviously, we would have liked to have taken that second [game], but what can you do when a team puts up 22 runs and 25 hits?” asked junior third baseman Kyle Larrow.

Way tallied his third hit in Saturday’s opener with a walk-off, solo homer to lead off the seventh inning.

“I was on deck,” said Larrow, who was batting behind Way. “Marcus looked at me and he goes, ‘Would you be mad if you didn’t hit here?’ and I said, ‘No, I probably wouldn’t care that much.’ And he put it out there.”

Way’s homer came off of David St. Lawrence, whose 1-0 fastball was sent over the right field wall, sending Harvard’s players running out from the dugout.

Sophomore shortstop Jake McGuiggan also had three hits in the contest and scored a run on Way’s double in the first.

After junior starter Joey Novak retired the Bears in order in the first, the Crimson opened the scoring when sophomore catcher Steve Dill knocked in sophomore left fielder Jack Colton on a sacrifice groundout.

Brown bounced back with two runs in the next frame, scoring on a bases-loaded walk and then on a fielder’s choice.

Novak allowed three more runs in the top of the fourth inning, but Harvard senior second baseman Jeff Reynolds tied it up again with a ground-rule double to dead center field.

Sophomore captain Andrew Ferreira was impressive in relief, stifling the Bears’ bats for three innings of one-hit, no-run work to earn the win.

In need of a sweep, the Crimson will have to align the offensive power it showed on Saturday with solid defense and pitching when it faces the Big Green for two games at O’Donnell Field next Saturday and two in Hanover, N.H., next Sunday.