McGuiggan Continues To Impress at Plate 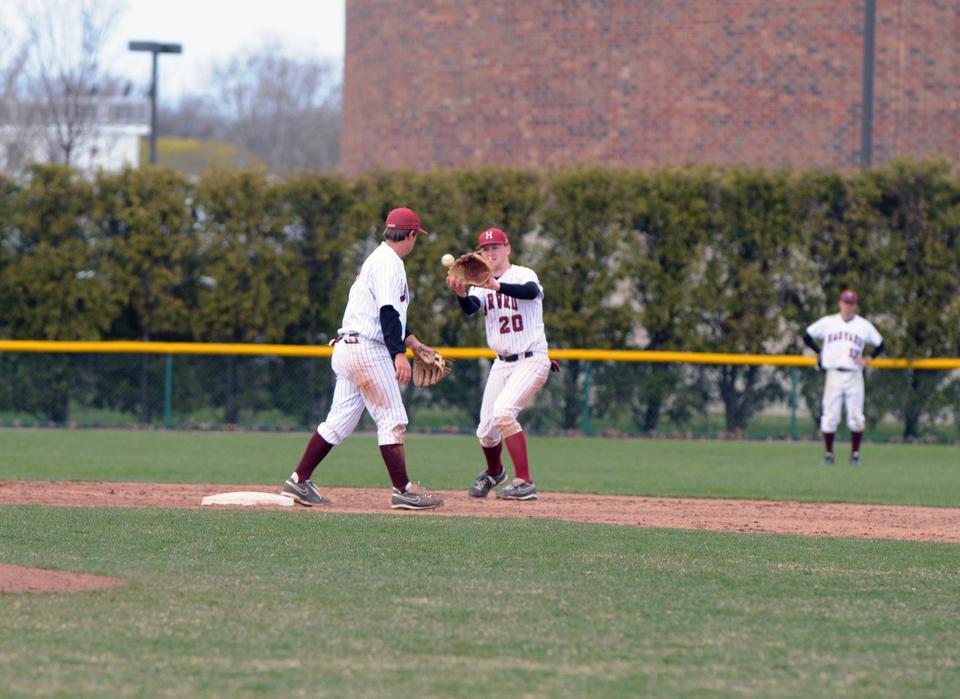 Sophomore shortstop Jake McGuiggan, shown here in earlier action, has been tearing it up at the plate lately. McGuiggan followed up his Ivy Player of the Week performance by going 7-for-14 last weekend.
By Taryn I. Kurcz, Crimson Staff Writer

Those who don’t believe in hot streaks should think again.

In the Harvard baseball team’s first of four games against Brown last weekend at O’Donnell Field, sophomore Jake McGuiggan stepped up to the plate in the bottom of the first inning. The Bears’ (8-29, 5-11 Ivy) Anthony Galan hurled a pitch towards home plate, and McGuiggan took a crack at it. The shortstop made solid contact and rocketed the ball over the left field fence, opening the weekend’s scoring with a homerun in his first at-bat.

The homer was just a preview of the hitting prowess McGuiggan showed in the three wins the Crimson (11-27, 7-9) took on Friday and Saturday. Over the weekend, the Hingham, Mass. native notched an impressive .500 batting average (7-for-14), including two doubles and the homerun, to go with two RBIs, while also crossing the plate himself at least once in each game his team won—twice in the first contest.

In fact, if you take away his poor performance in the fourth and final matchup of the weekend—a game in which almost the entire home team struggled—McGuiggan recorded a hit in seven of 10 at-bats, making his batting average over the first three games an astronomical .700.

“I think you can ask anybody else on our team, the hottest players in baseball right now are Matt Kemp who has like nine homeruns in the major leagues, Josh Hamilton who is like the best baseball player alive, and Jake McGuiggan,” junior third baseman Kyle Larrow said. “He is ridiculous right now. The kind of player he is, when he’s hot, anything that a pitcher throws in or around the strike zone, he’s going to hit it, and he’s going to hit it hard.”

But McGuiggan’s hits weren’t just impressive in number; they were timely, as well.

Each of the four times the sophomore got on base in Friday’s opening game—two hits in two at bats and two walks—Harvard scored either directly or indirectly through his efforts in the same inning.

In Friday’s second contest of the day, O’Donnell Field saw the two Ancient Eight teams tied at two going into the bottom of the eighth frame. With two outs and senior Jeff Reynolds on first, McGuiggan sent the ball into center field, advancing Reynolds to third and securing himself safely at first. Two batters later, sophomore Carlton Bailey cranked a hit into deep center field that sent both Reynolds and McGuiggan home, scoring what ended up being the game-winning runs.

Saturday’s first game was no different.

After already registering a double in an inning that scored two runs, McGuiggan came up to bat in the bottom of the fourth frame with his team down by one.

Reynolds was on third, and sophomore Jack Colton was on first. With an 0-2 count McGuiggan smacked the ball to right center field, driving in Reynolds and putting Colton and himself in scoring position. Reynolds’ run tied the game before senior Marcus Way won the game in the bottom of the last inning with a dramatic walk-off homerun.

“We call him ‘clutch’,” Bailey said. “Any time we really need a hit or need an inning started off, or if there are runners on the bases and we need them moved…. He typically is always in a position to do a job, and he rarely fails.”

Though the final contest of the weekend was not a successful one for McGuiggan—or Harvard for that matter—McGuiggan’s stellar performance against the Bears was not a fluke.

Last week the Ivy League named him Player of the Week for his exceptional play in Week Eight of the season. In six contests, he hit .458 (11-of-24) with three doubles, four runs, and four RBIs. The sophomore also stole two bases and had a .583 slugging percentage as the Crimson went 4-2 for the week.

McGuiggan’s Ivy League honor was the first weekly award a Harvard player had earned since 2010.

In the overall context of the season Harvard really needed McGuiggan’s skill at the plate last weekend. Going into the back-to-back doubleheaders against Brown, the Crimson knew it needed to win at least three games if it wanted to stay in contention for first place in the Rolfe Division of the Ivy League.

With the winner of the Rolfe Division still up for grabs, Harvard will need McGuiggan to step up again in the back-to-back doubleheader against Dartmouth this upcoming weekend.

“I’ve just been trying to stay feeling good,” McGuiggan said. “My swing has been feeling good the past few weeks, so hopefully I can continue for at least another weekend going against Dartmouth.”