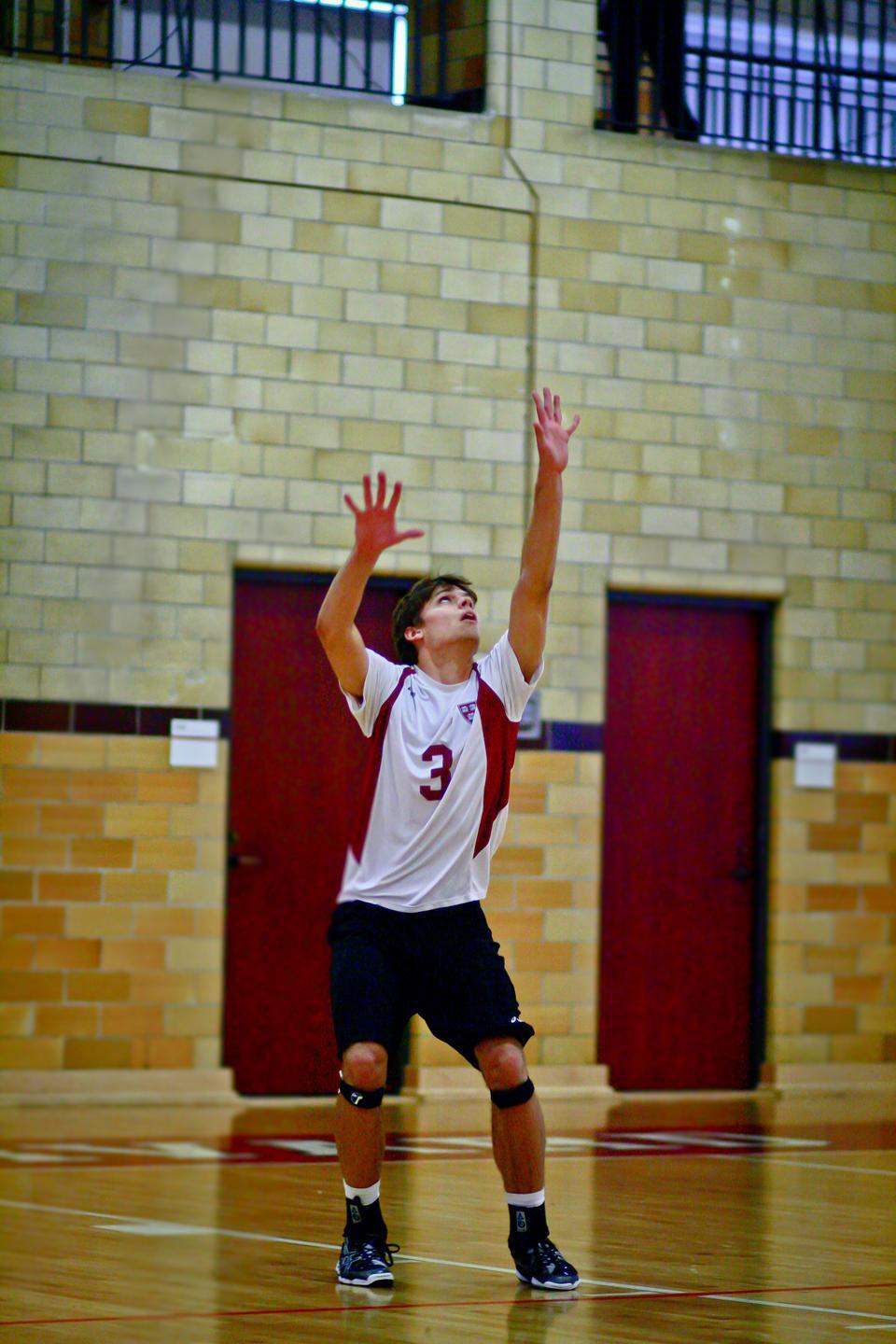 The Crimson defense, including freshman Will Chambers, shown above in earlier action, was unable to stop the George Mason attack on Thursday. Harvard fell to the Patriots in straight sets, which eliminated the squad from the Eastern Intercollegiate Volleyball Association Playoffs.
By Claire K. Dailey, Contributing Writer

The No. 2 seed Harvard men’s volleyball team entered its first-round match of the EIVA tournament against third-seeded George Mason with the hopes of winning a chance to compete for an NCAA tournament bid.

In its previous season matches against the Patriots, the Crimson (18-6, 10-4 EIVA) was 1-1, dropping the first game at home but coming back to win on George Mason’s own court. But Harvard was unable to tip the matchup in its favor, dropping the game, 3-0, to the Patriots (13-16, 8-6 EIVA).

Thursday night at the Recreation Building in University Park, Pa. left the Crimson with flashbacks of its first matchup against George Mason, which it lost, 3-0. Passing and momentum were the main problems that Harvard faced in both match ups.

“They were similar matches,” Harvard coach Brian Baise said. “They received our serve really well in both matches, and we didn’t receive theirs as well. They really had a rhythm going and we didn’t.”

With a No. 15 ranking in the American Volleyball Coaches Association, the Crimson entered the tournament after having received numerous honors. Coach Baise was named EIVA Coach of the Year. Senior outside hitter Matt Jones and freshman outside hitter DJ White were named to the EIVA all conference first team, and junior setter Rob Lothman was given EIVA All-Conference honors and named to the second team.

But all of these accolades recognizing Harvard’s best season in decades were not enough to serve as a rallying point. The Crimson was out-hit by the Patriots in the first two frames, even with Jones notching 14 kills. He was followed by sophomore opposite hitter Nick Madden, who finished with 11 hits of his own.

“They got a lot more swings on the ball,” Madden said. “We were giving them too many chances to get kills, and we weren’t getting enough stops.”

The biggest chance for turning the tide of the game in favor of Harvard came in the third frame, after it was already down two games to none. A pair of Crimson errors in attacking and serving brought the score to 11-5. But Madden provided a key slam that was succeeded by two kills from White.

“I think that if we would have brought the same fire that we had in the third game in the first [two games], we would have won today.” Madden said.

This fire was set by a key kill from Jones that brought the score to 21-17. The senior continued the surge in momentum continued with another crosscourt slam, followed by a block by himself and sophomore opposite hitter Michael Owen.

The Crimson came within one point of George Mason with a service ace from Jones that caused a Patriot timeout. Madden answered for Harvard with a kill, causing George Mason to call for another break in the game.

Jones gave the Patriots a 24-22 advantage with a service error. The Crimson held on for one more block from Owen and Madden. But the pair could not produce a repeat when George Mason’s Andrew Dentler ended the frame and match with a kill, 25-23.

“We started to play a little better at the end of the third game,” Baise said. “We started to get some blocks, and we made some good plays. We got within one at the end, but it was just a little too late.”

The first two frames of the game saw Harvard struggling to find momentum. Three attack errors by Dentler allowed the Crimson to pull within one point around the middle of the first set. Harvard gave a final push at the end of the match with two kills from Jones and blocks from Owen, Jones, and Madden. White and Owen each contributed a hit, but the team was unable to recover and suffered a, 25-19, defeat.

“They had a couple of runs where they’d pull away, and we weren’t able to close the gap,” Madden said. “That’s the thing about George Mason; you can’t let them get up by more than one or two points.”

The second frame had more back-and-forth play. But soon, the Patriots were able to notch a couple of kills and a block that widened the point margin to six. The Crimson remained out of reach of the lead, and fell, 25-19.

“I think if we had a few more weapons on offense, [there] would have been a different result,” White said. “This bodes well for next season though. We’re going to come back healthy and strong.”