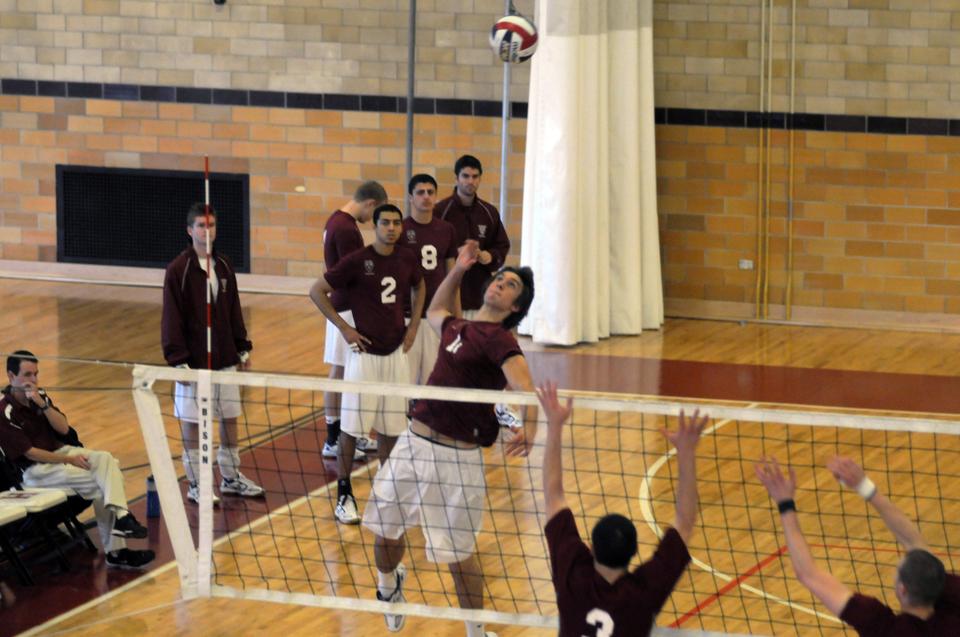 During the final home match of his collegiate career last Friday night, co-captain Matt Jones led the Harvard men’s volleyball team to a 3-0 victory against NJIT, recording 14 kills and four service aces. The senior currently heads the team with 262 kills and 318.5 points for the season.
By Peter G. Cornick, Crimson Staff Writer

Most years, Senior Night for the Harvard men’s volleyball team falls at the end of the season, after the playoff picture is settled and the celebration of the players takes the front seat over the scoreline.

But this season, the Crimson could  not afford to let anything come before the result on Saturday night, as the squad sits in second place in the EIVA rankings and still has a good playoff seeding to play for.

And in front of his friends and family, Matt Jones did what he has done for all four of his years at Harvard: score.

The co-captain tallied a team-high 14 kills in the Crimson’s 3-0 sweep over conference rival NJIT, as Harvard gained a two-game lead over third place St. Francis and kept pace with top-ranked No. 8 Penn State in the race towards the EIVA tournament.

And regardless of the Senior Night festivities, Jones said he always feeds off the Crimson crowd at the Malkin Athletic Center, believing the home fuels his performances.

“It’s always nice to have the crowd behind you, and on big points it really gets you going,” Jones said. “When you’re on the road, you have to build your momentum, and you know you’re doing well when the crowd is quiet. But that’s definitely not the same as when you’re at home…and the gym gets noisy and the other team gets rattled. It’s big.”

The outside hitter registered four service aces, six digs, and three blocks in Saturday’s win, building on his 15 kills and three service aces from the night before in Harvard’s 3-1 defeat of Rutgers-Newark.

It was during Jones’ service at the beginning of the fourth set against the Scarlet Raiders when Harvard jumped out to a large lead. The senior also delivered five kills in the final frame, preventing the Rutgers-Newark from ever denting the Crimson’s lead.

Jones has been a standout player for the team since his rookie season, when he played in all but one set. The La Jolla, Calif. native did one better his sophomore season, playing all 75 sets while leading the team with 4.50 kills per set.

“Matt will run down balls and overpower guys from an athletic standpoint,” said sophomore outside hitter Nick Madden. “He makes plays that a lot of volleyball players don’t expect.... Against good teams, you need guys like that, who are going to step up and make difficult plays happen when the game is close. He does that consistently.”

In his junior year, Jones and co-captain Dan Schreff took charge of a team filled with young talent. Under their leadership, the past two seasons have seen members of both 2014 and 2015, like Madden, take on major roles on the court.

“He’s very strategic in the way he thinks,” Madden said. “He’ll contemplate what he’s going to say before he says it, which is valuable in a captain because he doesn’t say things in a team context that he hasn’t put a lot of thought into. So when he talks, people listen.”

This season, Jones ranks third in the EIVA in both kills per set (3.74) and service aces per set (.47), keeping Harvard on pace for the second seed in the conference tournament, the winner of which will earn a berth to the NCAA Championship in May.

And as Jones ends his fourth year, so does Crimson coach Brian Baise, who began his career in the same 2009 season as Jones.

“The team is now the direct result of his recruiting,” Jones said of his coach. “This season is the culmination of all the work he has done, and I think he will continue to do those things in the future.”

Baise believes Jones has had a similar impact on today’s team.

“He’s been a great collaborator in building this program in the last four years,” Baise said. “He’s as competitive and committed athlete as I’ve ever coached.”

Baise believes Jones’ experience and poise will be crucial for the Crimson’s success down the final stretch of the season.

“Matt keeps us focused,” Baise said. “He makes sure that everyone is focused on the point we’re playing right at that moment…. I think his intensity and his focus are absolutely essential to these last four matches.”