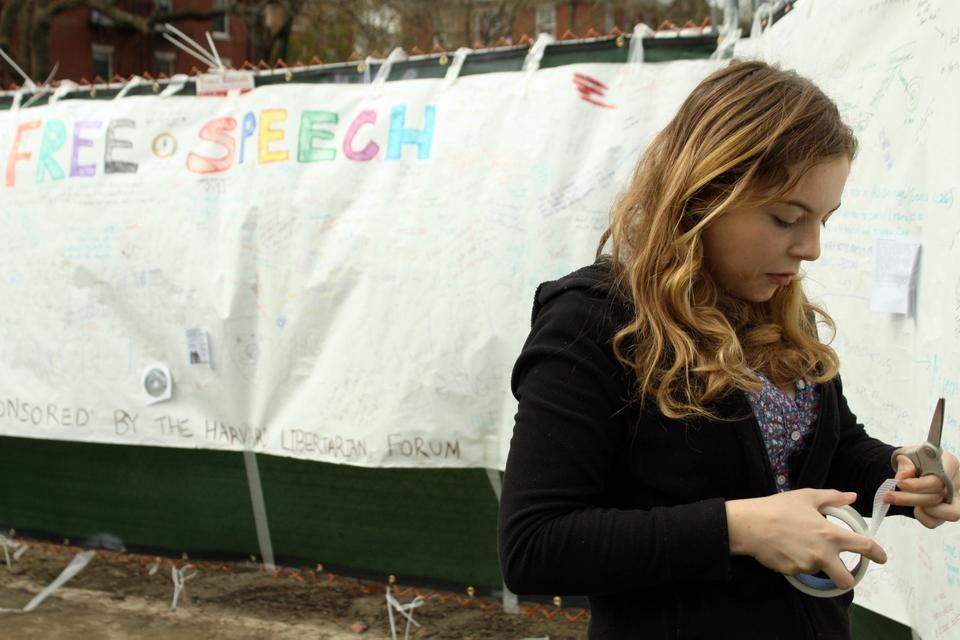 Corrine H. Curcie '15, a member of the Harvard Libertarian Forum, tapes up a portion of the "free speech banner" on the Science Center Plaza Thursday afternoon. The HLF, which sponsored the banner, hopes to draw attention to Harvard's free speech policies in light of the school's recent inclusion on the Foundation for Individual Rights in Education's annual "12 Worst Colleges for Free Speech" list.
By Henry A. Shull, Contributing Writer

As a part of the internationally-recognized Free Speech Week, the Harvard Libertarian Forum has built and maintained a free speech wall in front of the Science Center for this week.

Made of white paper taped onto a chain link fence, the wall features comments written by passers-by. The short messages include reflections on religion, academics, social life at Harvard, gender, and sexuality, as well as the occasional obscenity.

The wall is a statement against Harvard’s speech policies, “which state that you’re basically not allowed to say racist, sexist, classist, any other kinds of discriminatory things,” according to HLF member Corinne H. Curcie ’15, who organized the display. This system “is really not conducive to this type of learning environment,” she added.

Commenters even jested about the traditional limits of free speech. For example, one person wrote “Fire!!! (in a crowded theater).”

Curcie said that traditional censorship is not needed, because racist or libelous comments can be negated by further speech. Forcing people who make derogatory remarks to defend their opinions will expose the flaws of their beliefs, she added.

“That’s the epitome of what we’re trying to demonstrate,” she said. “You don’t need to cross things out. You need to reply to things.”

HLF Vice President Dana L. Modzelewski ’13 said that “one of the greatest ways that we’re controlled in our thoughts is how we’re allowed to express them.” The purpose of the wall, she added, is to return liberties to members of the community.

Karina Zannat, northeast regional director for SFL, said HFL’s effort is in line with SFL’s broader goals of advising and supporting student libertarian organizations. Zannat met Curcie at Harvard last fall and worked with her to organize this event.

The wall has been up since Monday, from 12 p.m. to 8 p.m. each day, and will be removed Friday night.