Freshman runner Ashley Collinsworth has learned about the challenges of being a college athlete from her father, Cris. 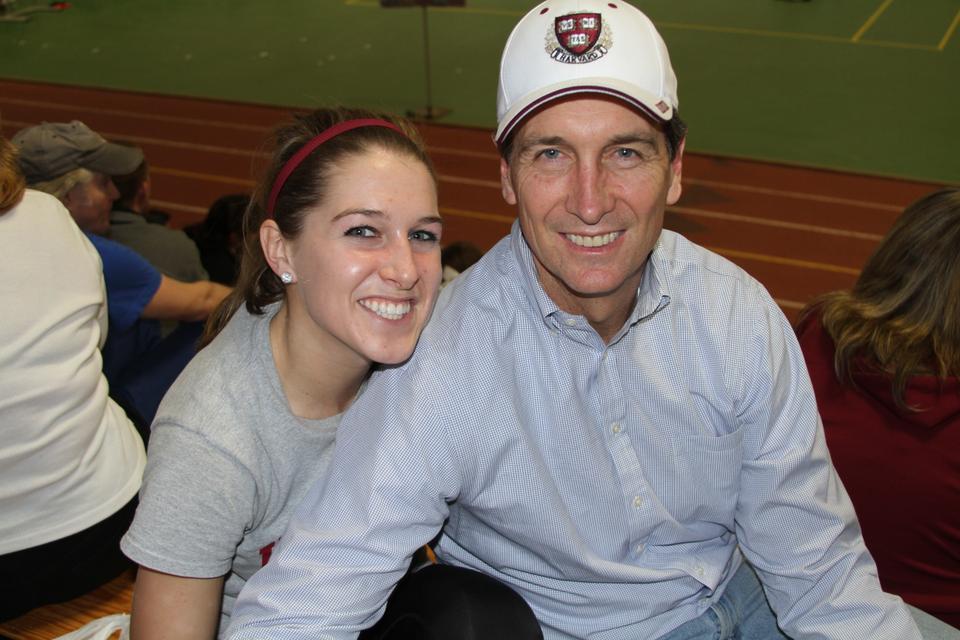 A damaged ankle suffered during the 1984 season voided a five-year contract he signed with the USFL’s Tampa Bay Bandits the following offseason because it made him uninsurable. A knee injury later forced the Pro Bowler to miss a combined 11 games during the 1987 and 1988 campaigns, which ultimately became the final two of his career because the ensuing structural damage left him unable to find a contract on the free agent market.

But this particular leg injury felt much worse, and it wasn’t even his.

This time, it had been suffered by his youngest daughter Ashley, who was lying on the ground in tears, holding her broken leg.

On a warm afternoon, she had tried, like her older brother Austin, to perform a trick on the tire swing in their backyard. But Austin, who now plays football at Notre Dame, had the physical ability to switch his body from one side to another without much trouble. Despite her best efforts to duplicate her brother’s talent, Ashley’s timing was off, and within seconds she was flying off the swing as her father watched in horror.

“That one I’ll never live down as long as I live,” Cris says. “She was just a little tiny peanut of a thing.... It was the worst parenting moment that I think I’ve ever had in my life.”

But despite Cris’ remorse as his daughter recovered over the following month, Ashley made sure her father didn’t feel any blame.

“All she did for the next five weeks was try to cheer me up,” Cris recalls. “She was still her bright, bubbly self as she sat there in her little pink cast and tried to make me feel better the whole time.”

Ashley’s leg fully healed, something that would later certainly become clear during an impressive high school track and field career that has continued at Harvard. But before taking up the sport, in her early years, Ashley instead put her legs—and her cheerful personality—to good use through her passion for dance, a hobby of hers since she was three years old.

“She would put on costumes and dance around the house,” Cris explains. “Whatever music was on, she was just one of those happy lights of a person. She entertained us all and just had a very vivacious, energetic personality that always seemed to brighten the room when she walked into it.”

As she grew up, Ashley used that effervescence to continue putting a smile on her father’s face—and even a tear in his eye.

“The big pouffy costumes, the hats that flowed in every way that make a dad cry, and then when the dance recital day comes around and they play the sweet little ballet numbers, and those three, four, five year olds are up there looking like beautiful ballerinas—that’s what I’ll remember most from those early days,” Cris says.

Meanwhile, though her father became increasingly well-known as a NFL commentator—a career path he took up soon after his playing days came to an end—Ashley says that fact didn’t make her childhood any different than that of her friends.

As she moved into her teenage years, Ashley continued to follow her passion for dance, later becoming captain of the Highlands High School team as a senior. But upon arriving at the school, she decided to put her talented legs to a new test by joining the track and field squad.

“All my friends were doing it,” says Ashley, who played on Highland’s soccer team as well. “It was just another fun sport to do.”

Ashley certainly had the genes to be successful in her new endeavor, as Cris had been considered one of the fastest receivers in the NFL during his playing days. He was so quick that on March 5, 1983, the Bengal attempted to race a horse, Mr. Hurry, in front of a large crowd at Latonia Race Course in Ohio.

The match ended up not being much of a contest—the horse won by a wide margin—but a quarter-century later Collinsworth decided to relive his passion for running by serving as the coach of Ashley’s high school track and field team in their hometown of Fort Thomas, Ky.

“I did it really just to be around her,” Cris explains. “Obviously I was traveling and [announcing] games during the season; all I wanted to do was just hang around the kids.”

The former athlete says he didn’t take his job too seriously, often goofing around in an attempt to make practices more fun.

“I would always run behind [the team] and sing that song, ‘Apple Bottom Jeans,’” Collinsworth—referring to T-Pain’s “Get Low”—recalls with a laugh. “I could do a couple verses of that.... They hated it because I can’t sing at all, and I certainly can’t sing one of their songs from their era. The more I would sing, the faster they would run. I think it directly led to four straight championships because they certainly did not want to hear me singing ‘Apple Bottom Jeans.’”

But the other Collinsworth also played a major role in sparking those consecutive state titles.

A Cincinnati Enquirer first team all-state standout as a junior and senior, Ashley won her team’s MVP and Most Valuable Sprinter awards and received the National Guard Best and Brightest Track Athlete honor as well. Like her father, Ashley ran with seemingly equine speed, winning two straight individual championships and setting the school record in the hundred-meter dash.

“She had shown some signs of being a great athlete, of being very competitive,” Crimson coach Jason Saretsky says. “Meeting her on her recruiting trip, it was fairly clear what kind of mentality she would be bringing to our program, and we were very excited to add her to our team.”

Upon arriving at Harvard, Ashley immediately impressed, qualifying first in the 60-meter dash with the sixth-fastest time in school history before finishing third in that event and fifth in the 200-meter dash at December’s Harvard Open.

“She’s had some real flashes of brilliance,” Saretsky says. “We’ve seen that competitive drive and tenacity that we saw in prefrosh at various points during her freshman year.”

Thus far, the rookie has enjoyed being a part of a college squad.

“It’s been a great experience,” Ashley explains. “My best friends have come from the team. You have to learn to balance the schedule and everything, but once you do, it’s worth it.”

And Cris has been greatly impressed by her ability to succeed at that very task.

“I don’t think anybody could understand what its like to be an athlete at Harvard University,” says Cris, who was a first team Academic All-American himself at the University of Florida in 1980. “These brilliant young people are accomplishing so much in the library and in the classroom and in the chemistry labs, and to take a four-hour chunk out of every day to run around the track and then to compete at the high academic level that is Harvard University is a remarkable accomplishment.”

Indeed, it is often Ashley’s academic achievements, more so than her athletic ones, that stand out to the former football star.

“I’ve told her repeatedly that she’s taken my gene pool to a whole new level—there’s nothing in her genetic makeup on my side that would point to Harvard University,” he says, laughing. “There is nothing that anybody could do to make me any prouder of my daughter than what she’s accomplishing at Harvard.”

Cris is certainly not shy about that pride, never hesitating to drop the H-Bomb when he has the chance.

“I’ve actually made a science out of how to brag about my daughter,” he explains. “I’ve forced people—they’ll say, ‘tell me about your kids.’ I’ll reply, ‘I’ve got a son in South Bend, a daughter in Gainesville, and another daughter in Boston.’ South Bend they know is Notre Dame, Gainesville they know is Florida. Boston forces them to ask the next question: ‘Where in Boston?’ ‘Harvard’ always forces them to fall on the ground and say, ‘What?’”

“As a parent you just relish the moment,” he adds with a laugh. “The only thing that could make it better is if she would stay at Harvard for thirty years so I could do that for the rest of my life.”

Indeed, as Ashley has progressed through her freshman year, the former football star continues to be amazed by his daughter’s achievements.

“I think [the team] got back at two or three in the morning from the Hep Championships this past weekend,” he says. “Half the girls and guys had finals at eight or nine in the morning the next day. I’m certainly not demeaning the accomplishments of the other kids there, but to be able to do that—to study on a bus for seven hours driving to Philadelphia, to study on a bus for seven hours coming back, to get four to five hours of sleep and then take a final at Harvard University—to me is a remarkable accomplishment.”

“I’m sure every parent of Harvard students feels the same way,” he adds. “It’s playing in the Super Bowl, it’s being part of the Olympics, it’s achieving at the highest level in the world at the academic stage.”

And Cris, who played in two Super Bowls himself, certainly knows a thing or two about that very level. After serving as the Gators team captain and earning first-team All-American honors in 1980, Cris was a second-round pick of the Bengals in the following year’s NFL Draft. A 6’5” wideout, Collinsworth appeared on the cover of “Sports Illustrated” as a rookie, was named to three Pro Bowls, and surpassed 1,000 receiving yards four times during his eight year career.

Once his playing days had come to an end, Collinsworth became one of the NFL’s best-known commentators. Since 1989, he has served as an analyst for HBO’s (now Showtime’s) successful “Inside the NFL” and is also presently the color commentator on NBC’s “Sunday Night Football” and in the popular “Madden” video games. For his performances on those programs and others, Collinsworth won one of the two “Outstanding Sports Personality” Emmy Awards in 1997, 1998, and every year from 2002 to 2012 (for a record total of 13).

Though she’s not a huge football fan, Ashley admits she will sometimes tune in on Sunday nights just to hear her father’s voice.

Cris likewise feels the same way about his daughter.

For her ability to meet that standard, Cris Collinsworth—despite earnings honors ranging from Pro Bowl appearances to Emmy Awards—thus believes his daughter Ashley is his greatest accomplishment.

“To me there’s no level of pride anybody could have in their child that would exceed mine,” he says. “She set that bar as high as it could be set.”