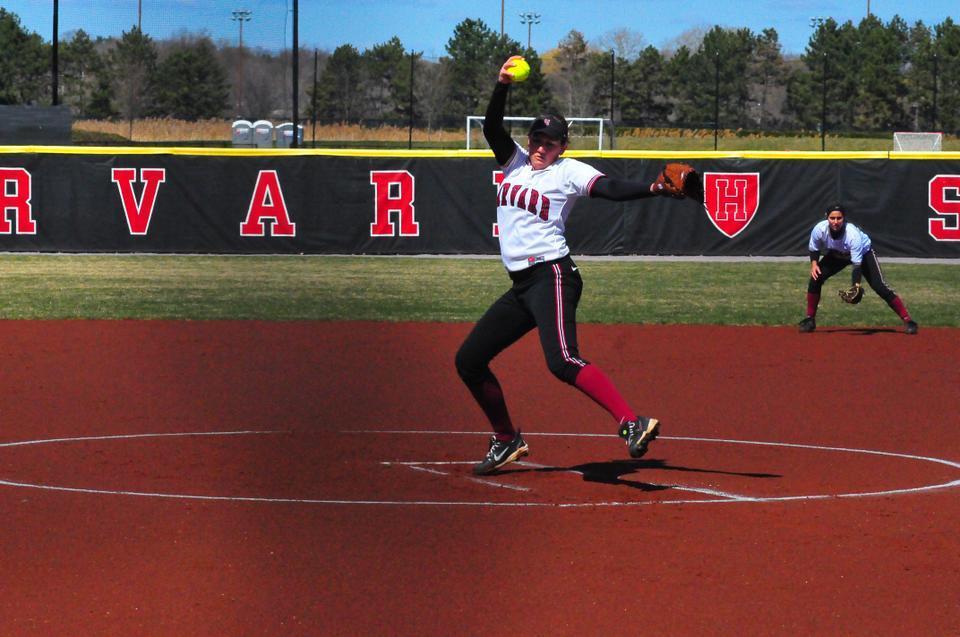 The Harvard softball team’s wild three-day NCAA tournament run came to an end Sunday at the hands of 16th-seeded Washington. The No. 18 Huskies (39-17, 7-15 Pac-12) shut out the Crimson, 4-0, giving the Ivy champ its second loss in the double elimination tournament.

The Crimson offense provided enough run support to get the Harvard (35-15, 17-3 Ivy) past two elimination games Saturday but then returned to dormancy Sunday. Two days after being blanked by Washington’s Kaitlin Inglesby, the Crimson bats were kept silent by the Huskies’ Bryanna Walker Sunday. Walker held Harvard to four hits in a complete game effort. The Crimson got runners in scoring position with doubles in the third and sixth innings, but both times came up empty.

“They threw a totally different pitcher we hadn’t seen, and she was really effective,” Harvard coach Jenny Allard said. “We had isolated quality at-bats, but we couldn’t string hits together.”

Despite the lack of offensive support, co-captain Rachel Brown continued to battle for the third straight day, registering her fourth complete game over that time span. Though she completed the feat of durability and stamina, Brown wasn’t as successful Sunday.

“She was definitely really fatigued, so you didn’t see a lot of strikeouts,” Allard said. “But because her off-speed stuff is so effective and Washington was such a strong lineup, we needed her changeup in the mix today.”

In the top of the first inning, Brown surrendered her first run in 10 innings on a single by Inglesby. The base hit drove in leadoff hitter Victoria Hayward, who had stolen second after getting on due to a fielding error by senior Jane Alexander.

Eventually, Brown got out of the inning, but more damage would come just around the corner.

A single and a walk came back to bite Brown in the fourth frame when Nikia Williams homered to stretch the Washington lead to 4-0.

“As riseball pitchers get tired, more home runs are likely to happen,” Brown said. “It was a good pitch. The hitter who hit it is on the national team. She’s a very good hitter.”

Following the home run, Brown was her dominant self, holding the Huskies scoreless for the final three innings.

“She was a champion for us,” Allard said. She was a leader in the circle; she kept the opponents at bay. This year she was just so much stronger.”

Still, it was not enough, as Harvard’s season came to an end after Alexander went down swinging, leaving co-captain Whitney Shaw stranded on first.

Even with the disappointing finish, the Crimson’s performance in the 2012 NCAA Tournament set a new standard for Ivy softball teams of the 21st century. It had been seven years since an Ancient Eight team won a tournament game, but Harvard—ranked 100th coming into the tournament—managed to get two victories over No. 23 Texas Tech and No. 50 Maryland.

“It’s historic,” Allard said. “I’ve coached here 18 years, and we’ve never made it to the Regional Final. We entered the tournament as a 4 seed [in the region] and ended in the final. It shows how hard the players worked and how confident they were against really top-caliber teams.”

With their victory over the Crimson, the Huskies advance to the Super Regional for a best-of-three series with a spot in the eight-team Women’s College World Series on the line. Harvard, on the other hand, will return to Cambridge looking to regroup and prepare to fight for a third straight Ivy League title in 2013.

“I think the experience of winning a championship and going to regionals and having that experience moving forward is great for our underclassmen to know what it means to compete at that level,” Allard said.

Next year, the team will have to compete without the service of Brown, a two-time Ivy League Pitcher of the Year, and Alexander, who broke out this year and was rewarded with a co-Ivy Player of the Year honor.

“We’ve been incredibly lucky to be a part of Harvard softball,” Brown said. “Hopefully we left it better than we found it.”