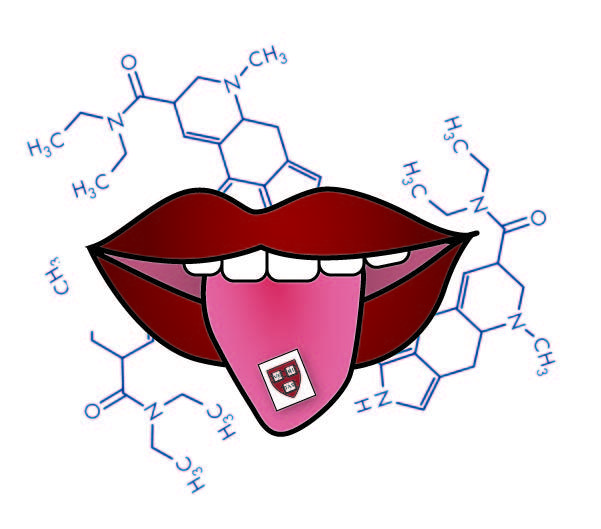 Sitting in Winthrop dining hall with a few classmates in the fall of 1959, Allan Y. Cohen ’61 pondered what courses to take the next semester. Conversation gradually shifted to a supposedly easy course on motivation.

Someone asked who the professor of the course was.

“I am,” emerged a voice from the end of the table, Cohen remembered. To his surprise, seated a few chairs away was Richard Alpert, now known as Ram Dass, who was the instructor of the course on motivation and an associate professor studying personality and social psychology. Despite this unusual first encounter, Cohen enrolled in Dass’ course, a decision that led to a friendship with the professor.

Dass and his research partner Timothy F. Leary—who would later be described by President Richard M. Nixon as “the most dangerous man in America”—would take Cohen on a trip he would never forget.

By administering hallucinogenic drugs such as LSD and psilocybin to Cohen and Harvard students in the Harvard Psilocybin Project, Dass and Leary generated discord among faculty and students and propelled Harvard to the center of national media attention when details of the ongoing project were exposed in the spring of 1962.

While psilocybin, LSD, and other hallucinogenic drugs are illegal today, these substances were legally available in the summer of 1960, when Leary first tried psilocybin during a fateful trip to Mexico with his family. Psilocybin, a naturally-occurring substance found in more than 200 species of mushrooms, transforms an individual’s mental state, triggering reactions that range from euphoria to paranoia. Right away, the young Harvard lecturer was impressed with the potential psychological and scientific implications of the drug.

“He was completely blown away,” said Don Lattin, author of a 2010 book which traces the progression and impact of Leary and Dass’ experimentation. “He came back to Harvard with this idea that psychedelic drugs could provide insights into mental illness.”

His interest was not unusual. According to Lattin, LSD and other hallucinogenic drugs began attracting academic attention in the 1950s, when scientists started to research the potential applications of the drugs in psychotherapy and treatment of mental disorders. But public consumption of the drugs remained low into the early 1960s.

“Most people had never heard of LSD [and other drugs],” Lattin said. “Marijuana was considered a much more dangerous, illegal drug.”

Intrigued by the power of these mind-altering substances, Leary joined forces with Dass and other Harvard researchers to investigate the effects of psilocybin.

“[Leary] had kind of grandiose ideas,” said Professor Herbert C. Kelman, who taught with Leary and Dass in the Department of Social Relations, Harvard’s former multidisciplinary blend of psychology, anthropology, and sociology. “He was an odd character to begin with.”

Cohen, who eventually entered Harvard’s clinical psychology graduate program in 1961, said that he knew both men “very well” and described the researchers as “extremely enthusiastic” about their scientific endeavors.

“[Dass was] a smart, young, quantitative psychologist,” Cohen said, adding that Dass served as his functioning academic adviser for the remainder of his undergraduate career.

With support from Harvard’s Center for Research in Personality, the Harvard Psilocybin Project began in 1960 and entailed a range of studies, including investigations into the ability of the drug to stimulate religious states in seminary school students and to alter the criminal behavior of prisoners.

Seeking to explore the impact of setting and environmental stimulants on an individual’s response to psilocybin, Leary and Dass launched a campus-centered study of hallucinogens in 1961. Under strict University guidelines, they were only allowed to give the psychedelic drugs to graduate students. They attracted subjects from a required introductory clinical psychology class, which they co-taught, and also found volunteers from the local artistic community, including Allen Ginsberg and Aldous Huxley.

“I was one of the students who was very impressed by the experiment,” said Cohen, who volunteered to participate and called his psychedelic forays “dangerous enough to be even more exciting.”

Starting in the fall semester of 1961, Leary and Dass administered psilocybin to the participants, later following up with them and discussing their experiences. Over time, the researchers tweaked the participants’ environments by adding music and art to observe different reactions and gradually shifted from psilocybin to LSD and mescaline as the drugs of choice.

“It was absolutely exploration, investigation, and understanding,” Cohen said about the qualitative, flexible nature of the experiments.

“Part of the enthusiasm was that this was a new discovery in the theory of consciousness,” he added. “There was a revelatory aspect that had almost a spiritual character to it.”

A group of participants, along with Leary and Dass, even went to Mexico to continue expanding their understanding of psilocybin.

Often, Leary and Dass blurred the boundaries between researchers and their subjects, Lattin said.

“They tripped together,” he said. “This was more controversial than [the use of the drugs].”

Moreover, Leary and Dass began involving undergraduates in their experiments as well, despite the University’s explicit prohibition.

“At first they were fairly cautious,” Lattin said. “They agreed to only graduate students. But [later], Richard Alpert brought in several undergraduates.”

“[This] is what got them into trouble,” he said.

‘PART OF THE RUMOR MILL’

By the spring of 1962, Leary and Dass’ radical study caught the attention of faculty members in the Department of Social Relations.

Kelman, their colleague in the department who had been abroad in Norway, discovered the nature of the experiments through his students.

“While I was away, I was getting letters from my students saying, ‘You won’t believe what is going on here with this drug business,’” he said. “This was totally unorthodox research, and there was a kind of cavalier attitude about the research that felt inappropriate.”

“They were being strongly urged by the two instructors to participate in the drug sessions,” Kelman said a student told him. “He said out of the 12 students in the class, only he and one other student refused to participate.”

“That’s what made me realize how much it had become legitimized,” he added. “I don’t think this was serious research, frankly, and I think it was an abuse of the authority and power of the faculty members over students.”

According to Kelman, some senior faculty members worried that interfering with the experiment would endanger “academic freedom.” Yet other junior faculty members shared Kelman’s concerns, and some worried about the safety of the experiment. This prompted a dramatic face-off in March 1962 between Leary, Dass, Kelman, and Department of Social Relations Chair David C. McClelland, who served as head of the center that sponsored Leary and Dass’ experiment.

“We had misgivings about the educational implications of what was happening,” Kelman said. “It went against the academic values that we tried to promote in our graduate training.”

In response, Leary and Dass continued to defend their experiments, arguing that they could maintain the safety of their experiments by having a physician on call and asserting the value of research into mind-altering drugs.

Meanwhile, amid this faculty resistance, most of the student participants sustained their involvement in the experiment.

“Many of us felt pressure to perform well, given the criticism of our enthusiasm for this research,” Cohen wrote in an email. “Many of us assumed that faculty and others believed that the drugs would interfere with our academic performance. We wished to prove them wrong.”

“Out of all the drug experimenters of the era, we probably studied the most,” he said.

According to Kelman, the initial faculty meeting discussing the fate of the research attracted “all kinds of people,” even those not involved in the experiment.

“This had become part of the rumor mill of the community,” he said.

Following coverage by The Crimson, other newspapers such as The Boston Globe began reporting on the scandal, escalating tensions and bringing the issue to the attention of University President Nathan M. Pusey ’28. Furthermore, official agencies such as the Massachusetts Department of Public Health began investigating the dangers and validity of Leary and Dass’ experiment.

“It wasn’t a secret that this was going on,” Lattin said.

Ultimately, both Leary and Dass left Harvard following the scandal generated by their experiments.

Leary left Harvard shortly after the March 1962 faculty meeting, when University administrators decided not to renew his contract because he did not appear for his lectures. Later, he would say that he was fired by Pusey.

“At that point, [Leary] didn’t much care,” Cohen said. “He was pretty involved in the psychedelic movement.”

Leary rose to national prominence in the 1960s counterculture movement due to his experience and support of psychedelic drug use, defending his use of drugs before the Supreme Court, popularizing the phrase “turn on, tune in, drop out,” and even collaborating with The Beatles.

“[Leary] was a cultural icon. His influence was enormous,” Lattin said. “He was certainly a man on a crusade.”

On the other hand, Dass left Harvard in 1963, news of which was displayed on the front page of The New York Times. He continued psychedelic research until 1967, when he left for an inspiring trip to India that led him to a path of eastern philosophy and spirituality and to his eventual name change. According to Weil, this front-page appearance may have marked “one of the first times people in the country heard about LSD.”

He said the experiment contributed to bringing hallucinogenic drugs into the national consciousness.

Yet while their investigation magnified public awareness and use of hallucinogenic drugs, the controversial experiments also stunted future scientific research into psychedelic medicine.

“Leary’s last legacy was that he set back periods of research,” Lattin said. “He launched such a crusade that science suffered.”

Within a few years, research with and use of hallucinogenic drugs such as psilocybin and LSD became illegal.

“It pushed people’s buttons and made it hard for people to research these drugs,” said Weil.

The resistance lasted into the 1990s, but recent years have seen a resurgence of research in these areas.

“It’s taken years for people to be looking at the positive effects of drugs again,” said Weil.

Fifty years removed from the controversy, Cohen said that he believes his chance encounter with Dass was ultimately beneficial.

“Almost all of us would say yes, that was a...set of experiments that changed our lives, and maybe for the better,” Cohen said.

Cohen, who now holds a Ph.D in clinical psychology, specializes in substance abuse prevention research and practice. Co-founder of the Pacific Institute for Research & Evaluation, one of the nation’s largest nonprofit research institutes on drug abuse prevention, Cohen noted that although the experiments did indeed influence his career path, they did so “ironically in the opposite direction.”

“You get high, but you always come down,” he said.

—Staff writer Cynthia W. Shih can be reached at cshih@college.harvard.edu.