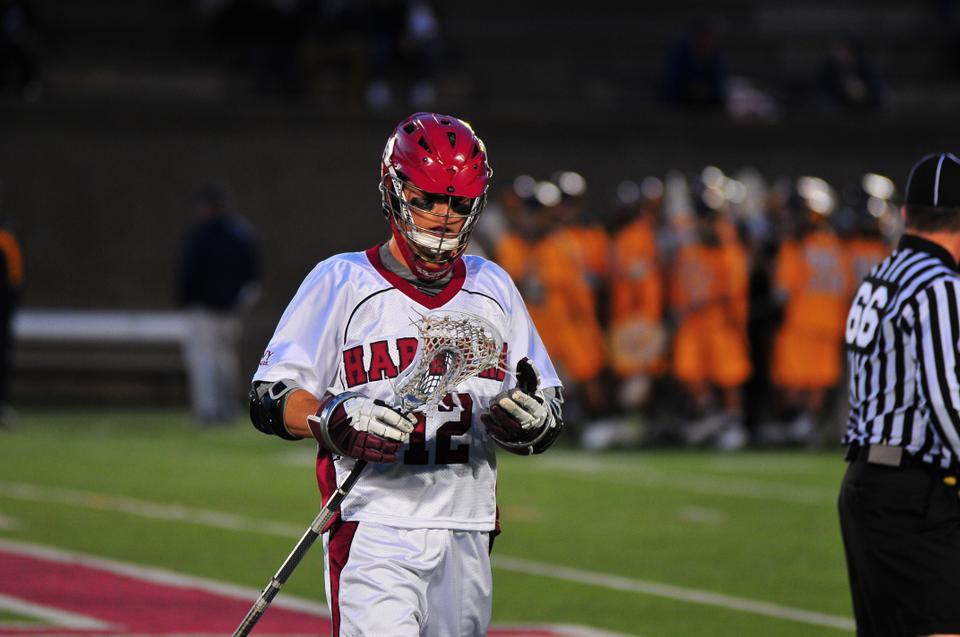 Tri-captain attackman Kevin Vaughan, pictured above, and the Harvard men’s lacrosse team failed to earn a berth to this year’s Ivy League Tournament due to three straight losses to end the regular season.
By James M. Acer, Crimson Staff Writer

It was a disappointing end to a season in which the Harvard men’s lacrosse team never gained the momentum it had hoped for. After dropping its first two chances to clinch a spot in the Ivy League Tournament with losses against Penn and Princeton, the Crimson had one last opportunity in its regular-season finale at Yale.

But the Bulldogs prevailed in a closely contested game, and, just like that, Harvard’s season was done. It was a disappointing finish for a team that held preseason aspirations of competing in the NCAA Tournament in late May.

Despite returning 10 of 11 starters from a 10-6 squad in 2011 and bringing in what was regarded as potentially the best Ivy League recruiting class in a decade, the Crimson found itself on the losing end of multiple closely fought games. Four of the team’s eight losses, including its final loss to Yale, came by two goals or fewer.

After a promising 2-0 start to Ivy-League play, Harvard stumbled and was unable to find a win in any of its final four league contests. The most frustrating of those games may have been a mid-April, two-goal loss to Penn, a squad that, at the time, had just one win on the year.

But it was not a season without highlights. Senior attackman Jeff Cohen, the nation’s second-ranked goal scorer at just under 3.5 per game, recorded the seventh best scoring season in Harvard history en route to becoming the Crimson’s all-time leader in career goals, finishing  his four-year career with 142 tallies.

Cohen was recently named to the All-Ivy First Team, as was tri-captain Kevin Vaughan. Vaughan, who was drafted in the second round (14th overall) of the Major League Lacrosse draft earlier this year, finished his senior campaign as the squad’s second leading scorer, tallying 17 goals and a team-best 19 assists.

Sophomore attackman Daniel Eipp, whose 24 goals this season were second only to Cohen, also earned postseason acknowledgement with a spot on the All-Ivy Second Team.

After beginning the year ranked as high as 14th in the nation, Harvard cruised to wins against Vermont in its season opener and at Holy Cross three days later.

But the Crimson came up short in each of its next three non-conference games. Harvard failed to exact revenge against a Hofstra team that defeated it in 2011, as the squad fell again, 7-6. The final deficit was the same in Harvard’s next game at Georgetown, with the Hoyas dropping the Crimson to 2-2 overall. A matchup with perennial power Duke went no better, as Harvard lost by three goals and found itself below .500 heading into Ivy play.

A thrilling overtime win against Brown at home put the Crimson back on track. Harvard coasted to a 15-10 win over Dartmouth at home the following week to stay undefeated in the Ivy League.

Harvard was brought back down to earth in a 16-8 loss to at the hands of then-No. 2/3 UMass, but bounced back resoundingly with a convincing win over Michigan four days later.

Standing at 5-4, the Crimson travelled to Cornell for what many players had tabbed as the team’s biggest game of the year. But Harvard was unable to avenge its defeat in the 2011 Ivy League Championship game as Cornell cruised to a 14-10 win.

The Crimson bounced back three days later with an 18-4 thumping of Quinnipiac, and stood at 6-5 heading into its final three games, all Ivy contests. A win in any one would have guaranteed Harvard a postseason spot, but the efforts of Penn, Princeton, and Yale proved more than the Crimson could overcome.

“We’re obviously not satisfied with the final record,” Harvard coach Chris Wojcik ’96 said after his team’s final game, “but the amount of work and effort from these guys has been tremendous, and it’s something to be proud of.”

The Crimson seemed to play better in the comfort of familiar surroundings this year, dropping only two of its seven contests at home. On the flip side, Harvard struggled on the road, its only win coming at Holy Cross early in the season.

Neither the offense nor the defense was especially prolific from a statistical standpoint. The Cohen-led offense finished among the nation’s top 25 at 10.36 goals per game. The defense, anchored by tri-captain Paul Pate, lost a key piece when MLL-draftee senior Daniel DiMaria suffered a season-ending injury early in the year and finished in the middle of the pack nationally, allowing an average of just under 9.8 goals per contest.

Harvard will be hit hard by graduation this spring. Besides losing its top two scorers in Cohen and Vaughan, it will be forced to replace Pate and fellow tri-captian Terry White.

“It’s interesting,” Cohen says. “You spend such a small portion of time playing in actual games. Most of my memories will be of the hard work with my teammates, the great times we had on and off the field.”