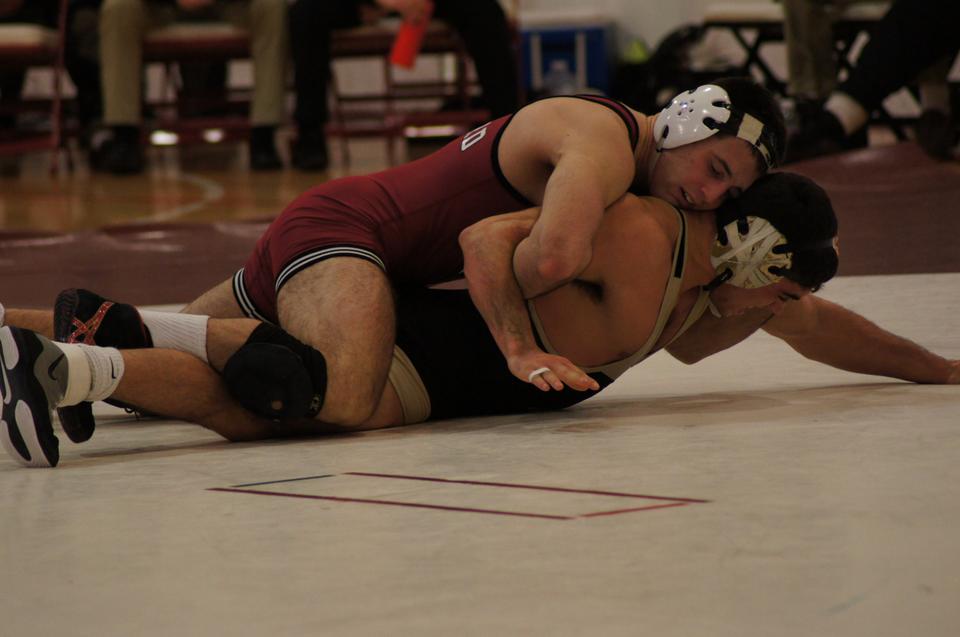 After earning a national ranking as high as No. 4, junior co-captain Walter Peppelman finished eigth at the NCAA tournament in March. Peppelman finished the season with a 29-7 record in the 157-pound weight class, bringing his career win total to 92. Peppelman also recorded 11 falls, a team high.
By Taryn I. Kurcz, Crimson Staff Writer

Coming off of a year that had very few individual or team victories, the Harvard wrestling team (5-10, 1-4 Ivy) performed considerably better in 2011-12, sending four grapplers to the NCAA tournament—the most since 2007—and posting its best head-to-head record since the 2008-09 season.

Junior co-captain Walter Peppelman, who had a national ranking as high as No. 4 during the year at 157 pounds, and junior Steven Keith, who ranked as high as No. 9 during the regular season in the 133-pound weight class, led the Crimson on the mat, both placing eighth at the NCAA tournament.

The eighth-place finishes earned the two juniors All-American status and marked the first time two Crimson teammates made the podium at the NCAA tournament since J. P. O’Connor ’10, Louis Caputo ’09-’10, and Max Meltzer ’07 did so in 2007.

Also competing in the NCAA tournament were co-captain Corey Jantzen and freshman James Fox. Jantzen, who played with an injured shoulder, began his final NCAA bout with a 10-8 decision over Cam Tessari of Ohio State at 149 pounds. While Tessari went on to finish fourth, Jantzen dropped his next two matches against the No. 7- and No. 4-ranked opponents to end his college career.

“Corey is one of the hardest workers I’ve ever met,” Keith says. “Unfortunately, he fell short of his goals, but he was a huge impact to the team and really carried guys through and really pushed people to their limits to make them the best wrestlers they could be.”

“It’s heartbreaking to see him go out the way he did,” Peppelman adds. “But with an injury-plagued career, he made the best of what he had.”

Fox, Harvard’s final wrestler in the tournament, did not win a match in the 197-pound class, but his two close matches seemed to prove him worthy of his at-large bid. Unranked, he dropped a 12-8 decision against the No. 8 seed before falling, 4-1, in the first round of Wrestlebacks. According to his teammates, the freshman also set a strong example for the Crimson’s future rookie grapplers.

“Fox kind of paved the way for the other freshmen, proving that even though it’s your first year in college wrestling, you can have a great season,” Keith says.

NCAAs were not the first time Harvard wrestlers had performed well in tournament matches. To start the year, the Crimson had six on the podium at the Binghamton Open. Sophomore Paul Liguori paced Harvard, finishing second in the 149-pound class, while Peppelman and Keith both finished third. Fox and sophomore Cameron Croy (184 pounds) each gained fourth-place honors, while freshman David Ng placed sixth in the heavyweights.

The Keystone Classic was one of the Crimson’s most successful bouts all year. Peppelman won a tournament for the first time in his college career, Keith and Croy earned silver, Fox took bronze, and Liguori and Ng both placed fifth. Freshman Joe Barbato, in one of his few competitions of the season, rounded out Harvard’s performance by taking sixth place at 125 pounds. As a team, the Crimson placed fifth—its best team finish all year.

While the next tournament—the Cliff Keen Las Vegas Invitational—saw Peppelman go down with a knee injury that would keep him out for a few weeks, Keith placed third and Fox took seventh in their respective weight classes.

“I think that the tournament in Vegas in December…really proved to me that I belonged on the podium at the NCAA tournament,” Keith says.

Keith continued his winning ways at Harvard’s final tournament until the EIWAs at the end of the spring, finishing eighth at the Midlands Championships. Though other Crimson grapplers won a few matches, Keith was the only one to earn a medal.

The beginning of Harvard’s 15 dual meets in the spring looked promising. In its opening match against Rider, the Crimson registered four decisions, a major decision, and a fall en route to a 22-15 victory.

Though Harvard lost, 33-12, later that afternoon against Rutgers, the Crimson showed promise that day. Having to take the fall semester off due to injury, Jantzen returned to the mat full-force, pulling an upset against previously unbeaten and No. 3-ranked Mario Mason of Rutgers. Peppelman, meanwhile, pinned his two opponents, adding to his current career total of 27 falls that ranks him third all-time in Harvard’s history.

The Crimson went on to only win four more team matches—including a 43-0 shutout against Millersville—but still managed to merit a No. 22 national ranking before heading to the EIWA Championships.

There, then-No. 6 Peppelman and then-No. 12 Keith recorded their best EIWA performances yet, finishing second and third in their weight classes, respectively, automatically qualifying them for the NCAA tournament.

Then-No. 5 Jantzen recorded a major decision and fall at 0:36—guaranteeing him sixth place and an automatic bid to the NCAA tournament—before dropping out due to a medical forfeit. In their respective weight classes, Croy finished sixth and Fox placed seventh, putting them in positions to earn at-large bids to the NCAA Championships, though only Fox ended up getting the call.

“We’re a great team; we’re a great family,” Peppelman says. “I’m really proud of what we’ve done and what we’ve accomplished, from having the second-best GPA in the country this year to organizing and coming together on National Coming Out Day to putting four guys in the national tournament. I think overall we had a really productive season, both on and off the mat.”