Campbell To Vie for Spot on Olympic Squad 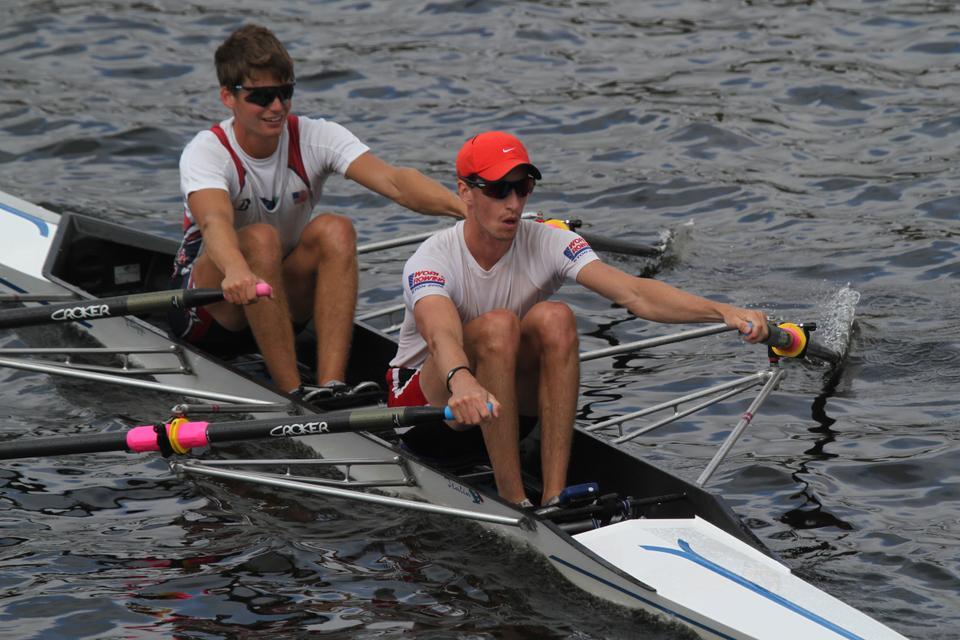 After finishing in the top five at both senior worlds and the U23 World Championships this past summer, Andrew Campbell ’14-15 teamed up with Boston University graduate Will Daly to compete as a lightweight double. The duo will race in Lucerne, Switzerland for a trip to the Olympics.
By Christina C. Mcclintock, Crimson Staff Writer

With a bronze medal in the U23 World Championships and a fourth-place finish at senior worlds, Andrew Campbell established himself as the top U.S. single sculler in the summer of 2011. At that point, Campbell’s doubles partner Will Daly was a sweep rower with his eyes set on the U.S. lightweight straight four.

But it didn’t take Daly, who said he generally “only sculled a few times a year”, long to pick up the trade, and now he and Campbell are the top lightweight double in the country. The pair will race next weekend in Lucerne, Switzerland to try to earn a spot in the Olympics.

For Campbell, the transition was natural. There is no lightweight single event in the Olympics, making the lightweight double a logical event choice for top lightweight scullers.

But for Daly it was less straightforward.

“For me, it was a really hard decision,” Daly said. “I’d invested a lot in the four and wanted to see it do well.”

But Campbell and Charley Butt, coach of both Harvard lightweight crew and the U.S. lightweight double, had identified Daly as potential partner for the sophomore. And when Butt gave Daly the invite, the 2006 Boston University graduate and former Riverside Boat Club rower decided to return to his home waters.

“It looked like the best opportunity for me to go to the Olympics and try to do well,” Daly said.

Despite the fact that Daly had done the bulk of his training in sweep boats, he advanced in sculling quickly and finished second behind Campbell in the lightweight single at the USRowing East Coast Fall Speed Order.

But as Campbell explained in the fall, speed in the single does not always translate to double dominance. And so, Campbell and Daly headed to New Zealand to search for speed.

“A couple weeks, we decided to give the flipped lineup a try and it ended up going really well,” Campbell said.

The new lineup put Daly in stroke and Campbell in the bow.

“Will is a natural racer,” Campbell said. “He thrives in a racing environment. It’s awesome to have him in stroke. It adds a level of competitiveness to our makeup.”

“Something clicked,” Daly said of the new lineup. “We struggled for a while to keep up [with the pair and quad], but after that we were right there, so we were really excited about it.”

“We got in a lot of hard steady state along with very competitive team-wide pieces,” Campbell added. “Our speed improved dramatically. Day in, day out, skirmishing with the pair forced us to be fast.”

By the time the duo arrived at the U.S. non-qualified Olympic trials, they had three regattas and months of training alongside fast national team crews under their belt.

“That gave us a big advantage,” Daly said. “We were much more comfortable, we knew what things worked, what things didn’t. By the time we got to trials, we were going through motions of what we had already established.”

On April 12, they won the regatta with over a six second margin of victory, allowing them to finally shift their sights to the goal of competing in the Olympics.

But even more so than at the U.S. trials, they are truly facing the unknown in Switzerland.

This final qualification opportunity features entries from all of the countries that were unable to qualify at the 2011 World Championships in Bled, Slovenia. The fact that none of these crews have qualified does not indicate a lack of speed. Neither Campbell nor Daly competed in the lightweight double in Bled, and other countries could similarly feature rowers who had previously competed in other events.

“It’s hard to say what the field will look like,” Campbell said. “People place a premium on going to the Olympics and will do a lot of crazy things to get there.”

“It’s going to be a hard regatta,” Daly said. “The regatta itself is very stressful. We’re going to be with people. Some are going to be in a better position, some in worse. We just have to stay in our own bubble, do what’s been working for us.”