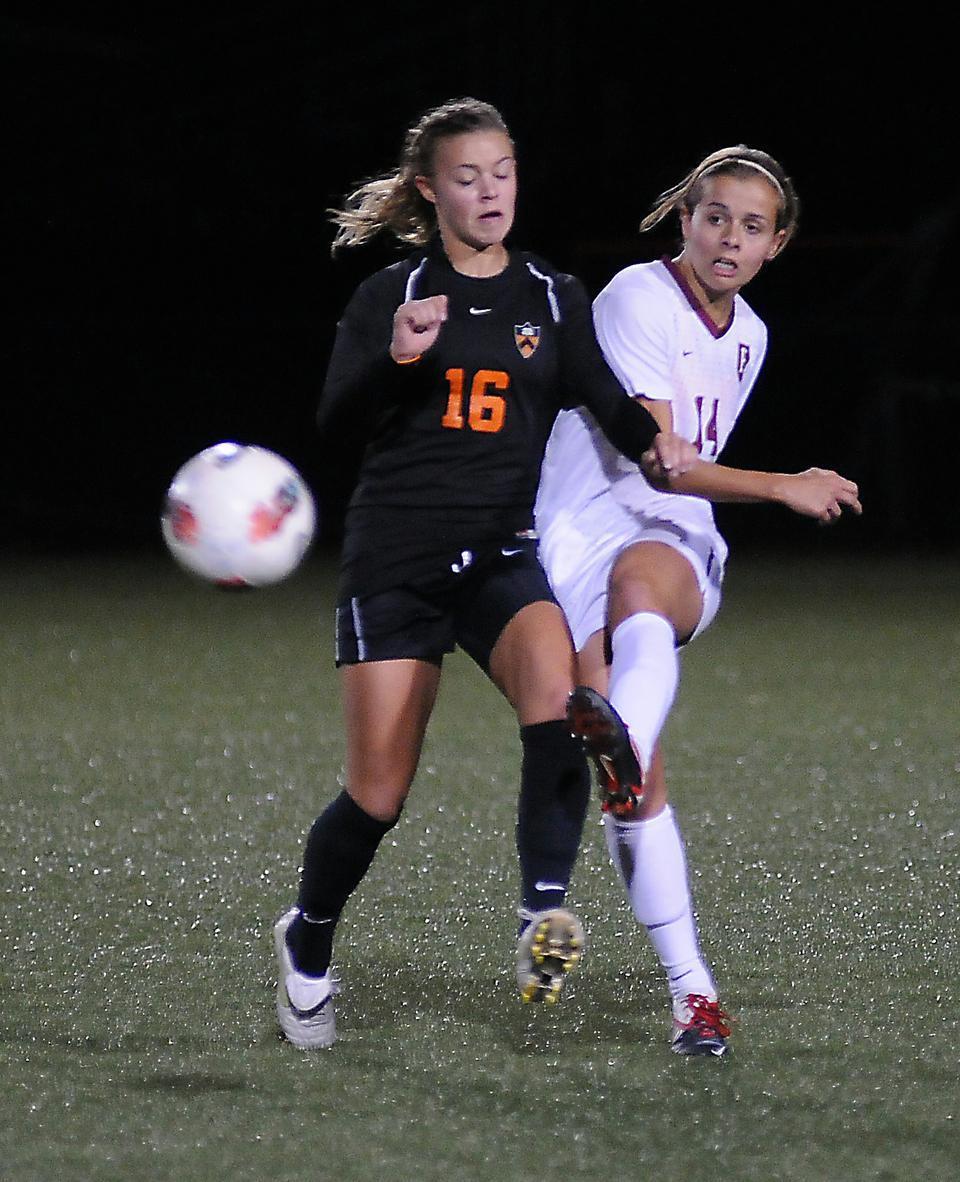 In her first game as co-captain, junior Peyton Johnson, shown above in earlier action, notched a goal and an assist in the Harvard women's soccer team's 2-0 win against UMass on Friday.
By Molly E. Kelly, Crimson Staff Writer

After wrapping up the 2011 season with its third Ivy League title in four years, the Harvard women’s soccer team kicked off its 2012 campaign without missing a beat.

The Crimson took down UMass (2-2-0) on Friday with a 2-0 victory at Rudd Field, thanks to goals from junior co-captain Peyton Johnson and freshman Haley Washburn.

The victory also extended the squad’s winning streak in regular-season play to 11 games.

“It was a good game for everyone,” Johnson said. “Sometimes first games can be chaotic, and everyone might not be on the same page, but we managed pretty well to connect passes, find each other, and at the same time expose things that we’re going to need to work on coming up.”

Johnson herself found success connecting with her teammates: just minutes into the second half, she combined with Washburn for her first assist of the season. The goal was Washburn’s first collegiate score.

“She was able to do exactly what she was supposed to do in her position, which was just hook it on target,” said Johnson of Washburn, who was named to the U.S. U-17 Women’s National Team in 2010. “It was a really awesome finish.”

“I’ve just been working a lot on improving areas I’ve struggled with in the past—looking at last year’s goals that were scored on us, breaking those down, and seeing what went wrong,” Kanten said. “A lot of it is being a leader on the field and helping out the defense so we’re all on the same page and limiting scoring opportunities.”

Kanten and her backline limited UMass to eight total shots on the afternoon compared to Harvard’s 19 total attempts and 11 on goal.

“For our first game and [for] not having played real opponents yet, and UMass already [having] had [four] games before this…for us to come out and win and play together like we had been together just as long as they have was really great,” Kanten said.

“Getting your first win under your belt, we know how it feels. Now the freshmen have their first win, which is big for them,” she explained. “It gives us the confidence we need to go forward without having to stress too much about a loss.”

Johnson also scored her first goal of the season—a free kick into the top left corner with just under 20 minutes of play left.

“There was a foul outside the box, maybe five or 10 yards outside the box, and that’s usually a pretty good place to have an opportunity,” Johnson said. “We had practiced a few this first week, and I was able to take one from there. It was a good chance.”

Following Johnson’s goal, the Minutewomen countered with one final shot from sophomore midfielder Moa Mattsson, who scored her team’s only goal in its season opener against No. 6 UCLA. But Kanten stopped the shot for her fifth and final save of the day.

With only a few weeks before Ivy League play begins, Kanten and her team are happy with the win but aware of the work that lies ahead.

“We’re going to have a lot of people in different positions,” she said. “We have a ton of talent and everyone works really hard, but we don’t know where people fit into the puzzle to make the best possible team. So I think that’s a challenge we’re going to have to face, but I think it’ll be fun to figure out where everybody fits.”

Johnson also hinted that the team cannot rest on its early success.

“Because it’s the first game, you can’t allow yourself to think too much about the result or anything beyond just starting well and getting the kinks out,” she said. “We can’t focus on the result because that’s not what matters in the first game.

“We got a win but we also have things we need to work on, “Johnson added, “and I think that’s a great position to be in.”

—Staff Writer Molly E. Kelly can be reached at mkelly@college.harvard.edu.