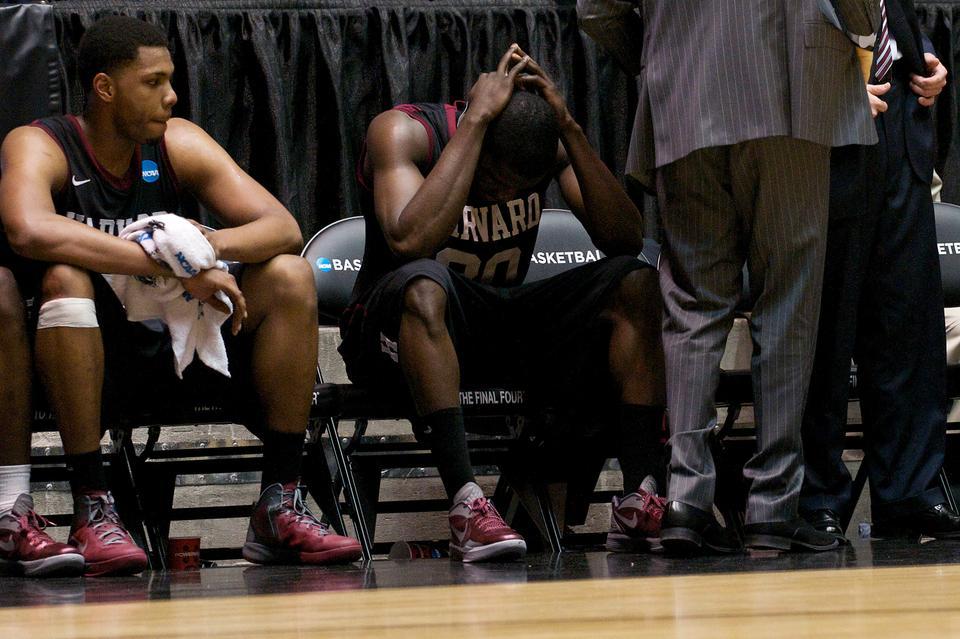 A distraught Kyle D. Casey '13 clasps his head in his hands in the waning moments of the Harvard men's basketball team's 79-70 loss to Vanderbilt in last year's NCAA tournament. Implicated in the Government 1310 cheating scandal, Casey has decided to withdraw from the College, according to Sports Illustrated.
By Robert S Samuels and Scott A. Sherman, Crimson Staff Writers

Men’s basketball co-captain Kyle D. Casey ’13 has chosen to withdraw from Harvard because of potential disciplinary action relating to the investigation of the Government 1310 cheating scandal, Sports Illustrated reported early Tuesday morning. The Boston Herald later reported that fellow co-captain Brandyn T. Curry ’13 is also implicated in the scandal and likely to take a leave of absence as well.

Casey is expected to miss the 2012-13 basketball season, as is Curry should he decide to withdraw.

Leaving the College before Tuesday’s study card deadline would likely protect both players' fourth and final year of Ivy League eligibility, allowing them to return for the 2013-14 season. If the players had been forced by the Administrative Board to take a leave of absence after they had already registered for classes, they would have lost the year of eligibility.

Both Casey and Curry did not respond to multiple requests for comment.

In an internal email between College administrators obtained by The Crimson—which a resident dean confirmed was sent to other resident deans—Secretary of the Ad Board John “Jay” L. Ellison suggested that fall athletes might “consider taking [a leave of absence] before their first game.”

Casey, who led the Crimson in scoring as a junior, was expected to contend for Ivy League Player of the Year in 2012-13. The 2010 Ivy League Rookie of the Year, he has averaged double-digit scoring totals in each of his three seasons at Harvard and his offensive load was expected to increase in his senior season.

Curry, a two-time Academic All-Ivy honoree, paced the Crimson in assists and steals and was fourth on the team in scoring a year ago.

Both played a pivotal role last season in helping Harvard earn its first NCAA tournament berth since 1946. They were expected to provide veteran leadership for a squad that had been predicted to be a strong contender for its third consecutive Ivy League title in 2012-13.

With Casey’s departure and the graduation of Keith A. Wright ’12, the Crimson will be forced to rely inside on forwards E. Steve Moundou-Missi ’15, Jonah A. Travis ’15, and Kenyatta A. Smith ’15, none of whom have ever started at the collegiate level. If Curry withdraws or does not play this season, Siyani T. Chambers ’16 will likely handle the bulk of the point guard duties.

Such an event would leave wing Laurent Rivard ’14 as the only returning starter from Harvard’s NCAA tournament team. Wesley S. Saunders ’15—who led the team in scoring during its summer trip to Italy—would also pick up a much larger offensive load.

The men’s basketball team is not the only athletic squad affected by the cheating scandal, in which about 125 students have been implicated. The Harvard football team is also dealing with fallout from the incident, and at least one key offensive player will miss time due to the investigation—a loss nonetheless less severe than the withdrawal of forty percent of a five-man starting lineup.