Harvard Kicks Off Against Unfamiliar Foe 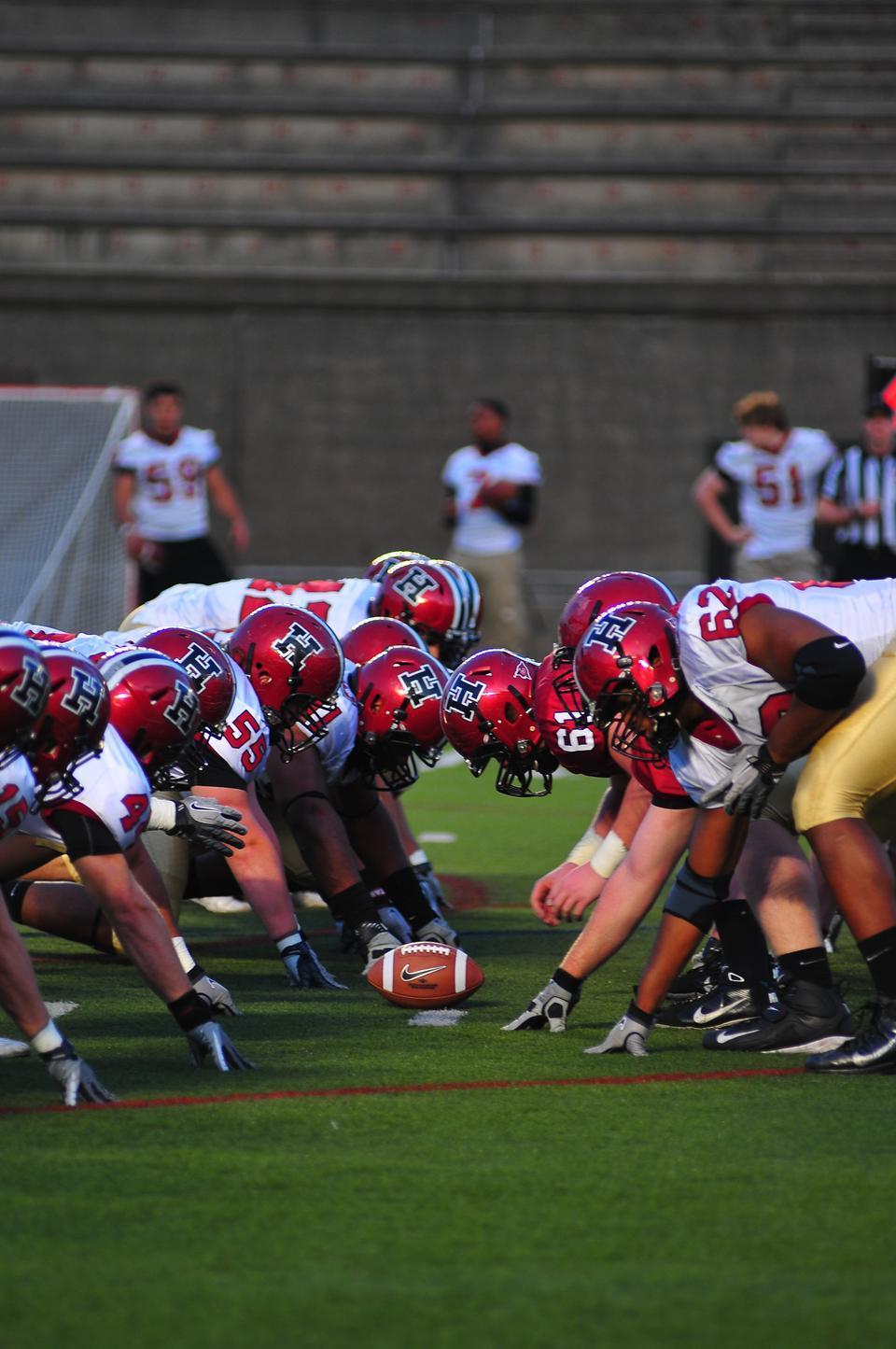 The Crimson, shown here in its annual spring game, will open the 2012 season at home against San Diego on Saturday afternoon. The two teams have never met, but the matchup with Harvard will be the Toreros’ ninth time facing an Ivy opponent, the most recent of which was Yale in 2006. By Shunella Grace Lumas
By Shayna Price, Contributing Writer

Last year Harvard football scored 374 points, setting a Crimson modern era record.  This Saturday’s home opener against the University of San Diego Toreros will tell if Harvard can do just as well this season amid changing lineups.

Perhaps one of the biggest questions will be if newly starting senior quarterback Colton Chapple will permanently fill the shoes of graduated quarterback Collier Winters ’11.  Filling in for an injured Winters last season, Chapple won two Ivy League Player of the Week awards and became the first Crimson quarterback ever to throw for four touchdowns in consecutive games.

“You could literally say every good word in the book about Colton and his dedication towards the game,” said senior center Jack Holuba. “I love the way Colton plays. He plays within himself, doesn’t try to do too much, [and] makes the smart decisions.”

Another big change comes at wide receiver, where the Crimson graduated its top three players in Adam Chrissis ’12, Chris Lorditch ’11, and Alex Sarkisian ’12.

“Losing a lot of receivers always—it’s a concern. Whenever you lose a lot at one position makes it a concern,” said senior running back Treavor Scales last week.

Filling in the gaps will be players such as sophomore Seitu Smith II and juniors Andrew Berg and Ricky Zorn who are largely untested after seeing limited action last year.

“Most notably [making strides] was our receiving corps,” said senior tight end Kyle Juszczyk. “I think guys like Andrew Berg and Ricky Zorn...really, really improved this summer. I think they really benefitted from being here.”

Despite losing several key players, Harvard will return 17 starters and 47 letter winners. Two of those are the offense’s most productive players from a year ago—Juszczyk and junior Cam Brate.

Last year Juszczyk, who won the College Football Performance Award as the nation’s top tight end, caught 37 passes for 512 yards, while Brate added 25 receptions for 386 yards. The teammates also tied for the team lead with seven touchdowns each.

Another weapon on the offensive end is Scales, who finished last year with eight touchdowns and 816 yards on just 170 carries.

“Having Treavor Scales in the backfield with you doesn’t hurt you at all,” Chapple said. “The kid’s been All-Ivy since his freshman year. He’s a complete back who can carry the ball 20 plus times a game. He can catch out of the backfield. He can pass protect—he can do it all.”

Holuba, one of Harvard’s 16 players to be named to the Preseason All-Ivy Team, will be a steady force in the Crimson’s offensive line.

“Bobby is a warrior,” Holuba said. “He is the most technically sound football player I have ever seen in my entire life. [He’s] the guy who has been in exactly the perfect position at every moment on every play.”

On special teams, senior punter Jacob Dombrowski and junior kicker David Mothander will be back on the field as well.

The Crimson has won the last 11 home openers and beat 20 of its last 27 non-league opponents dating back to 2003.

Harvard has never before faced San Diego, but the Toreros have a 2-6 record against teams in the Ancient Eight. The last Ivy team to face San Diego was Yale in 2006, and the Toreros won 43-17.

Along with the Crimson, San Diego was ranked among the Football Championship Subdivision’s top 10 in winning percentage last season.

The Toreros have already played two games this season. In its most recent game, San Diego pulled out a 34-27 come-from-behind victory over Western New Mexico, but the Toreros lost their home opener, 41-14, to Cal Poly.

Going into Saturday’s game, the Crimson is a 21-point favorite and also the favorite to repeat as Ivy League Champions after receiving 13 of 15 first place votes in the Ancient Eight preseason poll.