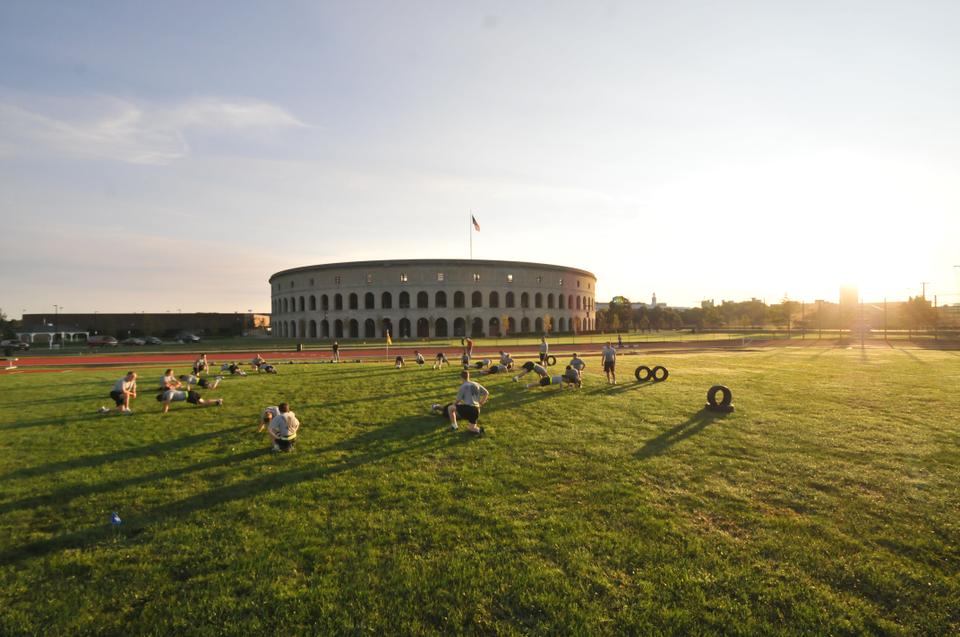 Students from Harvard, MIT, and Tufts broke into pairs for some of their exercises like sit-ups and push-ups during their 6:30AM practice on Monday morning at McCurdy Field in Allston.
By Hana N. Rouse and Justin C. Worland, Crimson Staff Writers

For the nine Harvard College students participating in the Army Senior Reserve Officer Training Corps, the University’s decision to offer physical training exercises on Harvard’s campus after a more than 40 year absence shaves a sizable distance off a morning commute to MIT or Tufts. But for those who followed ROTC’s long road back to Harvard’s campus, the symbolic significance cannot be measured in miles.

Army SROTC students from Harvard previously had to commute to MIT or Tufts to attend all of their tri-weekly physical training practices. Now, more than five months after Harvard officially recognized the program, students from Harvard, MIT, and Tufts attend one of their 6:30 a.m. practices at Harvard’s McCurdy Outdoor Track—which they did for the second time this past Monday.

“We’ve actually been working with Harvard for years,” Edwards said. “The students used to come to MIT, so this is really just kind of a building on that relationship and ultimately, the physical reality is that it just makes it easier...for the students to take classes on their own school campus.”

Cadets must take one classroom-based military course each semester of their training—a requirement which they previously had to fulfill off-campus, usually through classes at MIT.

According to Edwards, the on-campus military science class, which is being offered on a trial basis, “provides some convenience” for his students.

“Although Hilles is still a little bit removed from maybe some of their classes,” he added.

Will J. K. Scopa ’15, who joined Army SROTC last year prior to the program’s official recognition, said that, overall, this year has not felt dramatically different from last.

Still, Scopa, a Crimson business editor who is one of three sophomores in the program, said that “it’s good for our school to be identified in a positive way with the military.”

And Harvard has received that recognition. A variety of national media outlets, including the Wall Street Journal and Fox News, covered the return of practices to campus. Even on Monday, a week after the first Harvard training exercise, a CNN contingent could be seen on the field.

Army is the second branch of ROTC to be welcomed back to Harvard’s campus. Harvard recognized Naval ROTC in March of 2011, but has yet to do the same for the Air Force.

Captain Steven M. Benke, who heads the MIT, Harvard, and Tufts battalion of NROTC, stressed the importance of Harvard’s history with public service.

“We believe it’s in the University’s interest and in our interest to increase visibility.... It’s very positive that we have a good relationship going forward,” Benke said. “If we look back, you don’t have to look very far to see how important Harvard students have been to the Navy and to the government as a whole.”