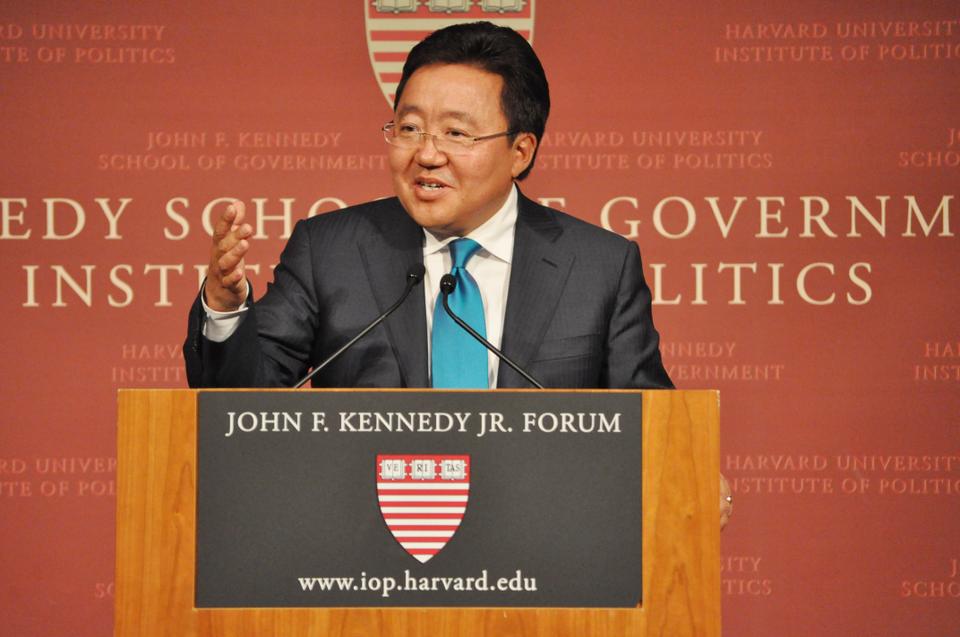 President Tsakhiagiin Elbegdorj of Mongolia discussed corruption, human rights, and his success in revitalizing his home country at the Institute of Politics on Friday.

Championing the cause of the peaceful democratic revolution he launched to overthrow the long-standing communist regime in Mongolia, Elbegdorj offered a forceful diatribe against the widespread corruption in government that he successfully fought against, twice as prime minister and now as president.

Speaking to a packed audience in the John F. Kennedy Jr. Forum, Elbegdorj dubbed Mongolia as the current world leader in freedom, referring to it as the “democratic anchor of the east.” He encouraged

Having graduated from the Harvard Kennedy School with a Masters in Public Administration in 2002, Elbegdorj called it a “high honor to return to Harvard” after ten years. He stated that he “still ran on

Harvard fuel” even now as a head of state. Elbegdorj also referenced Harvard landmarks like the COOP in his speech.

“Ten years ago, I bought t-shirts for me,” he said. “Now...I bought some t-shirts for myself and my children—25 t-shirts,” he added to laughter, referencing his five biological and 20 adopted children.

Elbegdorj also noted the strong diplomatic ties between the United States and Mongolia. He mentioned one incident in which he had to write a letter to prevent a stolen Mongolian dinosaur fossil from being auctioned off in America. Upon recounting this incident to Secretary of State Hillary Clinton, he said to her, “Now, in this age, we only have one dinosaur—called corruption.”

Elbegdorj also took the time to poke fun at the popular photograph of multiple heads of state, in which President Barack Obama accidentally blocked Elbegdorj’s face when waving his hand at the camera. The photo went viral in the fall of 2011.

“President Obama’s hand can cover my face, but his hand is not going to cover my country,” he said.

Mahuad noted the importance of having three heads of states at one event, but also mentioned the pleasure he received from seeing Elbegdorj, a former classmate of his in HKS.

‘“We need to make sure that people have the power and that there is transparency and accountability in government,” he added.

In an interview with The Crimson, Elbegdorj stressed the importance of personal liberty in a free and democratic country. Elbegdorj mentioned how the “love of personal freedom” was a strong theme is his life even from childhood where he was one of eight children. Elbegdorj also explained Mongolia’s strategy for the Olympics, a source of pride for Mongolians given that the 2012 London Olympics was the most successful

in the nation’s history.

“I made a very historic decision,” he said. “Every month, we will give cash to our athletes for their lifetime if they get medals in the Olympic games.”

—Staff writer Sagar Desai can be reached at sagardesai@college.harvard.edu.