Maschmeyer Ready to Shine in Spotlight 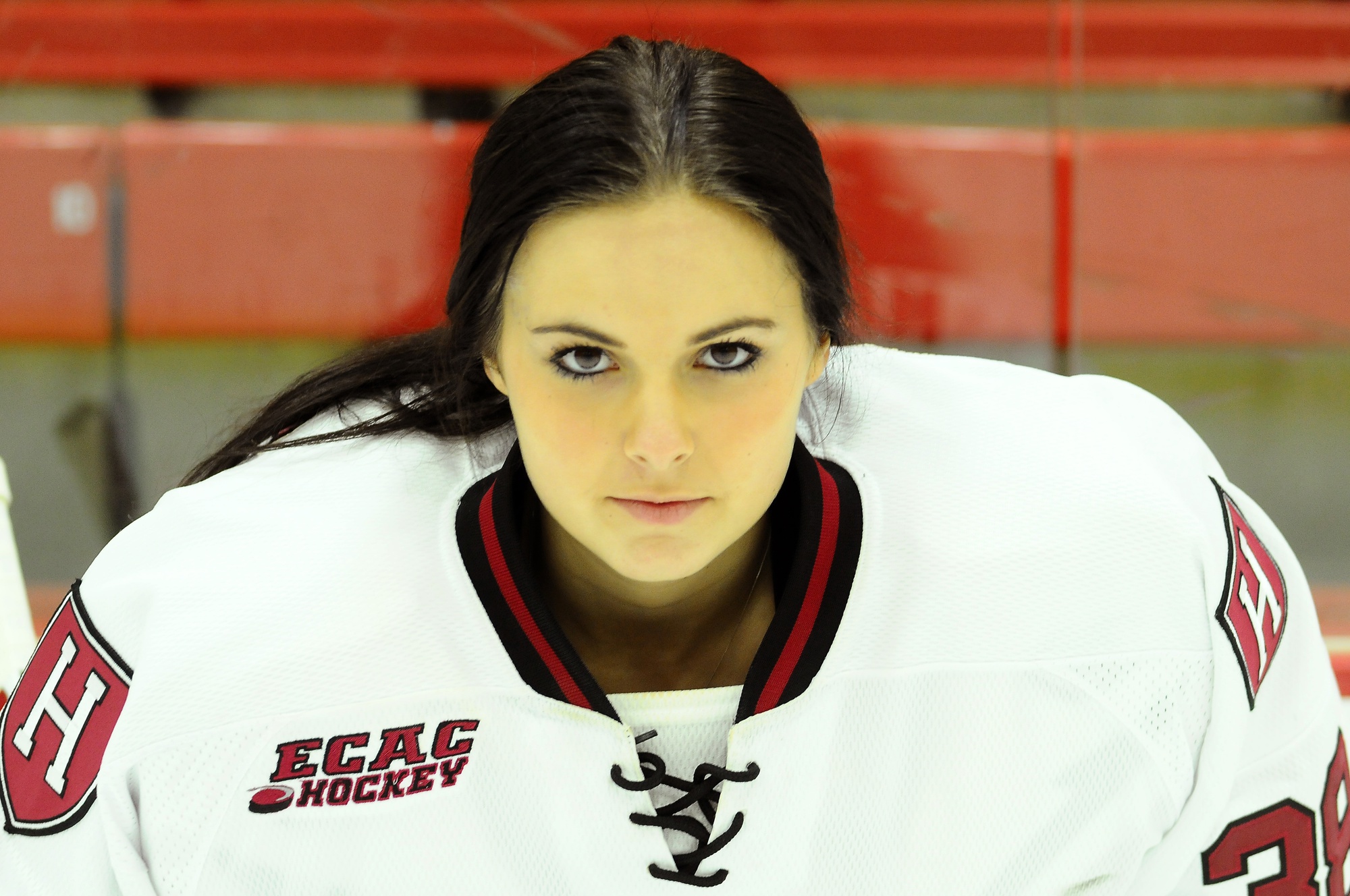 With Laura Bellamy '13 behind the bench as a coach, it is now up to sophomore Emerance Maschmeyer to protect the net.
By Daniel A. Grafstein, Crimson Staff Writer

A year ago, the stage was set for freshman goaltender Emerance Maschmeyer to thrive, with mentors in senior goaltender Laura Bellamy ’13 and legendary coach Katey Stone.

This season, Maschmeyer will have to do without the winningest coach in Division I history and one of the most notable goaltenders ever to don Crimson.

Bellamy achieved history, finishing second in program history with 19 career shutouts, but was in part overshadowed by Maschmeyer, who took the reins at the end of the season and led the Crimson to its first NCAA tournament in four years.

“Maschmeyer is a really incredible player,” sophomore forward Miye D’Oench said. “She is so incredibly focused.”

Today, her mentor is behind the bench as an assistant coach watching the goaltender who exceeded the high expectations set for her.

“I think she has a really incredible balance of business and fun that makes her a really great player,” D’Oench said. “She is able to lock in and focus on a game without letting all the seriousness throw her off.”

After a successful campaign with the Canadian national team, the incoming freshman got off to a red-hot start, allowing four goals in her first six games.

In her tenth start, the freshman finally lost her first game, 3-1.

The two-goal margin proved to be the largest Maschmeyer would let her team lose by the entire season. In fact, the Crimson’s netminder lost just three of the 20 games she started by more than a goal and did not let up more than three goals in a single game all season.

After the loss, Maschmeyer bounced right back. From her next game in early February, she got to showcase her skills consistently, starting all but two of the Crimson’s remaining 13 games.

Maschmeyer looked particularly at home in the Bright-Landry Hockey Center where she allowed just eight goals in eight games.

This season will present a whole new set of challenges for the sophomore looking to build on her success.

In addition to losing Bellamy and Stone, Harvard will have to fill the void left by co-captain and national team member Josephine Pucci and fellow seniors Lyndsey Fry and Michelle Piccard, who are also spending this year playing for the U.S. national team.

Around the league some of the key scorers who gave Maschmeyer fits are returning.

Carly Mercer of Clarkson and Jessica Campbell of Cornell, each of whom had multiple-goal games against Maschmeyer last season, will be back and facing the Crimson six days apart in mid-November.

While the incoming freshman class features help in the form of standout goalie Brianna Laing and defender Briana Mastel, the goaltender will be working with a team that returns only 11 upperclassmen.

“We have a very young team,” Maschmeyer said. “It means everyone is going to have to contribute.”

And while all indications point to Maschmeyer being in the driver’s seat for the starting goaltending position, it is still up for grabs.

“It’s a whole new year, so I have to prove where I stand again,” said Maschmeyer, who said she views the competition as an opportunity.

“It’s great that I have competition within the team,” Maschmeyer added. “It pushes us to get better.”

Maschmeyer has grown close with the classmates and teammates she has learned to rely upon.

“It’s really interesting,” D’Oench said. “We are in some ways very spread out but very close.”

While the goaltender may play in net, she is an integral part of the team’s offensive production, allowing the team to take more risks in the offensive zone.

“If you make a mistake you are not going to panic because you have somebody that you really trust behind you,” D’Oench said.

And while the squad is focused on taking the season one game at a time, it is not hard to imagine the goaltender once again coming up big in big games in the not-so-distant future.

Last season, Maschmeyer recorded back-to-back shutouts against Dartmouth to lead the Crimson to the ECAC semifinals.

Whatever the case may be with a year under her belt and the confidence of her team, Maschmeyer seems poised to succeed.

“I am very confident going into the season,” Maschmeyer said. “I know we are going to do great.”

—Staff writer Daniel A. Grafstein can be reached at dangrafstein@gmail.com.