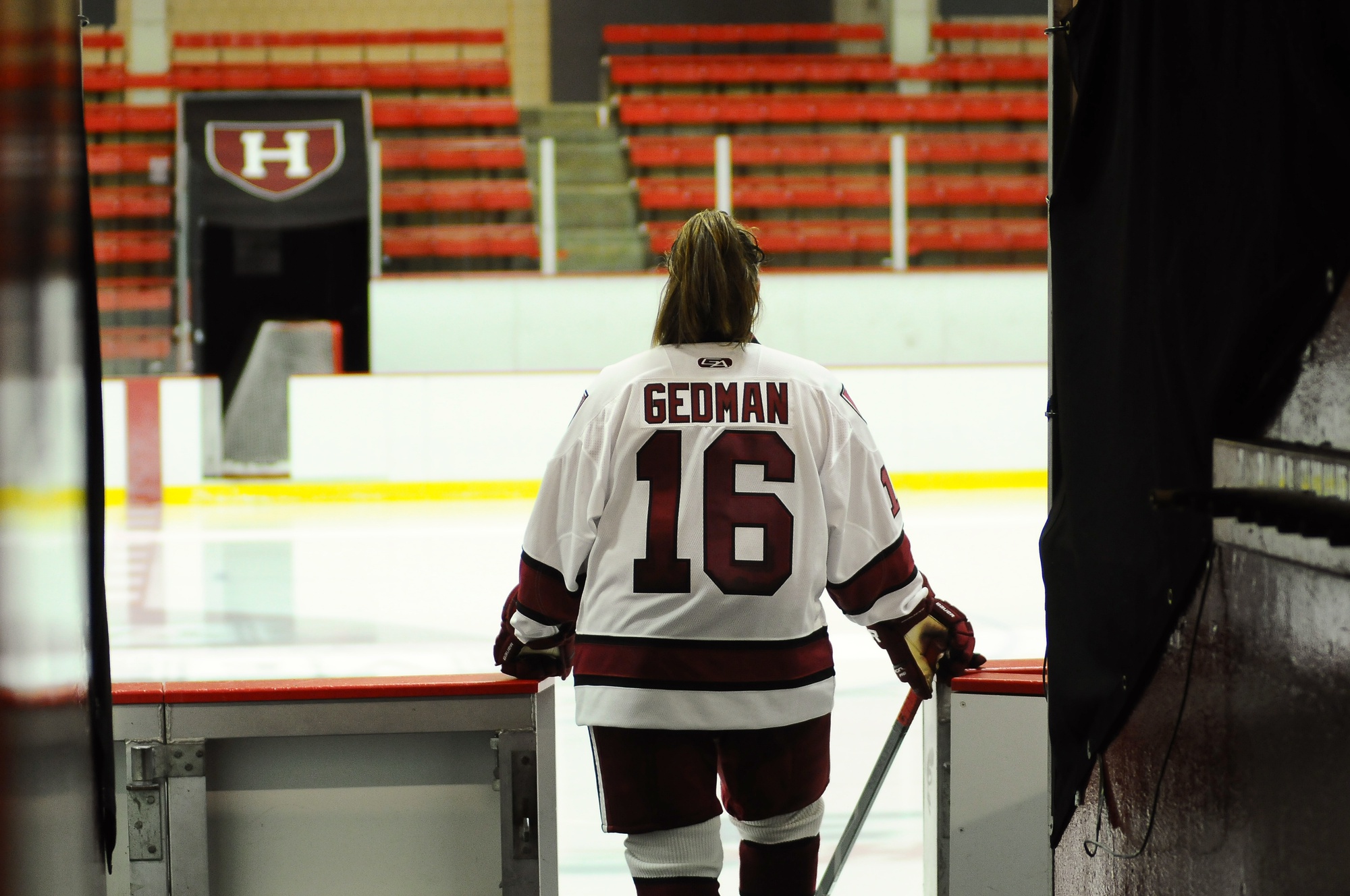 Junior Marissa Gedman’s 2012-2013 season ended facedown on a track during an early morning workout in mid-September.

The defenseman had spent the summer pushing herself to the brink, attempting to take her game to the next level. A potential Olympic tryout lay on the horizon, not to mention her third season with the Harvard women’s hockey team.

“I was training really, really hard, trying to get into the best shape of my life,” Gedman said. “It was all or nothing.”

On Sep. 14, after stretching herself for months, Gedman snapped. Literally.

Running a 10-20-30 shuttle drill, she fell in a heap. At first, she just thought her shoe had fallen off. She tried to get up and finish the drill. But then she fell again. Her Achilles tendon had ruptured and rolled up her calf.

“A lot of people describe it as a gunshot,” Gedman said. “It’s a weird injury.”

Within a week, surgery kicked off Gedman’s yearlong rehabilitation program. She withdrew from school to preserve her eligibility before heading home to Framingham, Mass., where she was bedridden for weeks.

But Gedman came back to Cambridge often. As she walked to Bright Hockey Arena on Oct. 20, 2012, she thought she was excited to watch her team begin its season. She sat in the stands where her family always positioned itself, directly across from the home bench, so she could see all of the players.

Then Gedman started to cry. She could not stop.

“I started bawling and I was like, ‘Wow I didn’t expect this,’” Gedman said. “I thought I was ready, but I guess I wasn’t.”

She continued going to all of the Crimson’s games, but watching from the stands never stopped feeling weird.

“I’m getting the chills thinking about it now,” Gedman said. “I never liked it and I never want to do it again.”

But Gedman was not alone on the sidelines. She was able to lean on teammate Josephine Pucci, who missed 2012-2013 with a head injury, during the rehab process.

“I don’t know if I could have done it without her,” Gedman said. “I owe a lot to her just for getting me up in the mornings.”

Gedman added that she never had to search very far for motivation. She was hungry to return to the Crimson stronger than before, and also still had her eyes set on a potential Olympic tryout.

By January, she was skating again—ahead of her rehab schedule.

In the spring, she went to a tattoo parlor to immortalize the ordeal. Next to the scar on her heel, “Persevere” was etched alongside an arrow.

“An arrow can only be launched forward if it’s pulled backward,” Gedman explained. “It’s like a metaphor for turning a setback into a comeback.”

Without Gedman and Pucci, Harvard finished second in the ECAC Tournament and lost in the first round of the NCAA tournament. At the team’s end-of-year banquet, Gedman was named as one of three captains for 2013-2014.

Despite Gedman’s recovery efforts, she did not get an invite to the Olympic tryout. Instead, she returned to Harvard as its only remaining captain. Co-captain Josephine Pucci made the Olympic roster, along with senior Lyndsey Fry and junior Michelle Picard, while the other co-captain, Kalley Armstrong, will miss this season with an injury.

That leaves Gedman to lead a young team that includes just two seniors. Her blueline is even less experienced outside of preseason All-Ivy junior Sarah Edney. Thus far, Gedman has spent much of her time working with a freshman partner at the other defenseman position.

Though she is only a junior, the co-captain explained that the adversity she has faced over the last year has helped her grow more experienced.

“Perspective is expensive,” Gedman said. “Yeah, the year sucked, but being back here now I just see everything so differently…. It was a blessing in disguise.”

Interim coach Maura Crowell has seen a change in Gedman, as well.

“It stinks to go through it,” Crowell said. “But I think the things that she has learned and taken from it have been pretty powerful.”

On Friday, Gedman will return to the ice in a varsity game for the first time since the spring of 2012.

“I’ve been looking forward to this day for so long,” Gedman said.

She is excited to stand on the other side of the Plexiglas boards, looking up at her mom in the stands rather than her would-be teammates on the ice.

She’s ready to be a Harvard hockey player again.